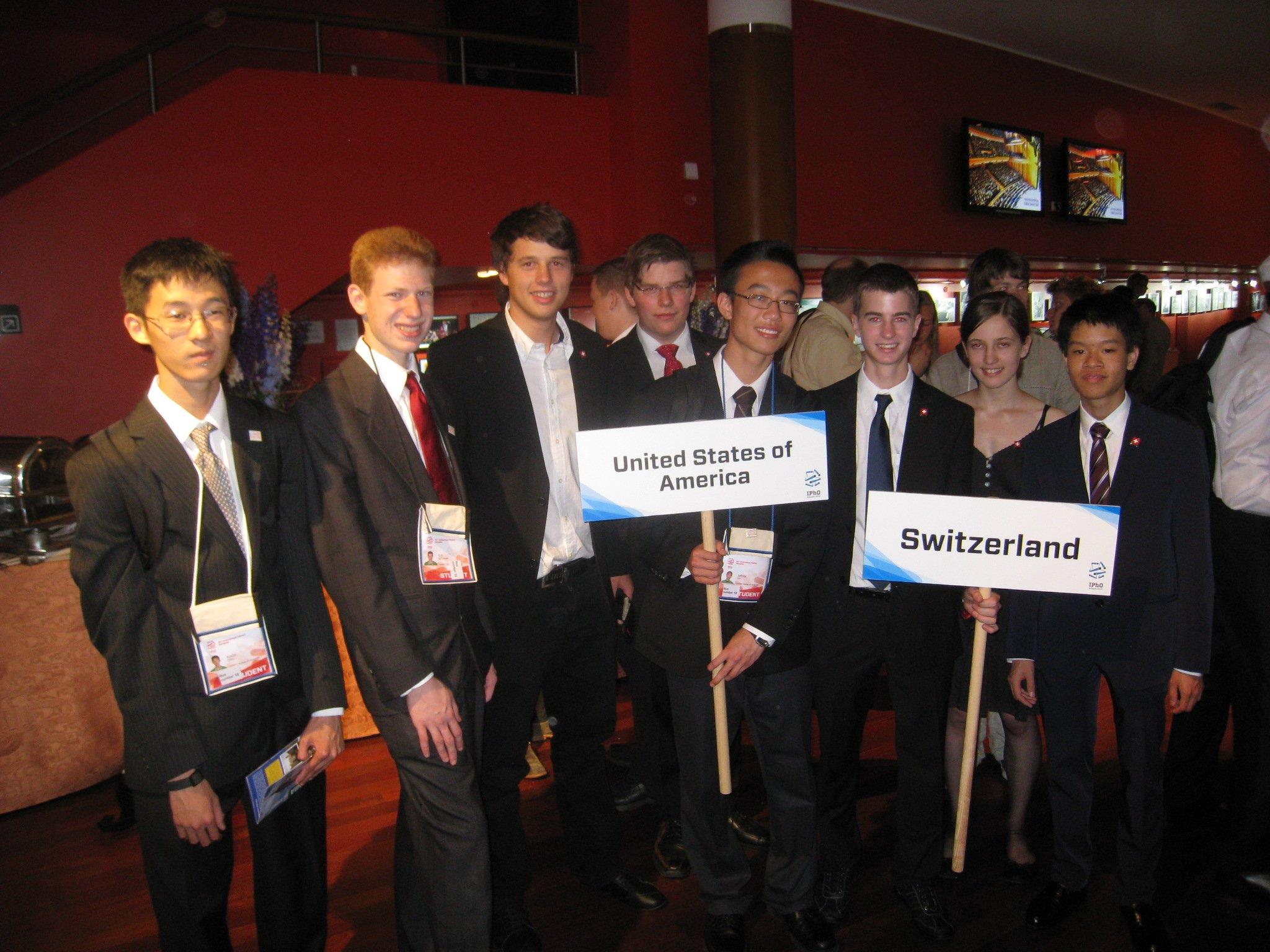 Jeffrey Yan poses with the rest of the United States team as well as the Switzerland team.

It went from thousands to twenty, then twenty to five. Only five. Five in the nation were chosen from a medley of students to represent the five of the best by proving their abilities in physics. Among these students was senior Jeffrey Yan, who represented the United States in the International Physics Olympiad (IPhO) this past summer, from which he returned a silver medalist.

The 43rd IPhO was held this past summer in Estonia from July 15 to July 24, during which time five students from each participating country competed. After intense competition, senior Jeffrey Yan came out of the Olympiad as one of the silver medalists.

“[Participating in the Olympiad] was really fun, but the test was really hard, and the lab was really hard,” Yan said. “It was a good experience, just meeting others. It was weird because physics, especially at Paly and even in the U.S., is not a really big thing. It’s not like math or sports or anything where a lot of people do it, so it was really eye-opening. I realized there’s a huge community out there that likes physics.”

Potential attendees of the IPhO must pass a selection process to first attend the camps. To do so, Yan was one of the top scorers in the preliminary competition, the F=ma exam held in January, advancing to the semi-finals, after which he was chosen to be one of the 20 to attend the first U.S. Physics Team training camp.

“I didn’t think I’d make the camp,” Yan said. “Every step of the way I was just like, ‘Alright I’ll see what I can do now.’ But after the camp, I prepared a lot for the International Olympiad.”

The first U.S. Physics Team training camp was held at University of Maryland-College Park in early June and lasted 10 days. The 20 participants, including Yan, worked on labs and took tests to be chosen for the IPhO. At the end of the camp, the top five students were selected to participate in the IPhO and to return for the second camp.

But, the camp was not just all work and no play. Even though the students did labs for hours on end, the group of 20 students still managed to enjoy themselves through work and other activities. Attendees, including Yan, made new friends from all over the country.

“The camp was really fun, especially the first camp,” Yan said. “We played frisbee and went to restaurants. It was a good contrast between really cool and intense physics and meeting new people.”

Through lab work and tests, Yan managed to place himself at the top of the group, proving his abilities and talent in the subject and receiving a coveted position on the U.S. team.

“I was really surprised that they announced my name because there were so many smart people there,” Yan said. “I was just there for the experience.”

Those chosen for the traveling team returned for a second U.S. Physics Team training camp for three days of intensive work focused on preparing for the IPhO. The students participating in the camp worked for up to 13 hours total on labs to prepare. On top of the labs, Yan took previous Olympiad tests for hours a day as practice.

“Normally you have six weeks to study, but this year the Olympiad was really early so we had three weeks,” Yan said. “They told us to do as much physics as we [could]. By the end, I was almost sick of physics, but I was just remembering that it was going to be really fun, and I wanted to do as well as I can.”

According to Yan, his success in physics stemmed from his first physics class: Mr. Leonard’s Advanced Placement Physics C. Last year, Yan was one of three juniors in the AP Physics C class.

“I definitely enjoy it [physics],” said Yan. “I started learning it last year in AP Physics and the summer before, I kind of looked into it.”

Yan’s talent and diligence in the subject showed in the class and generated attention from his peers as well as his teacher, Mr. Leonard.

“I thought [IPhO] was a wonderful product of really hard work,” said Leonard. “Jeffrey’s a very hard worker. He was one of the hardest workers. He’s also very quick, which is good when in a competitive situation.”

Yan’s international accomplishment at the IPhO, after he focused on physics for only around a year, impressed his family and friends.

“It’s absolutely amazing for Jeffrey to achieve so much in just a year,” Rachel Tsong, Yan’s mother, said. “We are of course very proud of him.”

Jeffrey Yan’s journey from his Paly classroom to the international competition in Estonia increased his knowledge and delight in physics. His success and achievements in the competition and in the subject in general evoked pride from those around him: his teachers, his family and his peers.

“I think it’s really cool that Jeffrey Yan made the U.S. Physics Team and did so well at IPhO,” senior Jeffrey Ling said. “It’s really hard to be not just top five in the country, but one of the best in the world.”