Gunn senior Roya Huang films a vectors video, along with other physics videos, to help students

Summer break is often seen as a time to forget about school, relax and have fun.
For two Henry M. Gunn (Gunn) students, however, the summer of 2012 was an opportunity to launch a student-run website designed to benefit students that struggle with certain classes at school. Similar to Sal Khan’s “Khan Academy,” Club Academia, created by Gunn junior Shilpa Yarlagadda and senior Roya Huang, is a non-profit company that provides students with video tutorials in subjects such as statistics and biology.
Starting by simply creating physics videos for Advanced Placement (AP) Physics students worried about the end of year exam, Yarlagadda and Huang are now in charge of a company that recently received a grant of $1,000 from Google and Khan Academy.
It recently went public in early November. The idea came when Stanford University computer science professor Mehran Sahami spoke to Gunn students one day.
“I approached him after his speech and asked him about making video tutorials,” Yarlagadda said. “I never expected to create a company out of it, but now he is part of our unofficial board of directors.”
Club Academia selects high school students that have recently finished a course to provide tutorials. This way, the material is fresh in the tutor’s mind.
According to Yarlagadda, the focus of Club Academia is to provide easy access to supplemental information to help students ace a test or simply do better in a class.
“We want to make learning accessible to anyone no matter where you are,” Yarlagadda said. “And we also want to create a supplement for outside of the classroom so students can understand the material better. “
Yarlagadda believes that making the videos concise keeps the tutorials entertaining and lessens the chance of a student getting bored.
“The biggest thing we try to do is make our videos very short and concise,” Yarlagadda said. “Unlike Khan Academy, where the average video length is 10-12 minutes, most of our videos are below three minutes.”
The motto of the company is reminiscent to something familiars: “of the people, by and for the people.” Club Academia staff hope to align with the Palo Alto Unified School District (PAUSD) goals and values of supporting all students in all their academic subjects.
With many for-profit tech companies in Silicon Valley, Club Academia is unique because it is a non-profit company.
Because Club Academia is already well-known to the Gunn community, students and teachers have already begun using and asking for the beneficial videos.
Algebra 2 teacher Daisy Renazco sees Club Academia as a potential benefit for all her Algebra 2 students, though currently Club Academia has not made any videos for Algebra 2 yet.
“I think Club Academia could really help some students that need to clarify their understanding of the material,” Renazco said. “I have seen the videos and I love that the videos are made by students.”
Though a new company, Club Academia has already been successful in moving forward and reaching out for support.
According to Yarlagadda, over half of the students in the Focus on Success classes at Gunn are currently using Club Academia.
Moreover, Yarlagadda and Huang have met with Sal Khan after the two students won the “Khan Hangout” competition, in which selected participants attend a three-day workshop at Google.
Yarlagadda hopes to keep moving forward and expand to a wider audience, while keeping a high quality standard.
“In the future, we hope to expand Club Academia so that anyone can post videos,” Yarlagadda said. “Before we do this, however, we really want to set a high standard.”
Rachel Lew, a current Gunn student and staff member for Club Academia, is optimistic about the company and feels that the website is helpful for both the tutor and the tutee.
“I’m extremely impressed with how quickly Club Academia has reached its current level of success,” Lew said. “I have used the statistics videos and found them to be very helpful. Even just making videos for other classes has helped me understand the material better.”
What started as a simple idea has now turned into a more complexstudent-run company with support from PAUSD superintendent Kevin Skelly, in addition to Google and Khan Academy, according to Yarlagadda.
Club Academia can be a beneficial resource to Paly and Gunn students alike, both for students who want to make videos and for those who would like to learn from the videos to help the students understand the material better
“We really want a strong following within Gunn and Paly,” Yarlagadda said. “The biggest challenge that we are going to face is how to reel in so many new recruits yet maintain our quality.” 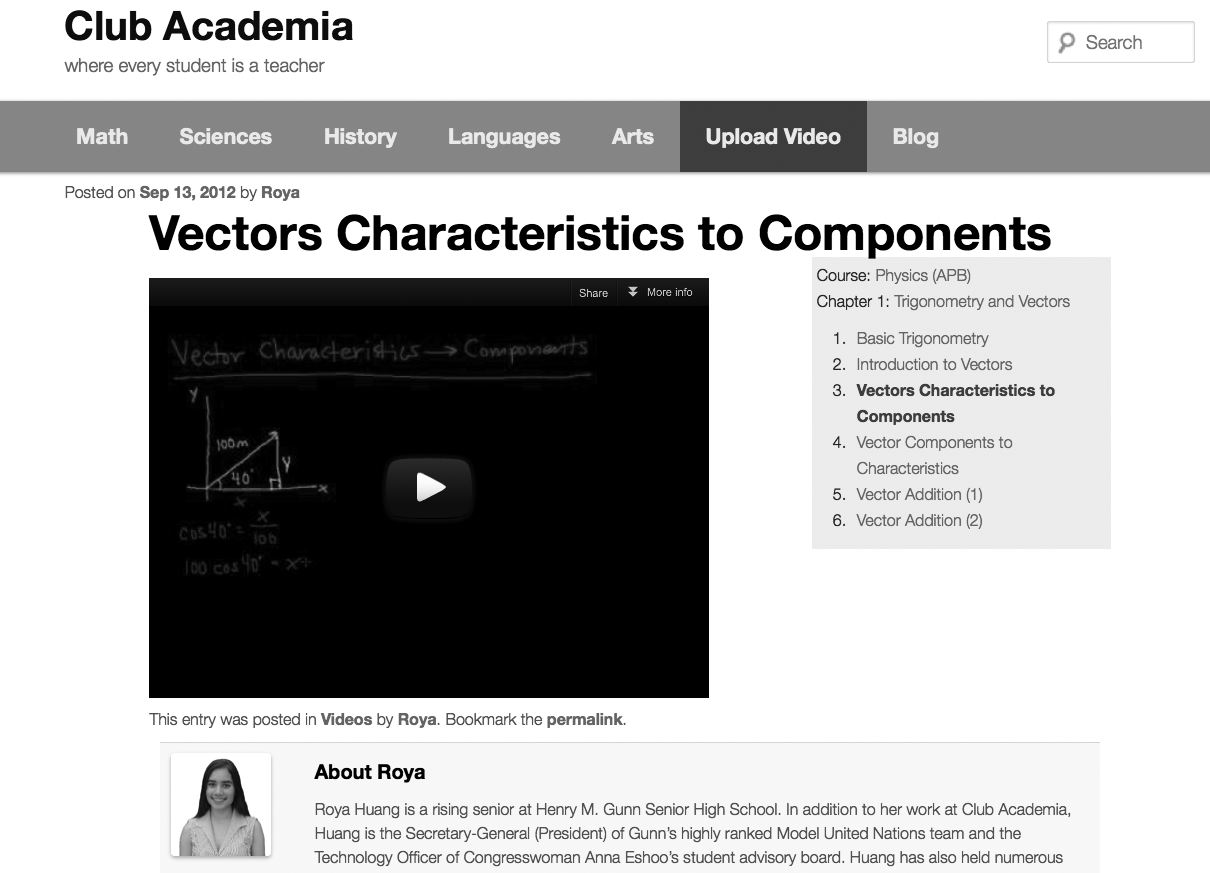