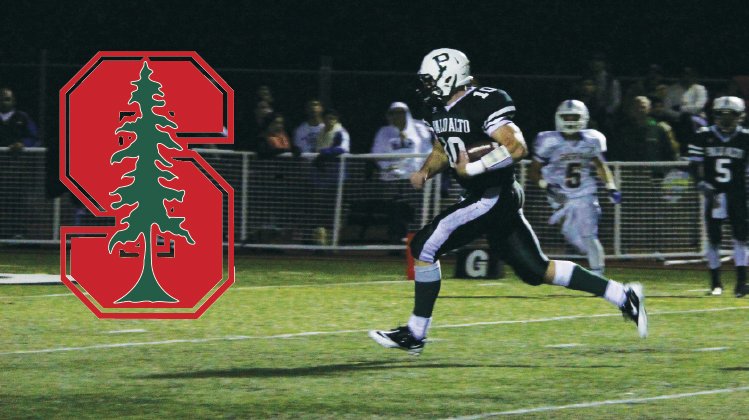 Viking quarterback Keller Chryst, who will graduate this spring, has committed to play football at Stanford University starting in the fall of 2014.

It is that dreaded time of the year again. The stress can be intense for seniors applying to college, taking the SATs or ACTs, and on top of that, maintaining good grades for the semester. But for a select group of seniors, stressing about which school to go to is not on their list of worries.

The process of recruitment began fairly early for Totte, during the summer between his sophomore and junior year.

“[Yale] saw me play in an Academy showcase which started their interest in me,” Totte said. “From there, they flew out and watched one of my games in California, and that really furthered their interest. I went on an unofficial visit during the second half of junior year, and a few weeks after that visit, I committed to Yale.”

Totte also says finding out about the recruitment was not much of a surprise.

“Because I had been communicating with the school for a long time, the commitment wasn’t a shock,”  Totte said. “Rather it was a really exciting moment.”

While Totte appreciates the relief of already being locked in a solid commitment so early on in the year, he continues to recognize the importance of academics.

“It definitely relieves the stress of applying to multiple colleges, as I only have one application to fill out,” Totte said. “As for school itself, I wouldn’t say it relieves stress there. Yale is great academically–I have to perform well in classes to make sure my acceptance will not be revoked.”

Similarly, Chryst’s early recruitment to Stanford allows him a little leeway to focus more on football and worry a little less about college applications.

“[Being committed] relieves some stress of senior apps, but I am still in rigorous courses that continue to challenge me,” Chryst said.

Chryst believes the recruitment process is long and definitely not easy, but well worth the final result.

“It is Stanford University; many kids dream about going to such an academic institution and adding on a great football team was hard to pass up,” Chryst said. “[The recruiting process] was pretty hectic. Coaches would always try to get you to call them or visit them. I wasn’t a big fan of the whole process.”

For Gee, a crucial member of Paly’s volleyball team, her interest in the University of the Pacific (UoP) sparked partly because of her mother’s attendance there as a student.

“My mom went to UoP and I made a visit when I was a sophomore, and ever since then it has been one of my top choices as a school,” Gee said.

In contrast to Totte, Chryst and Gee were not as certain about recruitment offers from their final universities of choice.

“I wasn’t really expecting to get an offer,” Gee said. “I didn’t even know if I could play D1 or not.”

“I definitely did not expect being offered by Stanford or any D1 school for that matter.”

In fact, the offer from UoP was a surprise for Gee.

“I was talking to a lot of other schools who were expressing more interest in me,” Gee said. “But when we came back from the Junior Olympics, UoP sent me an email saying they were very interested.”

Gee concurs with both Totte and Chryst on the level of stress being lowered after her commitment.

“[Getting recruited] makes first semester a lot more relaxed,” Gee said. “I have time to focus other things such as homework, volleyball and spirit week.”

Though the process for each athlete is different, all three look forward to attending their schools in the fall of next year.

“It makes me proud that I will be involved in the athletic life at Yale,” Totte said. “I am excited and honored to be a part of such a historic school and a great athletic program.”

What makes his commitment even more exciting is the fact that Totte believes there are an endless number of opportunities waiting at Yale.

“In addition to everything a kid is stoked for when going to college, I am especially looking forward to winning games on the pitch and learning as much as possible from such a great university,” Totte said.

Gee’s enthusiasm for her school is apparent as well. She looks forward to playing alongside familiar faces–a former teammate and a friend from her club team.

“I already know [Paly alum] Kimmy Whitson who also plays volleyball there and I am also going with one of my best friends from my club team, so it will be so fun to go with her,” Gee said. “Also [UoP’s] campus is a hidden beauty in my opinion.”

Likewise, Chryst’s outlook on his future at Stanford is of total optimism and excitement.

“It’s awesome knowing that I can one day in the near future make an impact on a nationally top rated football team,” Chryst said.