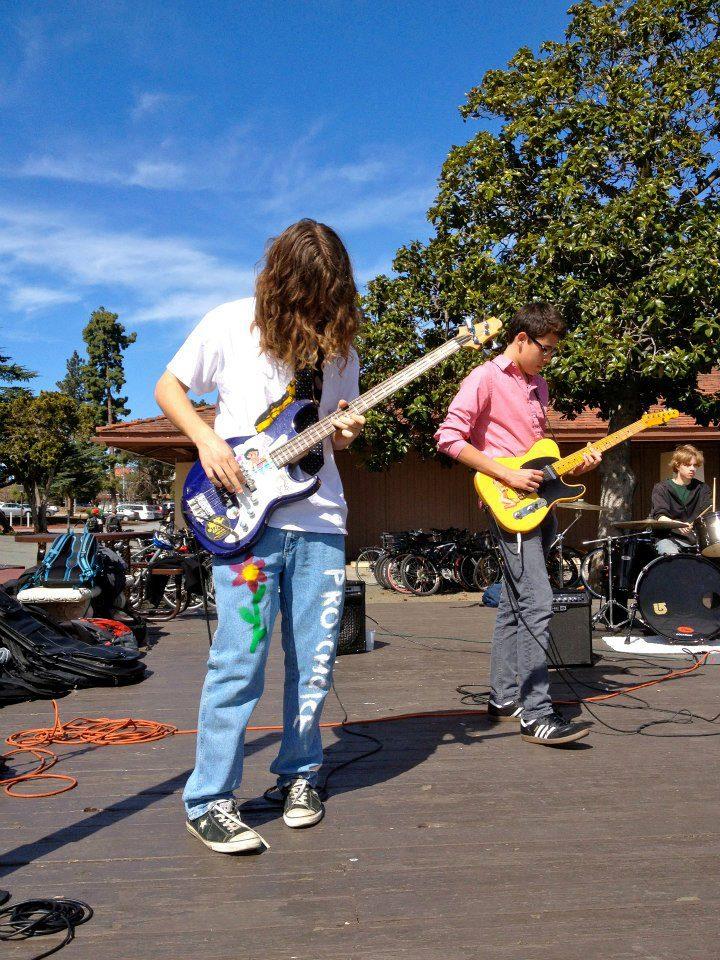 A dream does not become reality through magic. It takes sweat, determination and hard work, according to former Secretary of State Colin Powell, .

Palpitare, a band run primarily by Paly students, has taken this philosophy to heart. Instead of sitting around, waiting for an agency to find them, they plan on doing all they can to get themselves discovered starting with participating in the Battle of the Bands on Oct. 13 at The Metro in Oakland.

According to senior Shyon Lewis, a singer, bass player and keyboard player for Palpitare, the band has been practicing two or three times per week in order to prepare for the competition. The winner of the competition will recieve a headline show, studio time or cash.

“There are prizes, but really the main deal is we get to play a real venue,” Lewis said.

Palpitare will be competing against five other bands, each of which were founded at least two years before Palpitare. and have more experience as a result The competition will be fierce, but Palpitare feels that they can still win the competition.

“I think we have a decent chance, even though we are coming up against veteran bands with adults in them,” singer and guitarist Mostyn Griffith said. Palpitare began in 2012 when seniors Mostyn Griffith and Shyon Lewis, as well as Julien Morgan, a senior from Woodside Priory, met regularly to play Weezer covers for fun. Eventually they decided to add their friend, senior Jack Krasnow to the group as a second guitarist and form a band.

Griffith reported that the band initially started because of the common interest he and his bandmates shared.

“My friends and I were all musicians and we all liked similar music, so we decided it made sense [to form a band],” Griffith said.

Griffith got into music when he was young.

“It was really just a few simple bands like Weezer and Nirvana that started it,” Griffith said. “I guess I just really got interested in the actual instruments and people behind them.”

Lewis’s motivations for starting the band were similar to Griffith’s.

“I really love playing music and I want to make music with my best friends,” Lewis said. “I don’t really remember why I got into it [music] but I know I’m in it now because it’s just an extension of who I am. I can’t imagine not playing an instrument. That’s crazy to me.”

“It’s been around my whole life,” Krasnow said. “My parents took me to concerts when I was young and I’ve been playing instruments since kindergarten.”

The reason Morgan and his friends decided to create the band was that they already knew each other and shared a similar passion for the same kinds of music.

“We all were friends beforehand and all played instruments so why not?” Morgan said.

One of the main reasons the band wanted to compete in the battle of the bands was to get their music out to the public.

“It will give us a chance to show off how much we practiced,” Griffith said.  “It is also good progress for the band. I think we all hope to get a real album together before the year ends and just to play bigger shows.”

The competition is a good platform to increase the band’s exposure.

“It’s our first real venue,” Lewis said. “The really big thing for me is getting to play. I’m not so concerned with winning.”

The reasons Griffith wanted to compete in the Battle of the Bands was to gain experience and publicity.

“Just getting our music out there, as well as the experience of playing live in front of many people,” Griffith said. “Also, competition has always been a driving force for me to improve.”

The band is now eagerly anticipating the competition to showcase their hard work and passion for music.