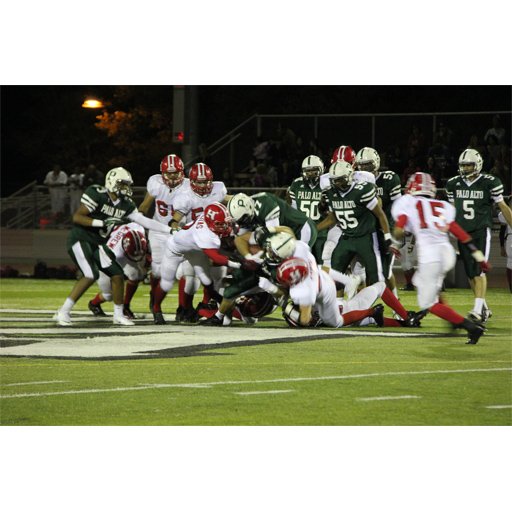 The Palo Alto High School boys’ football team won their first game of the season against the San Benito Haybalers by a score of 28 to 7.  The decisive victory was a thrilling start to the Vikings’ 2013 season, and gives both the players and fans high hopes for the team’s prospects this year.

In addition to the last Friday’s game against San Benito being the first game of the 2013 season, it was also the ceremonial opening of Paly’s new Viking Stadium, which has been in the process of being constructed for the past year.

A flag-bearing ceremony marked the stadium’s opening, and the head coach of the San Francisco 49ers, Jim Harbaugh, contributed to the ceremony by performing the pregame coin-flip. Harbaugh also watched the first half of the football game, an exciting occurence for the Palo Alto locals.

“Jim Harbaugh is a guy that I respect a lot and look up to and seeing him was really cool,” senior Jared Schwartz said.

The community’s gratitude for having a brand new, renovated stadium was clear from the sheer number of fans who attended the game.

“I thought the game went great and the fan support was amazing,” senior lineman Jack Anderson said.  “Coach [Earl] Hansen told me that it was the most fans that he has seen at a Paly game in 30 years.”

The Vikings dominated the entire game.  However, this win does not necessarily mean that the season will be especially easy to perform well in.

“We did a pretty solid job overall being our first game, but we definitely have a lot to clean up,” senior quarterback Keller Chryst said.

The team has a tough schedule but they expect to have a fantastic season, they are a team full  of talent.

“I feel like we have the potential to take this team as far as we want,” Chryst said.  “If we put in the work we can be something special.”

The Vikings’ win against San Benito is just the first step in the team’s 2013 season. The Paly Vikes hope to continue the momentum they gained from their first win in order to perform especially well the rest of the season.

“We have a big game against Archbishop Mitty this week, but I believe that if we can beat them this team could potentially go all the way to state,” Anderson said.

The team has a lot of talent this year, and with a lot of focus, they could potentially repeat the result of the 2010 season and win a California Division I State Championship.

“[A California State Championship] is our eventual goal and we have a bunch of guys who are driven to achieve [the goal],” Anderson said. “[This goal] should make for a fun season.”