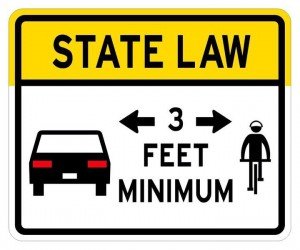 The California Bicycle Coalition’s “Give Me 3” campaign finally succeeded after Governor Jerry Brown signed the “Three Feet for Safety Act” on Sept. 23.

This bill is a result of an extreme push from not only bike safety groups, but bikers all over California. An overwhelming 4,600 Californians sent messages to Governor Brown asking him to sign the bill according to California Bicycle Coalition.

Operative on September 16, 2014, this law requires vehicles to give bikers a minimum of three feet of space when passing a bicyclist. Previously, it was illegal to overtake a car or bicycle without maintaining a “safe distance,” as to not interfere with the safe operation of the overtaken vehicle or bicycle.

This vaguity and the fact that Passing-from-behind collisions are the leading cause of bicyclist fatalities in California according to California Bicycle Coalition are the main reasons people cite when explaining why the new law is so important.

The “Three Feet for Safety Act” removes bicycles from this clause and creates a separate law with more specific rules for overtaking bikers. The law for overtaking another vehicle remains the same, the only language change being the elimination of bicycles.

Once operative, this law does not allow drivers to overpass a biker if they cannot maintain a three feet buffer zone between any part of the motor vehicle and any part of the bicycle or its operator. If a vehicle is unable to pass a bicycle while safely maintaining three feet of distance, the new law requires the vehicle to “slow to a speed that is reasonable and prudent, and may pass only when doing so would not endanger the safety of the operator of the bicycle.”

Additionally, the fine for any violation of this law will be anywhere from $35 to $220 if a collision occurs between the motor vehicle and a bicycle that causes bodily injury to the operator of the bicycle.

Student bike riders are excited about the new legislation, including senior Eli Weitzman.

“I think this new law will be extremely beneficial to bikers in the area, especially with the number of accidents I’ve heard of recently,” Weitzman said. “In the morning there are a lot of kids biking to school and any precautions taken against crashes are sure to make a difference.”