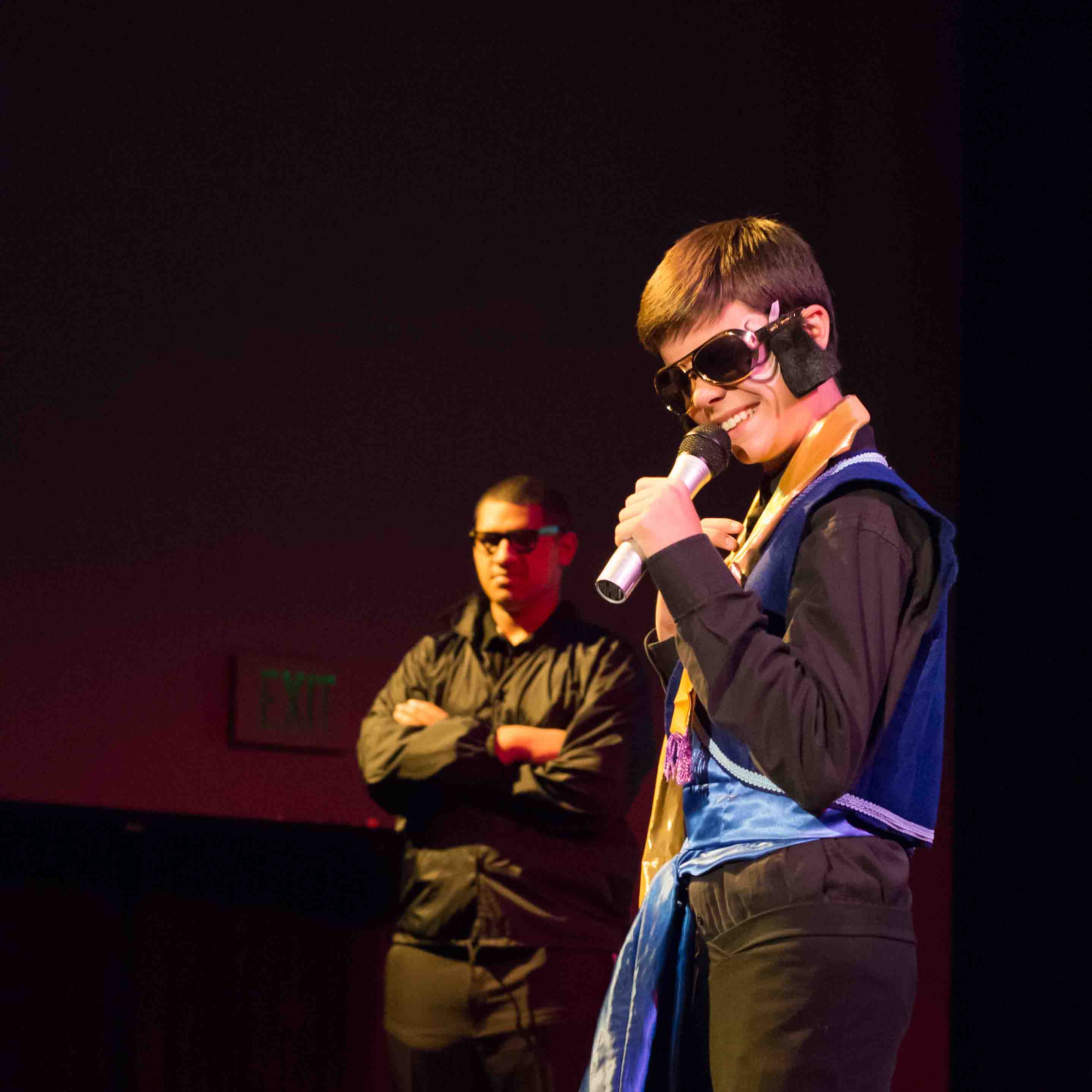 Freshman Johnny Rohrbach sings as he is protected by his bodyguard played by sophomore Carl Wolfgramm.

On Sept. 29 the Palo Alto High School theatre department debuted their first production of the year, a take on the classic middle eastern fairy tale, Aladdin. At just 45 minutes long, the play stars a mostly underclassmen cast and features a story stripped down to the minimum plot details. A non-musical performance, this play did not contain any of the Academy Award-winning songs scored by Alan Menken, which made this story a much-loved Disney classic.

Rather than rely on big musical scenes and extravagant sets, this production is centered on a simplified version of the classic tale, telling the story the evil magician Omar, played by sophomore Matt O’Reilly, and his quest to control a middle eastern kingdom. Caught up in his plot are a magical and comical genie, played by sophomore Adele Bloch, and the starcrossed lovers of Aladdin and Princess Ginger, portrayed by freshmen Peter Mouroulis and Molly Kraus, respectively.

By cutting the length of the play to under one hour, director Nancy Sauder made the show accessible to viewers of all ages, evidenced by the large number of families who attended, but still entertaining and humorous, with the performance being almost as much comedy as drama. The underclassmen cast members were expressive and eloquent, especially Maroulis and Bloch, and all of the actors did an admirable job making the basic show more intriguing, with special help from senior Matthew Craig as the bearded and imposing Sultan.

The show made little usage of set pieces or props, forcing the actors to convey their characters purely through expression. Although the sets were minimalist at best, the bright colors of the wardrobes and lighting helped ground the story and make it more visually appealing.

Appearances aside, the play did convey a strong moral despite its short run time and minimal production. With a message fit for its modern audience, this production shows that love should not be infringed upon by making arbitrary rules about marriage. In the story, Princess Ginger and Aladdin are prevented from marriage because of a law stating that a princess may only marry a prince. This fact prevents their union until the final scene of the play, when the Sultan states that he will change the law to allow anybody to marry whoever they choose.

This mirrors the recent striking down of the Defense of Marriage act by the U. S. Supreme Court, an important step in allowing federal recognition of same-sex marriage, especially in the state of California.