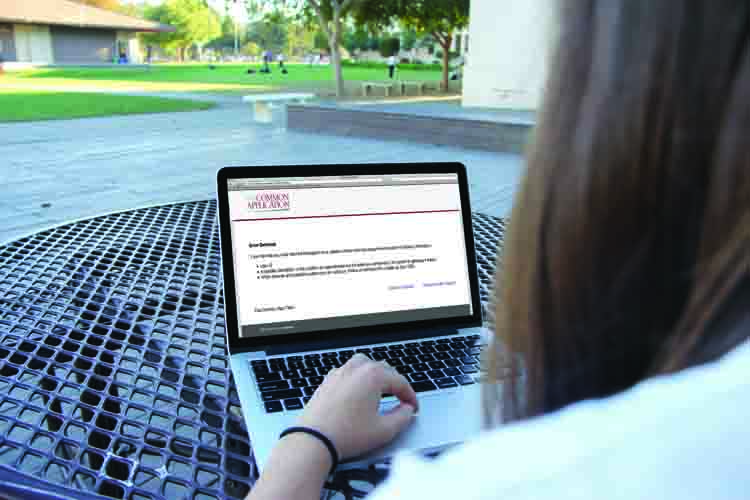 Students have been encountering issues while using the Common Application website when submitting applications to colleges.

The Common Application, an online program utilized by schools nationwide for college admissions, has recently encountered numerous technical difficulties, hindering the college admissions process for many seniors applying to universities this year.

Over this past month, complications with the Common App system have delayed submissions of college applications for the nationwide high school class of 2014. Such complications on the website have caused frustration throughout the nation.

When the website is busiest, many students reported complaints regarding failure to log into an existing account, trouble importing transcripts and letters of recommendation onto the site, jumbled document conversion formatting and glitches in the payment systems. In addition, due to the increasing number of colleges utilizing the Common App for college admissions, its server has been in high demand for students, resulting in periodic crashes that affects the users.

According to Scott Anderson, the Common Application’s director of policy, the Common App system has attracted an increasing number of students this year, and at the time of its yearly launch, many technical difficulties were spotted.

“Many, many students have been able to submit just fine,” Anderson said in an interview with the Washington Post. “But for those who can’t, it’s maddening. It’s frustrating. .  . We are apologetic and regretful that they find themselves in this position.”

As a result of these difficulties, many schools have pushed back deadlines for early action and early decision admissions. Universities such as Yale University, Northwestern University, University of Chicago, University of North Carolina at Chapel Hill and Boston University have all extended deadlines upwards of two weeks. Other schools, such as Princeton University, have alternative methods for submitting applications through programs.

Senior Travis Chen believes that colleges with extended deadlines have really helped students in a time of stress.

“I think [Common App’s problems] have added unnecessary stress to the [college admissions] process,” Chen said, “I agree with the colleges’ decisions to extended deadlines, because it allows students to submit what they actually want, instead of conforming to time pressures caused by [Common App’s] problems.”

The Common App has since fixed many of the glitches that has caused seniors across the country to lengthen their college application processes, but there remains occasional bugs and glitches that students still face. Luckily, many of the remaining errors in the system are either purely cosmetic, or they do not apply to the majority of applicants. Portions of students’ uploaded application documents are not inadvertently deleted, and credit cards are not charged multiple times for fees; however, document and website formatting remain jumbled for many users.

Regardless of whether colleges have changed their procedures for admissions this school year, or if the Common App continues to glitch for students, this has caused an overall delay and struggle to submit college applications in a timely manner.

As deadlines for early action and early decision pass, the Common App program hopes to rebound from its early inconveniences in time for regular decision applications.