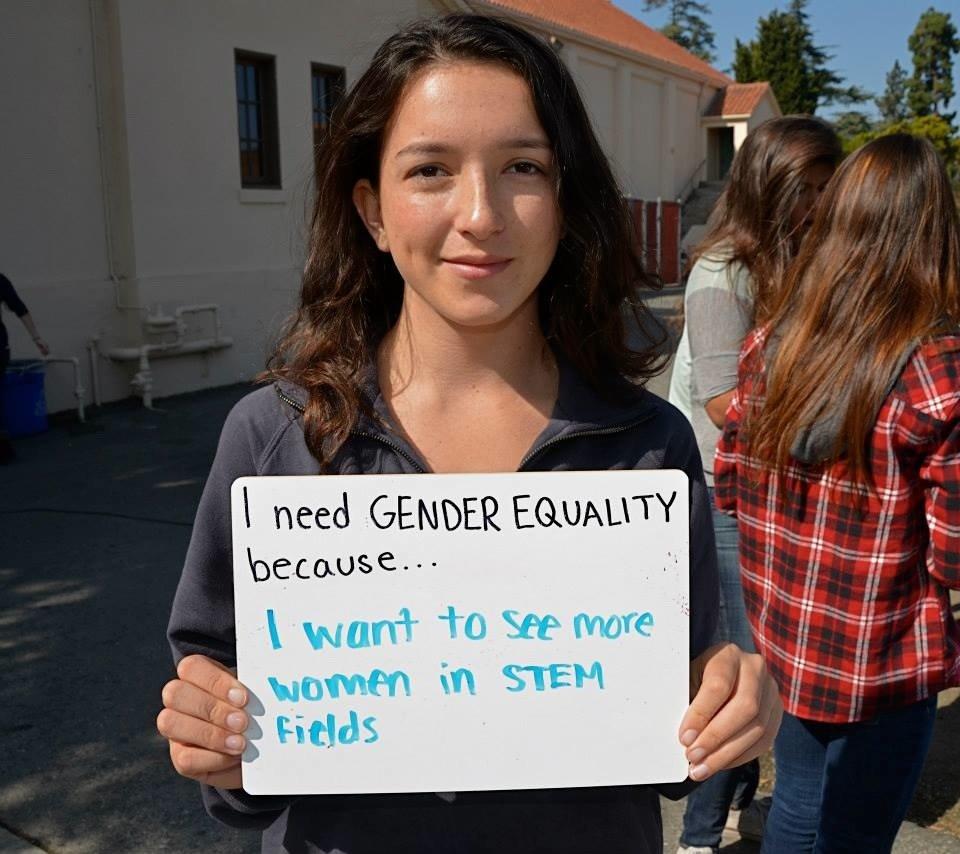 Daniela Ivey advocates for women involvement in STEM at an event hosted by the Gender Equality Club.

At Palo Alto High School, gender inequality is something that has often been scoffed at, or brushed off as a problem that is not prevelent in Palo Alto. However, a few students recognize the issues they and their peers face, and have taken the initiative to found groups to work towards gender equality inside and outside of Palo Alto.

With all the issues that women face internationally, it is pretty easy to focus on the negatives. However, several Palo Alto teenagers are helping to create positive solutions and turn around the negative trend that women have encountered around the world. Through school clubs and outside organizations, Paly students are making a difference and contributing to a movement that empowers women near and far.

Senior Lande Watson, one of the two presidents of the Gender Equality Club, has attended many women’s rights conferences and participated in multiple protests and other events for women’s empowerment in the recent past.

Watson and fellow senior Kelly Patterson founded the Gender Equality Club in spring 2013 last year, and since then the club has taken off, with active members from all different grade levels and interests. Their most recent event, “I need gender equality because…,” involved a booth by the senior deck on the Quad, where many Paly students wrote their motives for supporting gender equality on small white boards and were photographed by Watson.

“I’m really happy with how [the event] went because so many people participated,” Patterson said. “I hope we’ll get even more people [especially guys] to come out next time. You would think that since we live in such a liberal community that more people would be advocates for gender equality and so I’m hoping our events will get more students involved.”

The club is currently in the planning stages for a upcoming display on the library chalkboards, which they hope will involve several drawings. They also plan to create QR codes that link students to women’s empowerment articles and videos and pictures from their previous event.

Senior Daniela Ivey is also interested in empowering young women, but she has taken a slightly different approach. Ivey, who is interested in STEM (Science, Technology, Engineering and Math), began volunteering at Ronald McNair Middle School in East Palo Alto last year. She was shocked to find that, while many boys were involved in academic clubs and science experimentation, there were few girls doing anything similar.

“They were literally surrounded by glitter,” Ivey said of the girls’ after- school program. “I started talking to some of the girls. I asked them about the after-school programs and what was offered. There was one girl who liked after-school sports, but none of the boys wanted her on their team. Another didn’t even know that Girl Scouts existed.”

Ivey’s mission wanted to get the girls at the school more involved in science experiments and other lessons, and immediately went to ask school officials’ permission to begin.

“I told [the after-school coordinator] that I wanted to make an afterschool program,” Ivey said. “I told him that I didn’t care if it was just me. I wanted to give the girls an after school program other than playing with glitter pens.”

Though Ivey was anxious for her first visit at the school, she planned a physics activity for the girls.

“I had no idea what I was doing,” Ivey said. “I started asking friends to go with me. The first time I went was with two other people. I brought a whole bucket of eggs.”

Ivey’s first experiment, involving a simple but engaging egg drop experiment, attracted only two girls, who had arrived at her door by accident. They stayed, saying they had nothing better to do, and the competition went on with two participants. Nonetheless, the experiment was a huge success.

Ivey was unsure if any students would even show up for the next meeting, so she showed up alone. At her next meeting, around ten girls showed up, and this time they had all come on purpose.

“They all rushed towards me and were like ‘We hear you were letting girls join your club,’” Ivey said. “They stayed. Some girls came and went. They would leave if they weren’t into it, which made me a bit happier. It wasn’t like they were obligated to stay with me. They chose to be there.”

Ivey’s main opposition for her program was from the parents of her students, many of whom were already working or taking care of their younger siblings.

Some parents were under the impression that their children were obligated to attend, and Ivey told them that they should “wait and see.”

“I wasn’t going to put myself in the position to promise them anything,” Ivey said.” It’s not going to reap benefits right away. Some of the girls are doing better in school because they saw that learning could be fun. I could bring these girls so much joy with [even] five dollars [for materials],” Ivey said with satisfaction.

Ivey is currently wrestling with continuing her project after she leaves for college next year. She recognizes that high school students cannot be expected to maintain it, as it is a non-profit, so she went to the teachers for help. The program is currently in its trial run for a few months to see how it can function without her, with teachers working after school voluntarily, with little to no compensation.

These students are just a few of many starting unique organizations and taking the initiative to impact women’s empowerment. Other students blog for several organizations, or simply participate in club activities or outside organizations. Paly students are creating positive change in narrowing the gender gap and empowering women in a variety of ways.