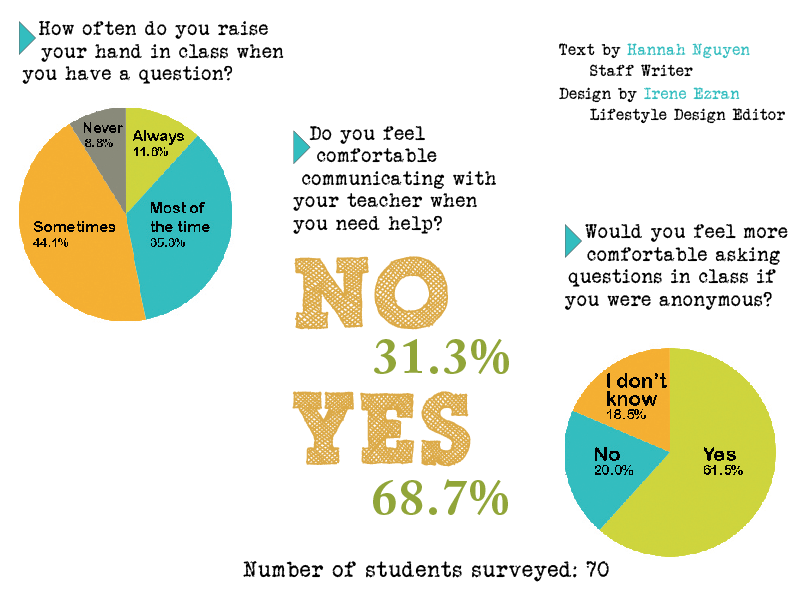 While walking around campus, it is easy to pick up  giggle-heavy conversations between sophomores that are heavily composed of phrases such as “LOL how do I do chem” or between seniors inquiring, “guys, what’s calculus?”  These expressions, while fun to laugh about, stem from a pressing problem that is growing in the modern classroom — the silent majority.

The term “silent majority” describes a situation in which a majority of a population shares an idea that is not expressed or voiced publicly. In the past, silent majorities have often been associated with political affiliation. But lately, the silent majority has taken on a new environment closer to the average high school student’s heart: the classroom.

In the classroom, the silent majority refers to the group of students who elect not to raise their hands when the teacher calls out, “any questions?” The reaction to this question often parallels, as many students will testify, the infamous scene from Ferris Bueller’s Day Off. Anyone? Anyone?

According to a study published by the University of Utah, students refrain from asking questions for several reasons: fear of embarrassment, fear of wasting class time and intimidation.

Denis Dubay, an Earth and environment teacher in Raleigh, N.C., claims that “no student wants to appear stupid, and fear of revealing that they don’t know or understand something can silence students in front of both peers and teachers.”

One issue of the silent majority is the manner that questions are typically asked in a classroom. The traditional method of raising hands demonstrates an open, public gesture of confusion or uncertainty. This feeling of exposure and vulnerability contributes to why students hesitate to ask questions. At Palo Alto High School, 88 percent of students claim that they do not always raise their hands in class when they do in fact have a question, and three in five Paly students claim that they would feel more comfortable asking questions if they were to do so anonymously according to an online survey.

Other students suggest using a system akin to an “ask.fm” for teachers: an online interface where students could pose anonymous questions for their teacher to answer. Students currently use ask.fm to ask each other personal questions, but this model can easily be spun into an educational tool. One anonymous student, Jesse, however, feels that the use of these online sites will diminish the personal connections established within a classroom.

“I think we are too technology-based to begin with,” Jesse said. “Starting to depend on [technology] in classes to ask questions will make us more socially uncomfortable.”

Another anonymous student, Taylor, claims that even though asking questions with an unknown identity is preferable in some situations, it is not always the best solution.

“Asking questions in class is efficient and convenient,” Taylor said. “With some teachers, I would feel more at ease if questions were anonymous, however that varies on a teacher-by-teacher basis.”

Other solutions have been presented by the education community to eliminate the learning complication of the silent majority. In an article published by edudemic.com, language teacher Colleen Lee advocates for the “pair-and-share” method in the classroom.

“[Students] will always get to practice or test out [their] response with [their] partner first,” Lee said. “[They] will have time to try.”

Three in five Paly students agree that group discussions would create a more comfortable environment for them to ask questions.

The problem with students not raising their hands in class is not confined to America. Education expert Professor Dylan Williams conducted a study called “The Classroom Experiment,” which was published on the British Broadcasting Corporation website in April 2012. One of his trials included a “no hands-up” policy. By eliminating this method, he found the results were boosted confidence amongst students and higher test scores.

“I want a classroom culture where it’s OK not to know the answer,” Williams said to British newspaper The Independent.

Williams is a strong advocate for the whiteboard method used in some classrooms.

“I think mini-whiteboards are the greatest development in education since the slate,” Williams said. “You can get an overall view of what the whole class [thinks].”

Many alternatives to the traditional method of raising hands, such as anonymity and group collaboration, have been proposed by educators in the effort to make the classroom a welcoming, understandable environment. The silent majority is a large group of individuals that has formed as a result as these nerve-wracking pressures — a group suppressed by the intimidation factor of a statement of public confusion.