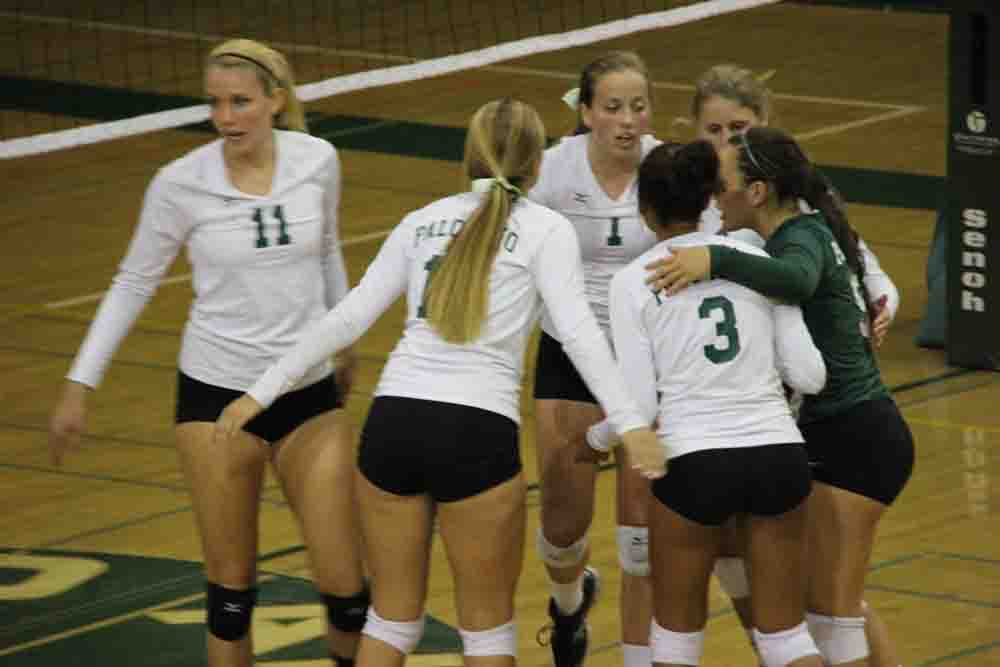 The volleyball team huddles to support each other during a recent match.

With a league record of 8-3, the girls’ volleyball team is on a roll. The Lady Vikes beat Henry M. Gunn High School on Oct. 15 at home in four sets. They also defeated St. Ignatius College Preparatory 3-1 at home on Oct. 22, along with Mountain View in three sets at home on Oct. 24. The team won their match against Monta Vista High School in three games in one set on Oct. 29.

After winning four league matches in a row, the team was enthusiastic and hopeful about winning the last few matches of their regular season.

Freshman Katie Passarello, who had three aces against Monta Vista High School, was pleased with her team’s latest win of the Lady Vikes’ four-match hot streak.

“[Playing Monta Vista] was a fun game, and a lot of us got to be involved,” Passarello said. “We played really strongly, and it was nice to get out of there in three [sets]. The season has been going great. We’re playing really well, and hopefully we’ll be able to keep it up.”

However, the Lady Vikes fell to Los Altos High School on Oct. 31, the team’s last home match of the regular season. The Los Altos Eagles were in control during the first set of the match, defeating the Vikings 25-18. The Vikings struggled in an intense second set, eventually falling to the Eagles 21-25. Despite a great effort from the team in the third round, led by senior Becca Raffel, who had several aces and kills, the Eagles again prevailed, winning the set 25-21. The game was also the last volleyball game to ever be played in Paly’s historic Big Gym.

The team destroyed cross-town rivals Henry M. Gunn High School in straight sets on Tuesday, Nov. 5 at Gunn. Senior Lauren Kerr was selected Player of the Match. She tied junior Jade Schoenberger for the most kills, with 10. Kerr also had some key stuff blocks and control blocks.

Despite their loss to Los Altos High School, the team feels strongly about their upcoming league matches.

After the league season ends on Nov. 7, the Lady Vikes will look to move onto the CCS playoffs, which begin Wednesday, Nov. 13.