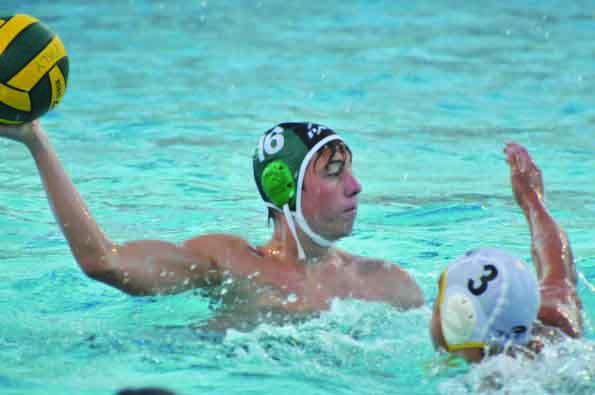 Sophomore Winston Rosati, as well as other underclassmen, give the boys’ water polo team hope for a strong future heading into next season.

The Palo Alto High School boy’s 2013 water polo season came to an end with a 13-5 loss to Bellarmine College Preparatory in the semifinals of the Division I Central Coast Section (CCS) playoffs on Nov. 19.

Although they did not reach their ultimate goal of competing in the championship game, the team believes that they have accomplished a lot and proved themselves as worthy competitors.

“We made great progress as a team this year,” senior captain Ethan Look said. “Coming into the season, nobody really thought anything of us.”

Many of the team’s critics thought that the loss of half a dozen seniors from the 2012 season was too much for the team to overcome. The boys’ team ended up finishing with the top regular season record in CCS.

“Losing six of seven starters, who expected our team to end the season with the best record in CCS?” Look said. “From day one we came in with a tough mentality, we practiced hard, battled through losses and played better than anyone could’ve expected — [all] in our head coach’s second season. I couldn’t be happier with how this year turned out.”

The team won their first two games of the CCS tournament against Pioneer High School and rival Henry M. Gunn High School, but eventually fell to Bellarmine College Preparatory. Bellarmine went on to lose in the championship game to Sacred Heart Preparatory.

Although they fell short of their goal this year, captain Ethan Look believes that the core of returning players next year can compete for a CCS title.

“As for next year, they are going to be good,”  Look said. “There are great leaders on that team in guys like [junior] Lukas Novak, [sophomore] Winston Rosati and [freshman] Andrew Jozefov, among many other extremely talented guys.”

In addition to the returning players from the varsity team, Look believes that the upcoming players will help the team stay tough.

“Great, physical [junior varsity] guys are coming up, and the rest of the varsity squad I know will step up to any challenge,” Look said. “Losing 11 seniors won’t matter [and] I don’t expect those guys to miss a beat. They are going to be a fast, tough team that everyone should keep an eye on.”