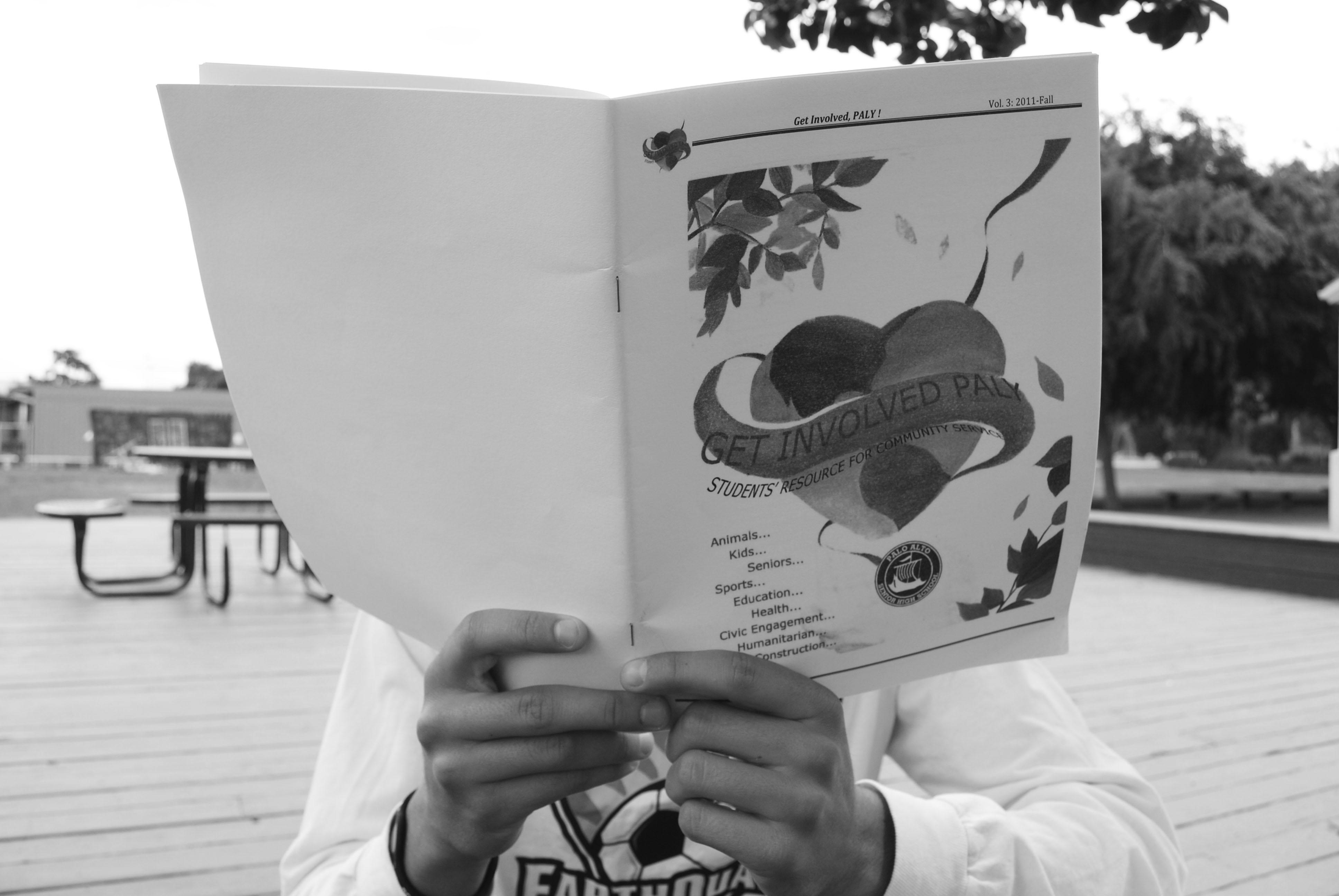 A student researches volunteering opportunities available in the Paly community.

Here at Palo Alto High School, most students pack their afternoons with a plethora of extracurricular activities. With sports, clubs, music, theater and other organized activities taking precedence above all else in the world of after-school activities, community service often is omitted from a student’s list of commitments. It is uncommon to hear of a student volunteer who dedicates his or herself to weekly service causes.

Many students only volunteer a handful of times every year, usually just in order to fill Living Skills’ course requirements. Service is not considered a consistent activity or extracurricular, but seen rather as a single two-week trip to a tropical island or 100 hours gathered in the span of a couple months for the sole purpose of securing the President’s Volunteer Service Award.

Let us step back and think about the significance and effects of volunteer service on the community.

Examples of well-known volunteer opportunities include working with the homeless, elderly, mentally disabled and underprivileged. The goals of many organizations are to minimize achievement gaps, end vicious cycles of poverty and help people off the streets. The problems that charities face are very real. These are the flaws in society that we talk about in class and at home.

Despite the education of social issues, volunteering and helping others on a normal basis is rarely ever strongly encouraged. Service is promoted as a one-time or “do it until you get the hours” type of activity. It is considered unimportant in the scheme of everyday life because as high school students, we are often encouraged to act in college-savvy ways and dedicate all of our energy on school and practiced talents.

A topic of conversation that is rarely confronted, perhaps due to tradition, is the huge discrepancies in expectation among afterschool activities. For example, student-athletes are willing to and have been conditioned to dedicate hours a day to practice their sport. The ultimate goal of this dedication and hard work is to build character, team chemistry and take steps toward some sort of ultimate, almost sacred, athletic championship. These goals are undoubtedly very important.

However, this same passionate drive is for some reason not applied to serving the community. This is bizarre given the fact that these charitable issues are so huge and influential. Teenagers in our city and across America are taught that they must be fully dedicated to a football team or a choir group, but it is never suggested that perhaps dedicating that same amount of energy and effort into a humanitarian cause that enhances and improves a community or another individual’s life would be just as rewarding and life-changing.

Although it is important to emphasize athletic programs and artistic hobbies, it is time to shine the light on volunteering as a viable and legitimate extracurricular — a do-it-once-a-week-or-more type of afterschool activity that students can be passionate about, and personally obligated to. This does not mean undermining the emphasis on traditional extracurriculars; it simply means opening our minds and teaching teenagers and younger children that putting on an apron and making dinner for and conversing with the local homeless at a daily soup kitchen is just as meaningful and legitimate as throwing on a jersey for soccer practice every afternoon.

Volunteering not only benefits the community as a whole, but also the individual students.

In an ideal world, masses of high school students would flock to serve the community out of the simple goodness of their hearts. There would be no need for conversation on how volunteering could benefit the student. But because this is a proposal on establishing community service as a legitimate extracurricular and because legitimate extracurriculars almost always garner some sort of personal-gain, consistent and dedicated volunteer work benefits students and helps college applications.

Being a great football player or winning a robotics award is clearly beneficial to students who partake in such activities. These accomplishments are traditionally established examples of extracurricular success. Although measurements of “success” or accomplishment are not as clear-cut in regards to volunteering, they are certainly present.

Students who truly commit to service and volunteer multiple times a week gain insight on teamwork, dedication, responsibility to others and character. The lesson won’t be a “I need to memorize these lines so this musical runs smoothly” sort of responsibility, but perhaps a “I need to help with the afterschool program each day because I care about the academic success of 6-year-old Jessica” kind of responsibility.

Nick Xu, a current Stanford University student, volunteered frequently with the St. Vincent de Paul charity during his high school years in Sydney, Australia. He reflects on his experiences and the lessons gained from his service work.

“Every fortnight I would be involved with the making and delivering of sandwiches to the homeless population of Sydney,” Xu said. “Over many months of doing this, I realized that it was never about the food or snacks. Creating conversation was the most important part of the service.”

In addition to the lessons on the meaningfulness of developing relationships with those he served, Xu states that his community work taught him habits of consistency and upholding himself to a higher standard, not just when he was volunteering.

All of these important skills can be developed through community service activities, just as they can be through other after-school activities. The character-building that comes with participation in sports or theater can also be found through serving the community.

On the topic of more tangible examples of student benefits through volunteering, there seems to be two schools of thought regarding community service and college admissions. Some seem to believe that flying to a third-world country and sacrificing a week to build houses will greatly benefit them in entering a prestigious university. This is not so, as colleges are now aware of such short-term, costly programs and the ease with which a well-to-do family can secure such an experience for their children.

On the other end of the spectrum are those who do not consider volunteering an impressive or interesting activity to pursue consistently. They believe that sports and organized team activities are often considered to be more sought after and appealing to schools.

Irena Smith, a Palo Alto college counselor who worked for four years as a Stanford admissions officer, dispels the misconception that volunteering is an inferior addition to a student’s high school resume.

“In college admissions, there’s no hierarchy of good, mediocre or bad extracurriculars; colleges are far more interested in the quality of a student’s commitment to an activity than in what an activity is called,” Smith said. “It’s perfectly possible to be an indifferent or mediocre debater or a poor sport on the soccer field. It is also perfectly possible to be a valued and valuable presence in a senior community, an after-school program or a youth sports league.”

Smith further notes that not only does a consistent volunteer service indicate serious commitment, but it also shows good character on the student’s part.

“On a professional level, volunteering shows colleges that the student possesses what a former admissions dean at Stanford called ‘generosity of spirit’ — a sense that they’re connected to a larger community, that they are committed to causes other than their own self-improvement,” Smith said.

However, Smith makes a point to emphasize that superficial volunteer initiatives and short-term responsibilities can often be sniffed out by college officers. In order to benefit from service opportunities, there must be a clear sense of passion and willingness to dedicate, rather than “will this get me into college?” type of attitude.

“Students should be involved like they mean it,” Smith said. “Showing up once a year to serve Thanksgiving dinner in a soup kitchen is a nice gesture, but not more than that. In order to establish a true presence and genuine relationships within the activity, students need to treat volunteering with the same intensity of purpose with which they might treat being on a sports team, participating in debate or performing in theater. Like anything else, volunteering takes practice. Having a conversation with a senior citizen with dementia or explaining math to a middle school student hazy on basic math facts are not easy tasks.”

As citizens of a city that constantly preaches the importance of reaching out and helping to improve the greater community, it is time we begin practicing the actions necessary for reaching these goals. In order to act as productive citizens in bettering Palo Alto and our surrounding neighbors, we must ponder the ways in which we can dedicate more energy, passion and time into solving the problems that are very real in today’s world.

Perhaps we can begin thinking about encouraging volunteerism, a cause created to improve lives and communities, as an activity that students can and should participate in on a consistent basis. Perhaps we should contemplate the idea that feeding the hungry, teaching the uneducated and working with the mentally disabled is just as important as practicing a dance routine or scoring a touchdown.

Lastly, as we introduce extracurricular activities and personal hobbies to teenagers and  younger children, we should place community service on the map. As an activity that demonstrates to college admission officers that students takes the wellness of their community just as seriously as the leading roles they’ve secured in school plays or the medals they’ve won in Science Olympiad. Furthermore, volunteer experiences will gift young people the opportunity to develop character, find their passions and actually act in ways that directly benefit people besides themselves.