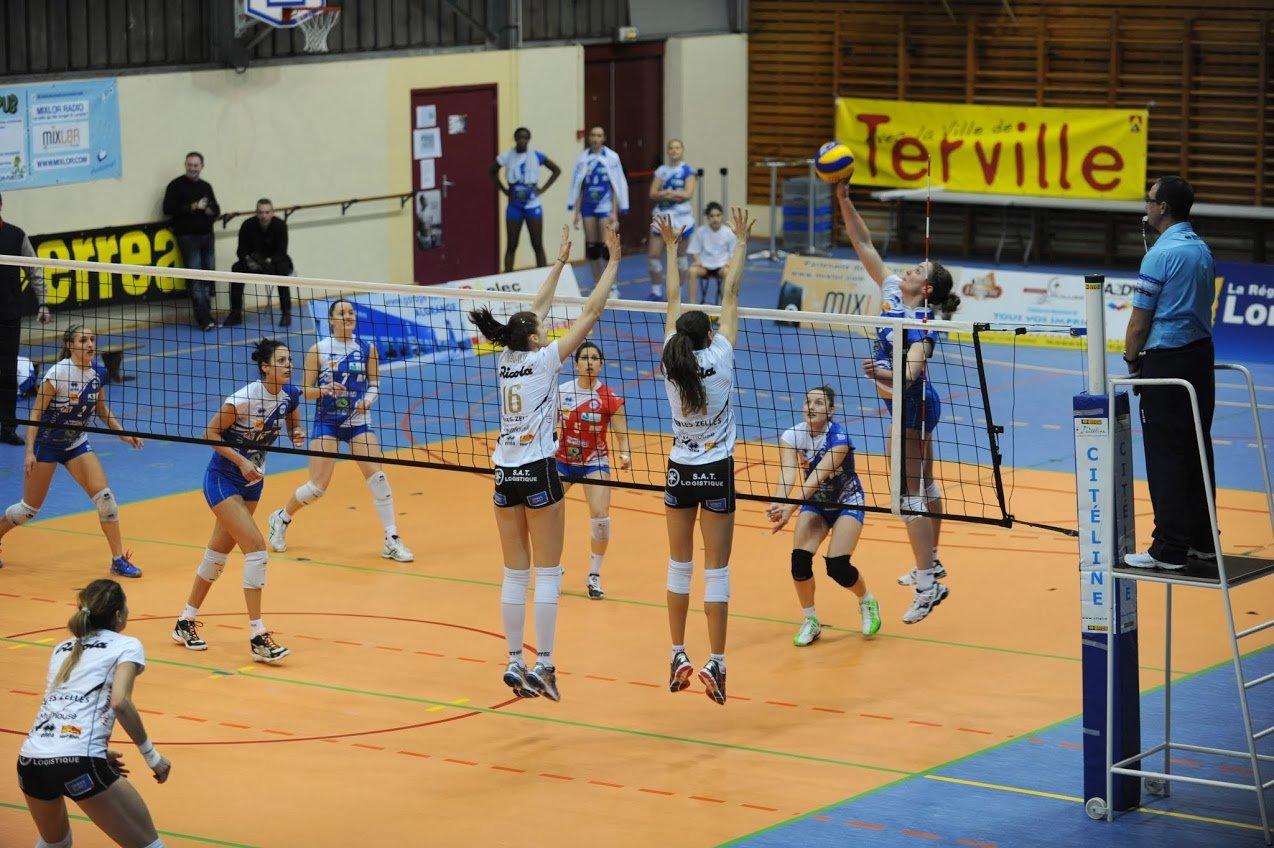 Allison Whitson (far right) spikes during a match while playing for the Terville Florange Olympique Club.

Most athletes coming out of Palo Alto High School have found ways to stay active in college, whether it be competing on club teams or participating in intramurals. Elite athletes continue their love for the game by committing to play on the varsity Division I, Division II and Division III teams for their respective colleges.

Allison Whitson, a Paly alumna (‘09) and former outside hitter on the Division I UC Davis volleyball team, took this path and thrived at the college level, finishing second in kills (1620) and total attacks (4489) in Aggie history. She was the first Aggie in Big West Conference history to earn first-team all-conference honors three years in a row.

Her performance at Davis did not go unnoticed, as Whitson attracted the attention of an agent working for Bring It Promotions, a company which helps match qualified and interested athletes with professional teams around the world.

“[I] told my agent I wanted to play somewhere in western Europe, like France, so from there I was contacted by a team in France,” Whitson said.

Whitson was offered a spot on the Terville Florange Olympique Club, the 12-team French pro volleyball league, the Ligue Nationale de Volley. She left home in August 2013 and began playing in September.

“I really wanted to take time off after college to travel and explore before finding a job at home,” Whitson said. “My college coach told me I was good enough to play overseas, so I figured it would be a great way for me to travel and have a great experience doing something while playing volleyball at the same time.”

With the club, Whitson practices five times a week, plays games on Saturdays and travels on Sunday.

“We have games every Saturday, so my week is pretty much all in preparation for that Saturday night.” Whitson said.

The team draws fans from the surrounding area and has outreach programs at the local schools to increase interest in the sport in France.

“We don’t get a ton of spectators, but we have some dedicated fans who come to every home match,” Whitson said. “It’s mostly just locals and sponsors of our club.”

Whitson’s sister, Kimmy, is a sophomore volleyball player at the University of Pacific and has had the chance to visit her sister in Europe and witness its volleyball culture firsthand

“The top leagues in Europe have a lot of attention,” Kimmy said. “It varies between countries but volleyball is really popular in Europe. It really depends on the club, some teams have a lot of fans, other have less. But there definitely is a good following.”

Her team profits from ticket sales as well as sponsorships from various businesses.

“One of our sponsors is a place called Thermopolis, which has warm water pools, saunas and hot tubs, so some of us go there on Monday nights,” Whitson said.

Debbie Whitson, a Paly economics teacher and Allison’s mother, says that her daughter is looking forward to possibly playing another season in Europe next year. Her daughter earns enough from playing on the team to support herself in France, but will return home once the season ends in April.

“Allison plans to come home for the summer, but is currently looking to go back for another year,” Debbie said.

“I want to play for one, maybe two more years, but ultimately I want to move back to the Bay Area, get a job closer to home, start a career in business and maybe coach volleyball on the side since I definitely want to keep volleyball as part of my life.” Whitson said

The opportunity to play on an international team has provided Whitson with unique life experiences. Not only is she living in a foreign country, but her teammates are multilingual and come from around the globe.

“The Terville team is very international… [there is one] American, one Norwegian, one Greek, one from Trinidad, one Canadian, two Estonians, one Serbian and two French.” Debbie said.

“My closest friends on the team are my roommate, Ingvild, from Norway, Darlene, from Trinidad, and Janie, from Canada,”  Whitson said. “I really enjoy everyone on the team, but the four of us all live in the same building and have similar cultural values.”

“This has already been one of the greatest experiences I have ever had,” Whitson said. “I get to meet people from all over the place since my team is made up of girls from eight different countries.  It’s cool to experience different cultures, try different food [and] learn another language.”

Whitson serves as an inspiration for current athletes who are looking to make it to the next level, including her sister.

“I definitely am keeping [playing professionally] as an option for when I graduate,” Kimmy said. “It would be difficult to turn down an opportunity to play at a professional level while getting the chance to travel at the same time, if given the chance.”