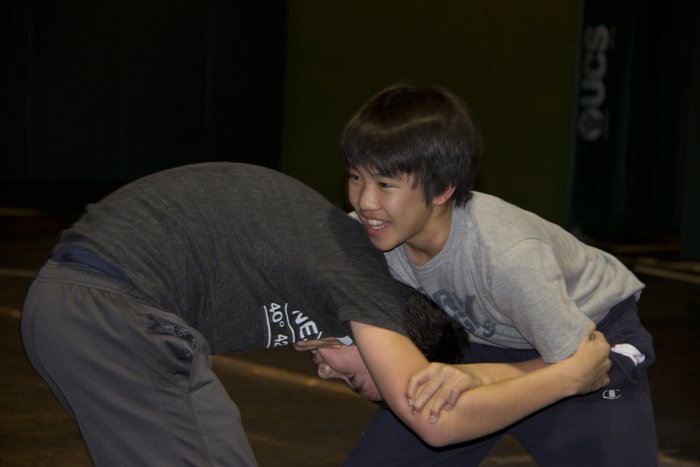 Underclassmen wrestlers engage in a practice match to improve and compensate for the loss of the injured seniors.

Mid-season, the Palo Alto High School wrestling team looks to finish the season stronger than its first half.

The team has lost the majority of their matches and still has room to improve as the season continues.

The wrestling team consists of almost entirely underclassmen, with the only exception being junior James Giaccia.

Behind Giaccia, the team was able to compete in the Apple Cider Tournament. Giaccia and freshman Seth Goyal both took fourth in their respective weight classes.

“We had a lot of young guys who probably won’t be wrestling varsity, but that’s all we had today,” head coach David Duran said.

The team, consisting of mostly underclassmen, will try to continue developing young talent for the coming weeks and competitions.

It is important that the younger wrestlers develop quickly and efficiently.

Multiple upperclassmen have potential season-ending injuries, and the team is likely to not have a single senior competing this year.

One senior, Gunnar Felt, will miss the season because of a knee injury sustained from football.

“Even before I got hurt we only had one other senior wrestler,” Felt said. “Plus, he just got injured as well and may not be able to wrestle.”

The team has four more weeks of scheduled competitions, with Central Coast Sectionals (CCS) following shortly afterwards if they qualify.