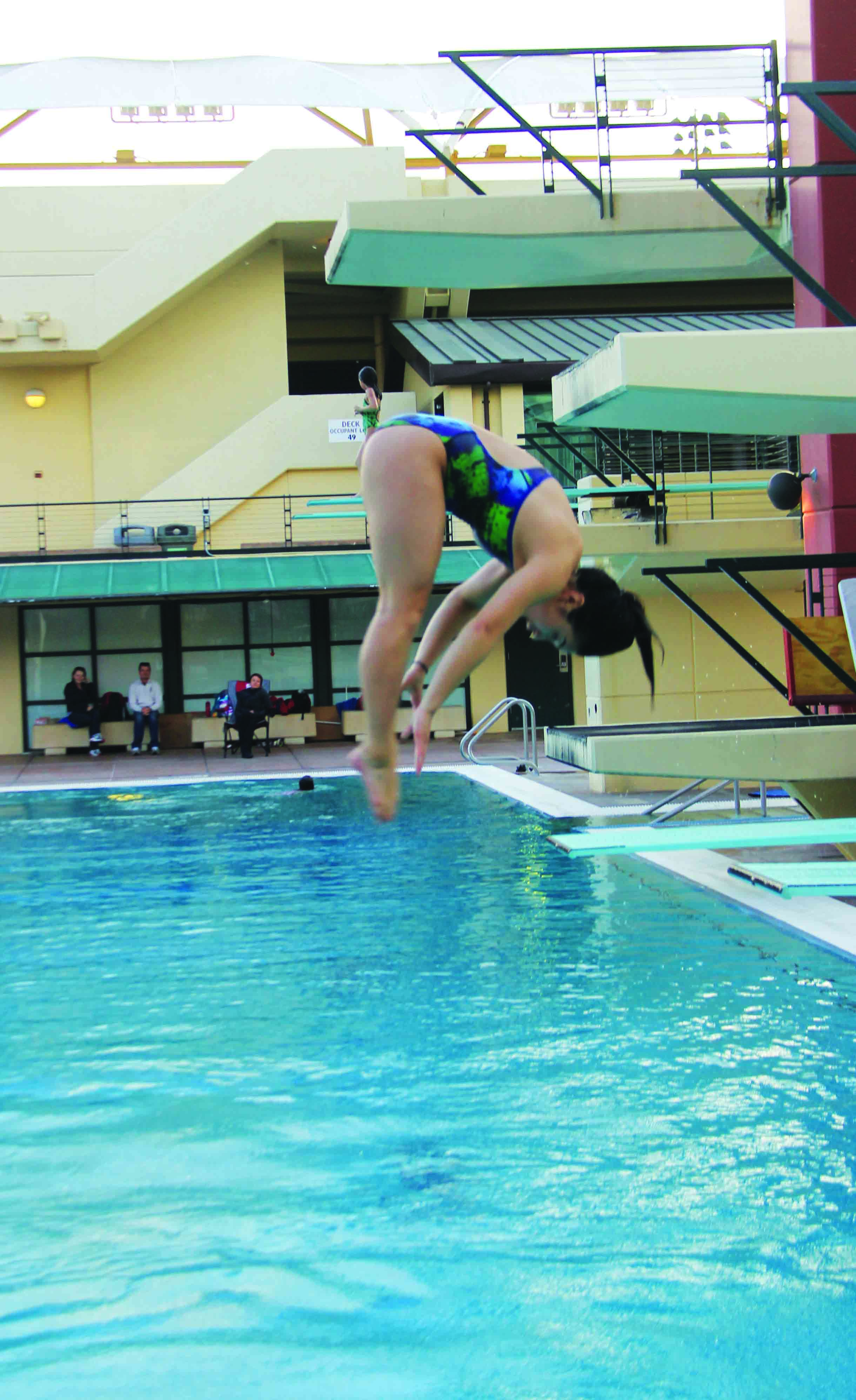 Sophomores Reed Merritt and Mimi Lin were introduced to diving in very different fashions, but both have risen to the top of Palo Alto High School’s diving team.

“It definitely felt great to win gold at leagues last year, but missing the record by less than a point really annoyed me,” Merritt said. “Now I have something to strive for and I hope to shatter that record this year.”

Lin began diving at the age of 12 after quitting gymnastics because of the sport’s extensive time commitment. Many times, gymnastics took more that 12 hours a week.

“After quitting gymnastics I was looking for a new sport,” Lin said. “The doctor recommended swimming because my body was damaged from gym[nastics].”

Much like Lin, Merritt started diving in eighth grade, also having left the sport of gymnastics, after However, he was not the one who chose to begin diving.

“My mom enrolled me in a dive class after I finished gymnastics to get me back into a sport and I really liked it so I stayed with it,” Merritt said.

After starting the sport of diving, Lin soon realized that the sport melded very well with her gymnastics background, as seeing familiar flips and spins brought Lin back home to the days of tumbling in the gym. The freedom she lost on the ground could now be found over the water.

“I saw people doing flips over the water and as an ex-gymnast I was like ‘Yay flips!’ so I talked to the coaches and got started,” Lin said.

Palo Alto High School head swimming and diving coach Danny Dye has shown high regard for the abilities of Lin and Merritt.

“I knew [Merritt’s] talent level when he came in,” Dye said in an interview with Palo Alto Weekly. “He’s got natural talent. [Lin] is so strong and athletic. They’re great athletes and they’re only going to get better. It’s great to build a program on [divers like them.]”

Lin hopes to be an inspiration to the team and a good representation of the sport to everyone. While high school diving may not be considered a time-consuming sport;  club diving outside of school takes a lot of training, and requires precision and skill.

Much like other sports, diving is about discipline and dedication. Although daily practices may seem excessive to some, it has become normal to Lin and Merritt. For Merritt, the best way to improve is through repetition because “the more you do a certain dive the better you get at it,” Merritt said.

Diving has taken Merritt and Lin all around the world. Every year both of them attend many diving meets around the nation with the Stanford Diving Club. At these events, Lin was able to create many memories with her team, as well as with other divers. Being able to interact with divers from different states has given Lin many new perspectives on life.

“I really liked nationals in Knoxville, Tenn., a few years ago because the pool was awesome and I did really well,” Lin said. “I had a good time there and made many memories.”

Although diving meets give Lin a chance to show others her talent, it is not the reason she loves diving and has stayed with it for four years.

“The best times are when we had a fun day at Stanford and got to do whatever and do crazy stunts off the tower and springboards or when I spend time with my diving peeps,” Lin, who also competes for the Stanford Diving Club, said.

Both Merritt and Lin hope to dive in college. One of the biggest reasons Lin continues to dive, despite the large time commitment, is for a college scholarship. Many athletes are able to get substantial scholarships at colleges if they are willing to continue to do their sport.

“Cole Plambeck (‘13) got a full ride scholarship to Duke [University] because of diving,” Lin said. “If diving in college means getting tuition funds, then I’ll do it.”

“I hope to dive in college, as any athlete who enjoys their sport immensely would want to,” Merritt said.

Merritt’s ultimate goal is to participate in the Olympics.

“I would want go to the Olympics, but I still have a long way to go,” Merritt said.

In the meantime, however, both are currently striving for gold as the Paly dive team begins its 2014 meet season.