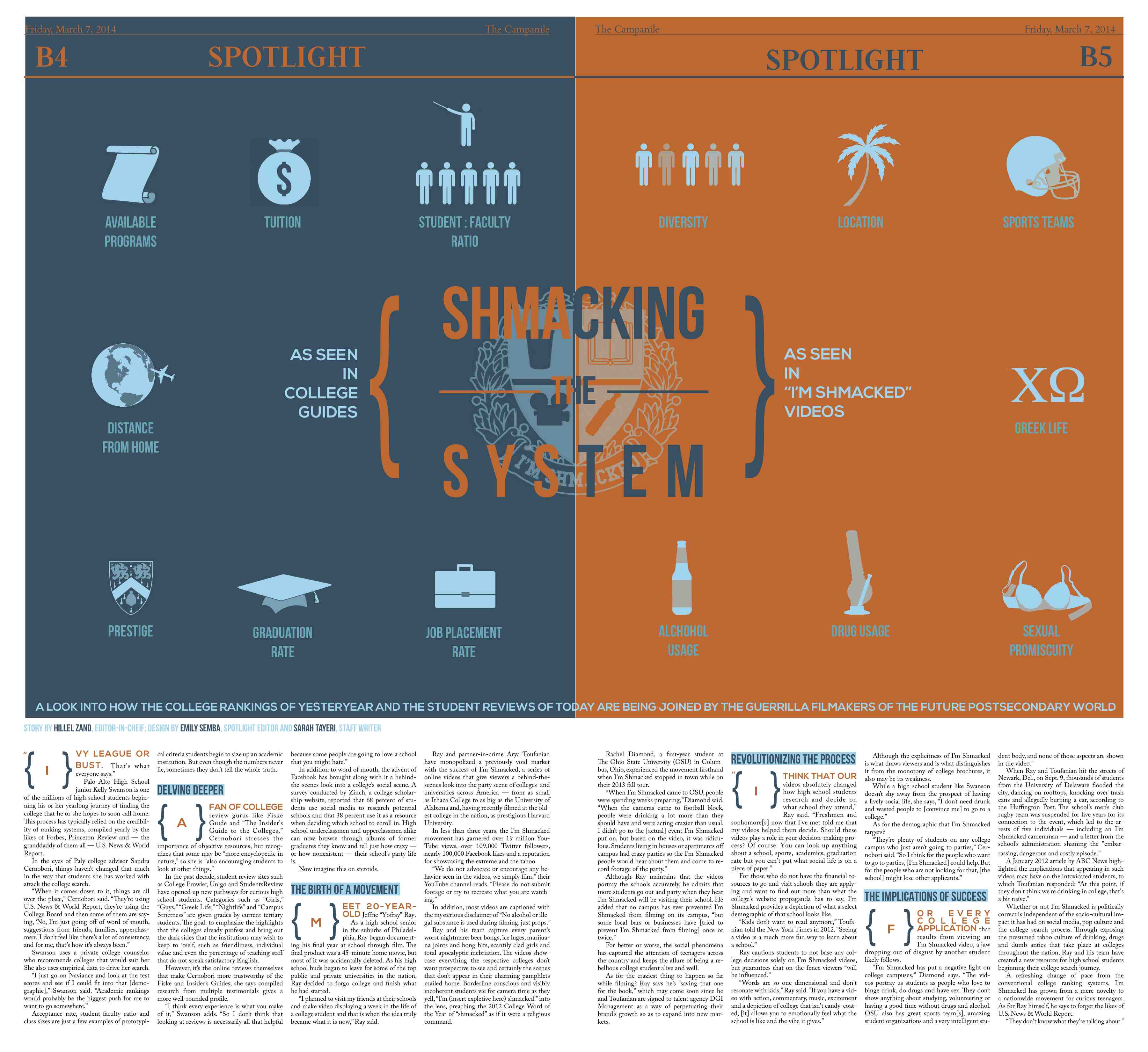 “Ivy League or bust. That’s what everyone says.”

Palo Alto High School junior Kelly Swanson is one of the millions of high school students beginning his or her yearlong journey of finding the college that he or she hopes to soon call home. This process has typically relied on the credibility of ranking systems, compiled yearly by the likes of Forbes, Princeton Review and — the granddaddy of them all — U.S. News & World Report.

In the eyes of Paly college advisor Sandra Cernobori, things haven’t changed that much in the way that students she has worked with attack the college search.

“When it comes down to it, things are all over the place,” Cernobori said. “They’re using U.S. News & World Report, they’re using the College Board and then some of them are saying ‘no, I’m just going off of word of mouth, suggestions from friends, families, upperclassmen.’ I don’t feel like there’s a lot of consistency, and for me, that’s how it’s always been.”

Swanson uses a private college counselor who recommends colleges that would suit her, and she also uses empirical data to drive her search.

“I just go on Naviance and look at the test scores and see if I could fit into that [demographic],” Swanson said. “Academic rankings would probably be the biggest push for me to want to go somewhere.”

Acceptance rate, student-faculty ratio and class sizes are just a few examples of prototypical criteria students begin to size up an academic institution. But even though the numbers never lie, sometimes they don’t tell the whole truth.

A fan of college review gurus like Fiske Guide and “The Insider’s Guide to the Colleges,” Cernobori stresses the importance of objective resources, but recognizes that some may be “more encyclopedic in nature,” so she is “also encouraging students to look at other things.”

In the past decade, student review sites such as College Prowler, Unigo and StudentsReview have opened up new pathways for curious high school students. Categories such as “Girls,” “Guys,” “Greek Life,” “Nightlife” and “Campus Strictness” are given grades by current tertiary students. The goal: emphasize the highlights that the colleges already profess and bring out the dark sides that the institutions may wish to keep to itself, such as friendliness, individual value and even the percentage of teaching staff that do not speak satisfactory English.

However, it’s the online reviews themselves that make Cernobori more trustworthy of the Fiske and Insider’s Guides; she says compiled research from multiple testimonials gives a more well-rounded profile.

“I think every experience is what you make of it,” Swanson adds. “So I don’t think that looking at reviews is necessarily all that helpful because some people are going to love a school that you might hate.”

In addition to word of mouth, the advent of Facebook has brought along with it a behind-the-scenes look into a college’s social scene. A survey conducted by Zinch, a college scholarship website, reported that 68 percent of students use social media to research potential schools and that 38 percent use it as a resource when deciding which school to enroll in. High school underclassmen and upperclassmen alike can now browse through albums of former graduates they know and tell just how crazy — or how nonexistent — their school’s party life is.

Now imagine this on steroids.

The Birth of a Movement

As a high school senior in the suburbs of Philadelphia, Ray began documenting his final year at school through film. The final product was a 45-minute home movie, but most of it was accidentally deleted. As his high school buds began to leave for some of the top public and private universities in the nation, Ray decided to forgo college and finish what he had started.

“I planned to visit my friends at their schools and make video displaying a week in the life of a college student and that is when the idea truly became what it is now,” Ray said.

Ray and partner-in-crime Arya Toufanian have monopolized a previously void market with the success of “I’m Shmacked,” a series of online videos giving viewers a backstage look into the party scene of colleges across America — from as small as Ithaca College to as big as the University of Alabama and, having recently filmed at the oldest college in the nation, as prestigious Harvard University.

In less than three years, the I’m Shmacked movement has garnered over 19 million YouTube views, over 109,000 Twitter followers, nearly 100,000 Facebook likes and a reputation for showcasing the extreme.

“We do not advocate or encourage any behavior seen in the videos, we simply film,” their YouTube channel reads. “Please do not submit footage or try to recreate what you are watching.”

In addition, most videos are captioned with the mysterious disclaimer of “No alcohol or illegal substance is used during filming, just props.”

Ray and his team capture every parent’s worst nightmare: beer bongs, ice luges, marijuana joints and bong hits, scantily clad girls and total apocalyptic inebriation. The videos showcase everything the respective colleges don’t want prospective to see and certainly the scenes that don’t appear in their charming pamphlets mailed home. Borderline conscious and visibly incoherent students vie for camera time as they yell, “I’m (insert expletive here) shmacked!” into the lens, preaching the 2012 College Word of the Year of “shmacked” as if it were a religious command.

Rachel Diamond, a first-year student at The Ohio State University (OSU) in Columbus, Ohio, experienced the movement firsthand when I’m Shmacked stopped in town while on their 2013 fall tour.

“When I’m Shmacked came to OSU, people were spending weeks preparing,” Diamond said. “When the cameras came to football block, people were drinking a lot more than they should have and were acting crazier than usual. I didn’t go to the [actual] event I’m Shmacked put on, but based on the video, it was ridiculous. Students living in houses or apartments off campus had crazy parties so the I’m Shmacked people would hear about them and come to record footage of the party.”

For better or worse, the social phenomena has captured the attention of teenagers across the country and keeps the allure of being a rebellious college student alive and well.

As fpr the craziest thing to happen so far while filming? Ray says he’s “saving that one for the book,” which may come soon since he and Toufanian are signed to talent agency DGI Management as a way of perpetuating their brand’s growth so as to expand into new markets.

“I think that our videos absolutely changed how high school students research and decide on what school they attend,” Ray said. “Freshmen and sophomore[s] now that I’ve met told me that my videos helped them decide. Should these videos play a role in your decision-making process? Of course. You can look up anything about a school, sports, academics, graduation rate but you can’t put what social life is on a piece of paper.”

For those who do not have the financial resources to go and visit schools they are applying and want to find out more than what the college’s website propaganda has to say, I’m Shmacked provides a depiction of what a select demographic of that school looks like.

“Kids don’t want to read anymore,” Toufanian told the New York Times in 2012. “Seeing a video is a much more fun way to learn about a school.”

Ray cautions students to not base any college decisions solely on I’m Shmacked videos, but guarantees that on-the-fence viewers “will be influenced.”

“Words are so one dimensional and don’t resonate with kids,” Ray said. “If you have a video with action, commentary, music, excitement and a depiction of college that isn’t candy-coated, [it] allows you to emotionally feel what the school is like and the vibe it gives.”

Although the explicitness of I’m Shmacked is what draws viewers and is what distinguishes it from the monotony of college brochures, it also may be its weakness.

While a high schooler like Swanson doesn’t shy away from the prospect of having a lively social life, she says, “I don’t need drunk and wasted people to [convince me] to go to a college.”

As for the demographic that I’m Shmacked targets?

The Implications of Success

For every college application that results from viewing an I’m Shmacked video, a jaw dropping out of disgust by another student likely follows.

“I’m Shmacked has put a negative light on college campuses,” Diamond says. “The videos portray us students as people who love to binge drink, do drugs and have sex. They don’t show anything about studying, volunteering or having a good time without drugs and alcohol. OSU also has great sports team[s], amazing student organizations and a very intelligent student body, and none of those aspects are shown in the video.”

When Ray and Toufanian hit the streets of Newark, Del., on Sept. 9, thousands of students from the University of Delaware flooded the city, dancing on rooftops, knocking over trash cans and allegedly burning a car, according to the Huffington Post. The school’s men’s club rugby team was suspended for five years for its connection to the event, which led to the arrests of five individuals — including an I’m Shmacked cameraman — and a letter from the school’s administration shaming the “embarrassing, dangerous and costly episode.”

A January 2012 article by ABC News highlighted the implications that appearing in such videos may have on the intoxicated students, to which Toufanian responded: “At this point, if they don’t think we’re drinking in college, that’s a bit naïve.”

Whether or not I’m Shmacked is politically correct is independent of the socio-cultural impact it has had on social media, pop culture and the college search process. Through exposing the presumed taboo culture of drinking, drugs and dumb antics that take place at colleges throughout the nation, Ray and his team have created a new resource for high school students beginning their college search journey.

A refreshing change of pace from the conventional college ranking systems, I’m Shmacked has grown from a mere novelty to a nationwide movement for curious teenagers. As for Ray himself, he says to forget the likes of U.S. News & World Report.

“I think they don’t know what they’re talking about.”