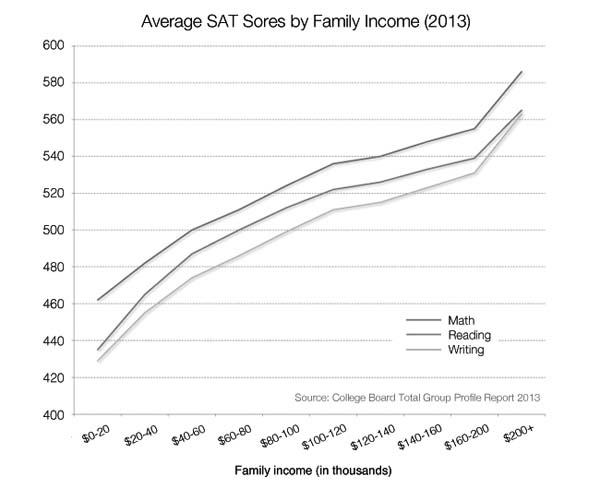 Graphical comparison of the average SAT scores with a family’s yearly income.

Are the changes to the SAT beneficial? NO

The changes announced for the new SAT format that will pilot in 2016 are not all bad, however it seems they fall short in achieving the College Board’s goals for the exam. Some components of the old test that are no longer part of the assessment actually did hold significant value.

First of all, as discussed in the New York Times article “The Story Behind the SAT Overhaul,” one of the largest factors that prompted David Coleman, the president of the College Board, to change the test was  that children of higher-income families can afford high dollar test-prep services, while middle and lower-income families cannot. As seen in the graph created by The Week, there is a clear correlation between a family’s income and average SAT scores. The improved results are commonly deemed to be a result of a family’s ability and willingness to contribute to what the New York Times cites as a “$4.5-billion-a-year industry” of SAT classes and tutors. Students seek private test-prep services because of their anxieties of how they will perform on this singular test that will be heavily considered in the college admission process and follow them later in life when applying for jobs.

Like the prophecy in the Harry Potter book series says, “either must die at the hand of the other for neither can live while the other survives.” The unsettling truth is that the infamous anxiety and stress of the SAT cannot be eliminated so long as the test lives on. Ambitious students who have the means to do so, will continue to seek and pay for expensive test-prep courses, regardless of changes to the test’s content.

Even if the new test will reflect more of the material being taught in classrooms, that ultimately will not change how much time and or money a student puts into preparing for the test. Additionally, changing the content will not change the ability of test-prep companies and tutors to “coach” students on how to “game the test” and learn strategies on how to succeed. On March 7, 2104, The Princeton Review released a statement concerning the changes to the SAT.

“A common refrain when these changes are announced is that they are being made because the old test was coachable, and that the new test will be better tied to curriculum and less coachable,” Deborah Ellinger, CEO of The Princeton Review, said. “We’ve never seen a test that wasn’t coachable.”

Coleman has, however, made a partnership with Sal Khan of the popular and free tutoring website, Khan Academy, to create additional practice for the SAT that will focus on the core knowledge being tested rather than test-taking strategies. While in theory Khan’s material will be available to students of all income brackets, only time will tell how successful the College Board is in encouraging particularly low-income students to make use of it.

As for the changes to the content itself, in general the College Board is moving in a positive direction by grounding its content more closely with what students actually learn in school, and by focusing on evidence-based style reading and writing. One upsetting change, however, is that of the vocabulary section. While the popular reaction to the thought of not having to memorize countless flashcards of words that have been criticized as esoteric and archaic was likely celebrated, some students were surely not nearly as pleased to bid farewell to the vocabulary section.

The College Board appears to no longer be encouraging young people to pursue richer vocabularies, when now more than ever it would appear that the opposite is crucial. With the Oxford English Dictionary officially adding “LOL” and “OMG” in 2011, and students even here at Palo Alto High School using other such abbreviations pervasively across electronic and actual means of communication, now is not the time for the College Board to undermine the importance of a well-developed vocabulary.

A strong vocabulary enables people to become eloquent, a characteristic that can greatly aid them throughout their lives. Used properly, it can improve others’ perceptions of them during interviews, or even in daily conversations. Although the College Board’s view that understanding the context of how words are used is important, questions of that nature already existed in the old form’s reading sections. Eliminating the completing the sentence questions is eliminating the only force that prompted young people to expand their own vocabularies. It is improbable now that a busy student will choose to learn hundreds of vocabulary words in their scarce free time. While that task may seem daunting, it was one of the most useful and beneficial aspects of the SAT that could actually serve of some purpose beyond the scope of the test.

It seems highly unlikely that the College Board will be able to eliminate the advantage of wealth that skews SAT results, as unfortunate of a predicament as that is. A test that measures raw intelligence rather than how well one prepared would be nice, but intangible. Also, I look to the College Board with despair as they abandon their noble albeit unpopular cause of encouraging youth to master vocabulary.