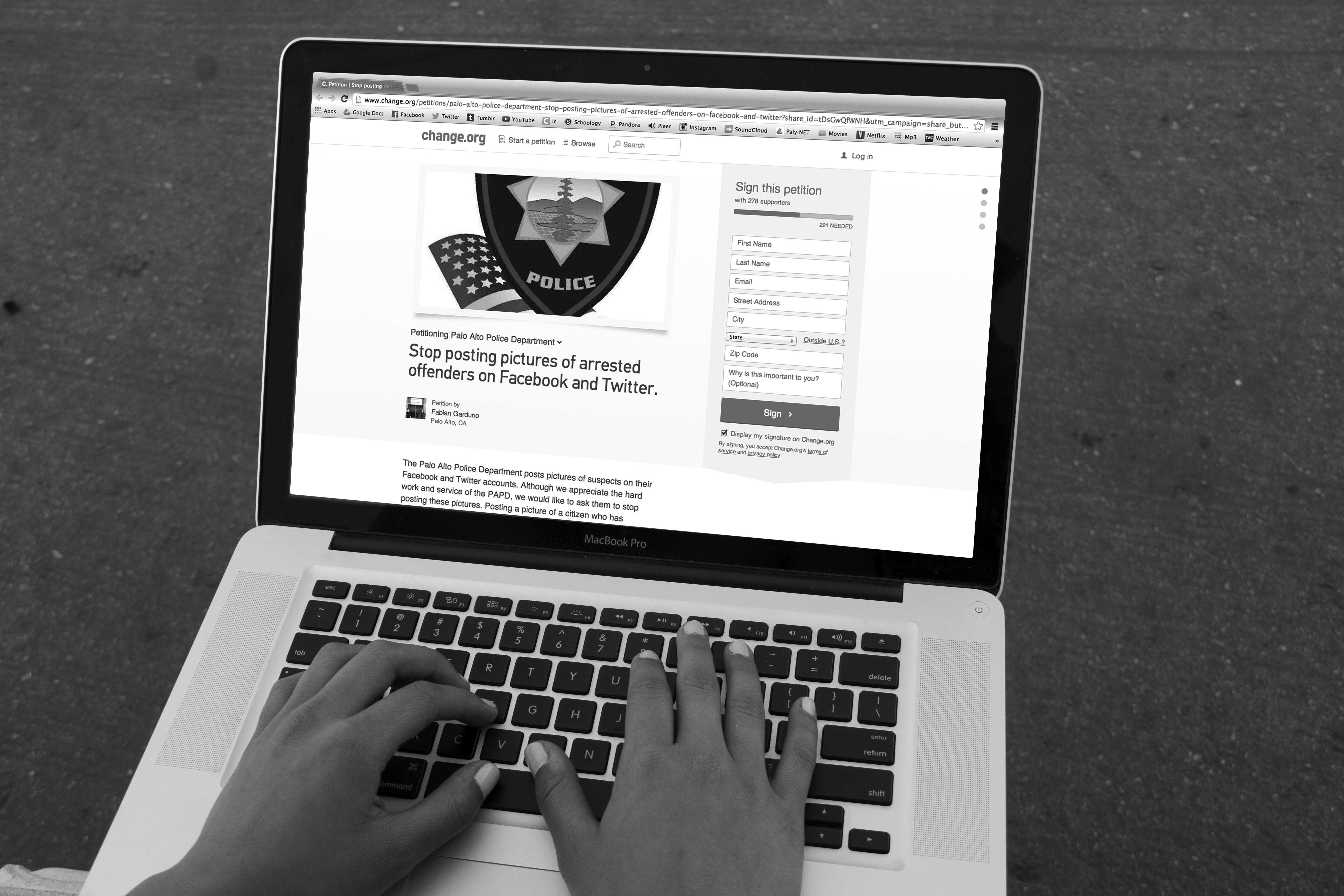 The petition, created to edify the opinions of many, allows people to “sign” by submitting their name and email address.

Shortly following the arrest of a Palo Alto High School (Paly) student on April 4, junior Fabian Garduno created an online petition to protest the posting of the arrested’s photo and personal information on various social media sites, including Facebook and Twitter.

The Palo Alto Police Department (PAPD) keeps its social media sites up-to-date in order to keep Palo Alto citizens informed and to publish posts of their recent successes. Beginning in August of 2013, the PAPD Facebook page began posting the mugshots of many of its busts, including detailed reports of the arrests, generating controversy within the community on the ethicality of this decision.

Set off by the posting of the arrested Paly student’s mugshot and reason for arrest, dozens of Palo Alto residents and Paly students voiced their opinions in the comment section of the PAPD post.

Many Paly students stood up for the arrested student, not to defend the crimes he committed, but to protect his privacy.

A few hours after the photo was put online, Garduno posted a link to a petition to “stop posting pictures of arrested offenders on Facebook and Twitter.”

Garduno had disliked the posting of photos by the PAPD since its inception, but saw the arrest of the Paly student as an opportunity for real change.

“It took the posting of a Paly student to get people to care about it enough,” Garduno said. “I could see that people had strong opinions, and I thought that a petition might have decent support.”

Garduno did not have a petition in mind before the arrest, but saw it as a way to corral the commenters’ energy into a formal complaint. Garduno assumed that the PAPD would not stop posting mugshots of those they arrested simply because a few dozen students demonstrated their displeasure through Facebook comments.

Garduno’s petition currently has 278 signatures. The website allows any user to write and create official petitions. By submitting an email address and a full name, any member of the public is able to agree to, or “sign,” the petition.

“You can choose to send [the petition] whenever you want, but the whole basis of the website is its accessibility to the public and the milestones it provides as encouragement,” Garduno said. “The rate of signatures has been slowing down considerably, simply because the people that want to sign it have already seen the link and signed the petition. I am going to try to max out the petition at 300 [signatures] and then send it to the Palo Alto Police Department.” To Garduno, the main focus of the petition is to make sure the PAPD understands the community’s displeasure with their actions.

“It’s not about whether the petition will work or not. I just think people have to stand up for what they think is right and believe that they have the power to change things,” Garduno said. “The ideal outcome of this whole situation would be that the PAPD would understand that there is a large enough part of Palo Alto that feels that what they’re doing is wrong and that they will try to do something about it. If you read the petition correctly, all we ask is that [the PAPD] make press releases about the people they arrest on their website. Then, they can post a URL on their Facebook or Twitter pages that links directly to the PAPD website. This way, whoever wants to be informed about the PAPD’s recent arrests can access them easily. I honestly believe this is a win-win situation.”

Several petition-signers argue that posting photos and detailed accounts of PAPD arrests is simply not beneficial to those who read them. By posting the photos, Garduno points out, the only result is shame and public humiliation to those arrested.

“I know the job of the PAPD is to protect and serve the community, and posting photos on social media sites just doesn’t fulfill that,” Garduno said. “By posting the photos, I almost feel like it’s the way it was in olden times when people would be put in stocks in the middle of the street and get tomatoes thrown at them; I think this must be kind of what it feels like.”

Garduno has faced a lot of opposition in creating the petition to stop the posts made by the PAPD. Many have scolded him for “defending” the crimes committed and “standing up for” the criminals. Others have told him that a petition, especially one started by a student, will do no good and cannot force the Police Department to make any real changes.

“I’m just going to go as far as I can until [the PAPD] personally tell me that I’m wasting my time and that they won’t do anything about it,” Garduno said. “I’m going to try to arrange a meeting with the head of the Police Department to represent the people who signed the petition, just to see what’s going on. I just think that people need to get their voices heard if they believe in something. Otherwise, what’s the point of arguing?”