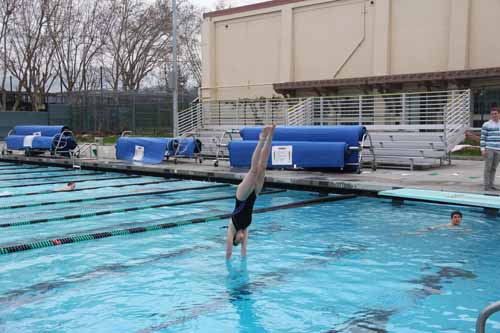 As the Palo Alto High School’s girls swimming and diving teams head towards the end of the season, both teams are eager to wrap up the season strong.

“Los Altos just moved into our league last year, so we were looking forward to this meet as a chance to practice our racing. Nevertheless, we are happy to have another win,” sophomore Emily Zhang said.

Although the meet against Los Altos was not very challenging, the team has been working hard and has been staying motivated despite the large amounts they have been swimming during practice recently.

“The team has been working incredibly hard,” Zhang said. “We have been putting in a lot of yardage, 8000 to 9000 a day, which is very gruelling.”

The upcoming weeks will be busy for the team as it prepares for the final events and meets of the season.

“Next week is busy for us. We have Los Gatos on Tuesday, our annual challenge set of 100 100’s [on] Thursday and the section challenge on Saturday,” senior captain Karina Goot said.

Over the course of the season, members of the team feel that they have bonded well and are a strong team, even though swimming is mainly an individual sport.

“We have come a lot closer as a team through the season and I think everyone knows what they need to do in order to win leagues,” Goot said.
As leagues approach, practices in the following weeks will focus on other aspects of swimming and racing rather than the amount that the team members swim.

“To prepare for our end of season meets we are going to cut back on the yardage and spend more time on stroke and technique,” Goot said. “We also are going to be focusing on the mental part of our races by doing visualization sessions in the dance room.”

The diving team has had a busy season as well. On April 12, the Paly diving team hosted the Palo Alto Diving Invite at home. Two team members, freshman Emma van der Veen and senior captain Julia Ragsdale placed in the top 13. One placed fifth with 330.40 points, while the second placed tenth with 262.30 points, respectively.

Although other members of the team did not make the top 13 at the meet, Van der Veen feels that the meet ran smoothly and everyone did their best.

“The invite went pretty well and it was a lot of fun seeing all of the amazing talent that comes from our area,” Van der Veen said.

Placing at such a high score, Van der Veen was able to qualify to represent Paly in upcoming CCS meets. She hopes to be able to place in the top 16 at these meets.

“I am looking forward to doing the best I can at CCS and hopefully getting in the top 16 scores so that I can score some points for our school,” Van der Veen said.