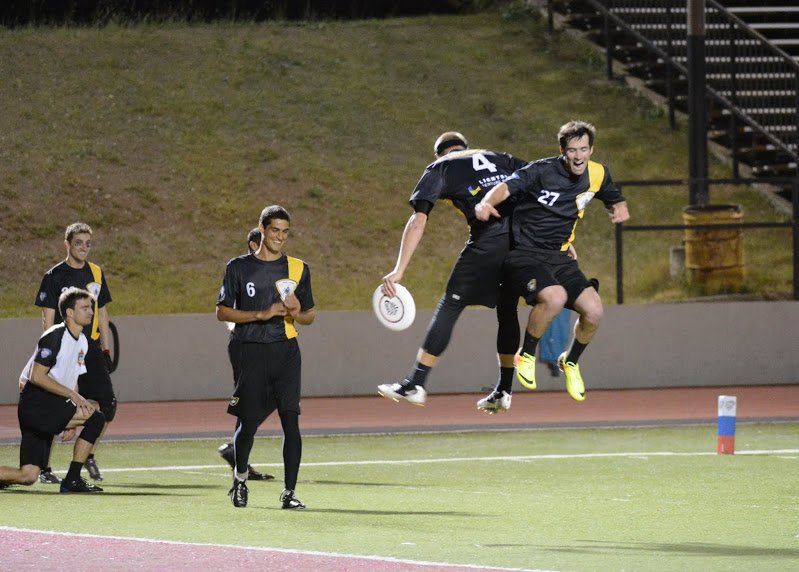 Palo Alto High School produces plenty of high-level athletes each year in a wide range of sports. Many students play for their respective colleges and a select few even go on to play professionally. Little known to the general public, however, is that there is a professional athlete among the Paly staff: Advanced Placement Psychology and World History teacher Chris Farina. Farina is a rookie for the San Jose Spiders in the American Ultimate Disc League (AUDL), the largest Ultimate Frisbee league in the world.
Farina took up an interest in Ultimate in high school after playing soccer and baseball throughout his adolescence.
“I started the spring of senior year,” Farina said. “I had a friend whose younger brother had played [Ultimate] for a little bit and convinced a bunch of us to take our senior springs off from the sports we had normally played.”
Farina’s professional career seemed to be an unexpected surprise that came out of nowhere.
“I had met the guy that eventually became the general manager of the Spiders… we had been playing in some smaller games, just around the South Bay,” Farina said. “He had talked about buying the franchise, building a team, and that was something I was really interested in… [the opportunity was] totally out of the blue.”
Despite Ultimate not entering Farina’s life until his senior year in high school, it quickly became his favorite sport to play, leapfrogging soccer and baseball in no time.
“It’s really great for keeping in shape… I love it for the competition and I love it for the community,” Farina said. “I like soccer a lot, I play squash a little with my wife, just for fun… ultimate is absolutely my favorite sport, unquestionably. It’s absolutely fantastic, just the speed, the quickness, the degree of skill it requires from all players, because everybody has to be able to throw and catch.”
Although the sport is not yet at the point where its athletes can make a living off their AUDL salaries, Ultimate does seem to be growing and has owners who are trying to expand the league.
“I really like what he’s [general manager]trying to do with the team,” Farina said. “He’s really trying to focus on growing the sport, improving the obvious, doing a lot of outreach.”
The AUDL is expanding rapidly, and after only three years now has teams spanning the entire country.
“There are two pro leagues at the moment,” Farina said. “The first year the [AUDL] started as just an Eastern conference, the second year they added a Midwest, and the third year they added a Western conference.”
The season began with the Spiders playing their first game of the season on April 12 at Foothill College.
“The [first] game went pretty well,” Farina said. “The attendance for the game was wonderful, we had 1,300 fans there.”
The Spiders won their opener by a score of 20-16 against their biggest rival, the San Francisco Flamethrowers.
“[A 20-16 score line] is pretty typical, it may be a little bit on the lower end, some of the games might be in the mid to high 20’s.”
Ultimate has three positions — handler, cutter and combo. Combo is simply someone who is adept at both positions.
“A handler is generally a midfield person, kind of like a point guard, and the cutter is someone you can think of as kind of a receiver, someone who is further downfield,” Farina said. “I’m listed as a handler.”
Farina has a rigorous travel schedule that is typical of many professional athletes. The Spiders must travel to play against teams from as far as Seattle, Vancouver and Salt Lake City along with many others.
“So far we’ve only practiced on the weekends, so that’s been fine, and all of our games are on the weekend too, so in that sense it doesn’t conflict,” Farina said. “But it does mean it takes an additional chunk of time out of my daily schedule, so it does make it a little bit tougher to get some things done, like grading papers, especially for the games where we have to travel.”
The AUDL hopes to expand to a point where its players can make a living off ultimate, but the league is nowhere close to realizing that goal.
“At this point, everybody has some other alternate job,” Farina said. “Some people are making maybe a couple grand, but that’s about it. I think that’s ultimately the way it will head, [having salaries high enough to make a living off ultimate].”
Farina said he hopes some students will try and make it out to a game or two, as the season extends into the summer. As if watching Paly teacher play professional sports wasn’t enough incentive, the Spiders have some of the best ultimate players in the world.
“Our GM has recruited three of the seven best players in the country, including one who is maybe the best player in the world,” Farina said. “It’s going to be as high level as you could possibly see.”