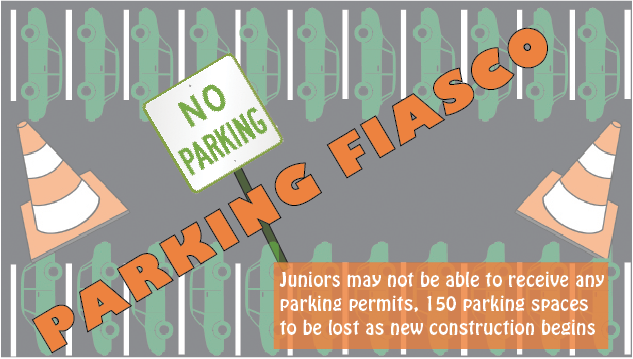 Students in the junior and sophomore classes may not be able to park cars in either of Palo Alto High School’s parking lots for the next two years, according to the Palo Alto High School administration. As a result of construction projects, the number of parking spaces will be limited.

According to Principal Kim Diorio, staging for the new Performing Arts Center (PAC) will begin in June 2014 and demolition of the Big Gym is expected to begin this coming summer.

Approximately 80 parking spaces will be lost from the Embarcadero lot and 60 to 70 spots from the Churchill lot, mainly near the entrance to Viking Stadium and the blacktop in between the baseball field and the Big Gym.

While parking enforcement each school year does not typically begin until a month after the first day of school, after a set date, most will likely not be able to park on campus without receiving a ticket. Diorio says that “the first few weeks of school are going to be interesting” before enforcement begins, which she believes will affect juniors and the dozens of sophomores who typically begin receiving their license midway through the year.

“We’re going to limit right now for seniors only and see what that looks like after we sell out to seniors,” Diorio said. “And then if we have any spots, people will probably have to fill out some kind of application, make their case for why they need their parking permit.”

Diorio emphasized that students who live far away or who need cars for after-school jobs or activities would get priority as soon as parking spots free up. But in the meantime, she encourages students to carpool, bike and walk to school.

In addition to a limited number of parking passes, the layout of the Embarcadero lot will change as soon as the staging for the PAC begins. While drivers currently have the option to turn left, right or go straight as they enter from Embarcadero Road, they will only be able to turn right and go in a one-way loop next year as a result of the construction, which is expected to cause traffic jams.

The PAC is expected to take 22 months to build, but Diorio is hopeful that the project can be finished sooner so that more student parking spots will become available. She said that staging was originally supposed to begin in March or April, but was postponed until June.

In 2013, local real estate mogul Richard Peery — the father and grandfather of Paly graduates and a current student — made a donation to build a new athletic complex that will inevitably disrupt all Paly athletic events and parking spaces for those athletic events.