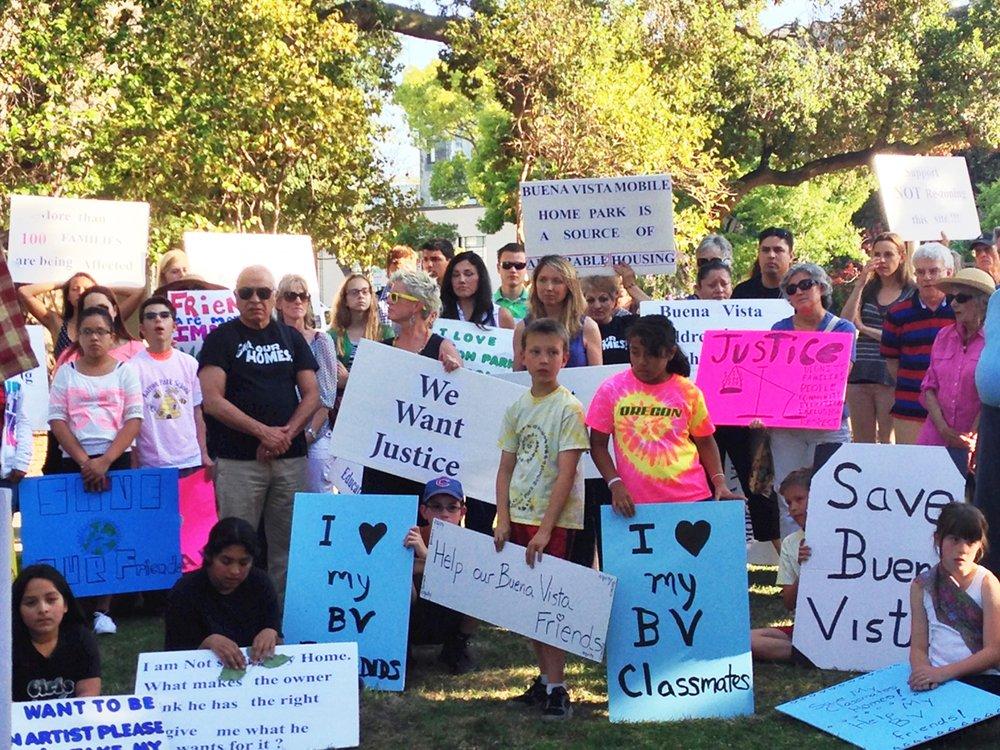 Members of the Palo Alto community peacefully gather at Cogswell Park to show their opposition to the plan to close the Buena Vista Trailer Park on May 12. The group was comprised of educators, local residents and students.

On May 12, dozens of city residents, students and educators joined at Cogswell Park on the corner of Bryant Street and Lytton Street to rally in support of Buena Vista Mobile Home Park, half an hour before a fate-deciding court hearing.

The Jisser family, the owner of Buena Vista, which currently houses approximately 400 individuals on slightly over four acres of land, has been looking to sell the property for over a year. If the owners follow the necessary steps in selling their land and have their required proposals approved, Buena Vista will be transferred over to Prometheus Real Estate Group and the current mobile home residents will be displaced.

The hearing, which was held in the nearby Avenidas Senior Center and led by administrative law judge Craig Labadie, aimed to take steps toward determining whether or not the Relocation Impact Report (RIR), a package the owner planned to offer the displaced residents, was sufficient or not. The proposal being evaluated was the sixth version of the original RIR — the preceding five were deemed incomplete by the City of Palo Alto. The newest report stated that the Jisser family would purchase mobile homes from their owners for their appraised values as well as subsidize the “startup costs” of finding a new living situation.

Community members present at the rally included Buena Vista families, educators, supportive Palo Alto residents and many young children. All protestors joined together countless times throughout the evening to shout “Si se puede, yes we can,” their slogan for the cause and rally. Among the protesters were numerous Barron Park Elementary School students supporting their classmates who live in the mobile home park.

“The reason we are here is to support the Buena Vista children that go to our school,” Barron Park fifth-grader Pavel Dobrov said. “We don’t want [the owners] selling Buena Vista to some overpriced housing thing.”

Pavel’s twin brother Mick Dobrov, also a fifth-grader at Barron Park, expressed concern for the education and living situations of his peers.

“I support Buena Vista because I want to make sure we can help keep our classmates in a good school and community and a safe place,” Mick said.

The Dobrovs’ classmates Grace Eldridge and Zoe Jung both voiced their support for helping their “friends save their houses” and “keeping classmates from having to move and leave their friends.”

Protester Joanne Erwin noted that her support for Buena Vista residents was rooted in her own recognition of what she perceived to be overly expensive housing and lack of affordable housing in the city.

“I moved [to Palo Alto] from Colorado very recently and housing prices in this town are just ridiculous,” Erwin said. “On top of that, these people [Buena Vista residents] have already been living in this city for years and are about to have their homes and everything taken away from them.”

An anonymous teenaged resident of Buena Vista expressed fear of losing many academic opportunities if forced to move from the mobile home park.

“I’ve been living at Buena Vista for maybe about five years now,” he said. “Living here has opened many doors for me. I get a great education at Terman Middle School. If the owners succeed in selling the property, I’ll have to abandon all the great doors that have been opened for me here.”