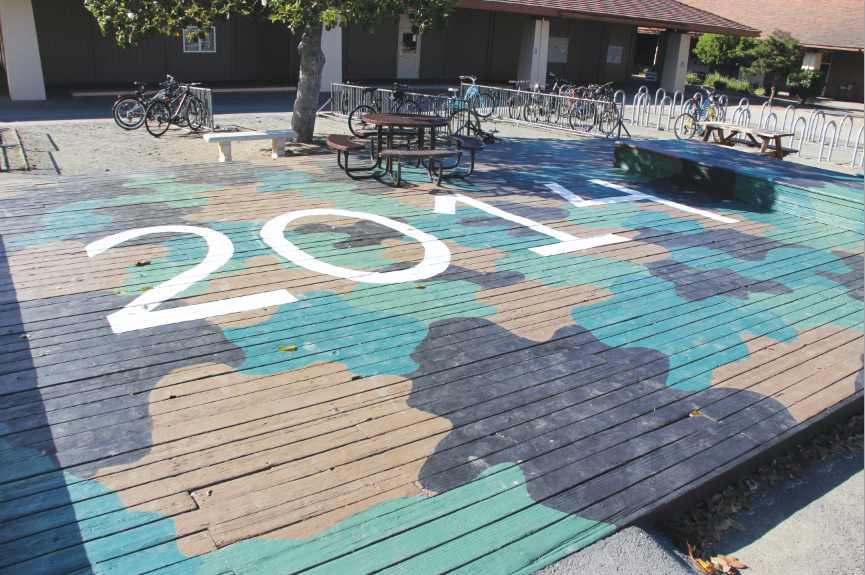 The Senior Deck flaunts its camouflage design a day after a group of juniors painted a “5” over the “4” in “2014,” but was taken off by seniors.

Palo Alto High School’s iconic Senior Deck has undergone a makeover after senior Hayley Tawzer spearheaded an effort to paint it as part of her “Twenty Percent Project” for World Literature.

“I started this project in January,” Tawzer said. “I think everyone was just always casually talking about it and then I just made it my project.”

The “Twenty Percent Project” requires seniors to spend twenty percent of their class time planning and executing a project of their choice.

According to Tawzer, approximately 25 to 30 of her peers helped her paint the deck after school on May 16, with approximately five or six of her close friends helping her complete the job the following day. The finished result was a eye-popping camouflage design encompassing the whole deck with “2014” painted in white across the middle.

The project was granted approval by Principal Kim Diorio and the Associated Student Body (ASB) provided funding for paint and other supplies.

The senior class returned to school on May 19 and most — if not all — were impressed with the new deck.

“It was all positive,” Tawzer said about the response she received. “It was all really good. I think it turned out really well.”

Tawzer and other seniors hope that the painting of the deck will develop into a new senior tradition. However, the new design was met with some backlash. On the night of May 19 — two days after the deck was completely painted — the “4” in “2014” was painted over in yellow paint with a “5,” leading to a riff between the seniors and juniors over social media and during the following school day.

As soon as a picture of the vandalized deck surfaced online at approximately 10:00 p.m., Tawzer and a couple of her friends rushed to Paly and were able to wipe off the paint with wet towels, as either the paint had not fully dried or it was paint not meant for wood surfaces. But even that was not enough to settle the rivalry between the two grades.

“To the person who got the fat thrill from painting over our class number on the senior deck: that was a gift from our class to yours and to the school,” senior Talia Brown wrote on Facebook.

“It took two long… days of painting in the sun and a hella of a lot of money out [of] ASB’s pocket, and my best friend worked [hard] to give that to you all… Have some respect.” Diorio, who says she left campus at about 8:30 p.m. on May 19, said that she was “not happy that the juniors did that, but kind of not surprised, too.”

During brunch on May 20, hundreds of students huddled around the edge of the Quad, with the juniors and seniors forming lines on opposite sides of the grass in a seemingly nonverbal deadlock. The silence was broken when Senior Class President Audrey DeBruine walked across the Quad with a bucket of yellow paint, which was apparently left behind by the Senior Deck after the vandalism took place. She placed the bucket at the feet of a group of juniors and walked away, which brought a round of approving cheers from the senior class.

While it is unclear as to whether or not there will be any punishment for the unknown perpetrators of the vandalism, and whether surveillance footage from security cameras will be used to identify them, Tawzer had a personal message for whoever painted over her project.