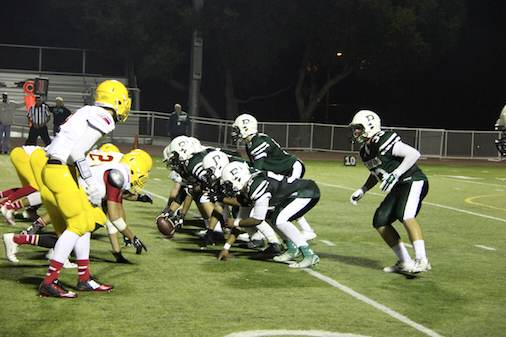 Paly prepares to hike the ball against Wilcox in their first league game of the season.

Football ready to make a comeback

After the Palo Alto High School football team won its first game of the season in an exciting fashion, things have unfortunately taken a turn for the worse, with the Vikings having lost their last four games.

In September, Paly played their first home game of the season against a tough Archbishop Mitty High School squad, to which they lost 55-14.

Following this game, Paly faced Palma High School at home on Sept. 27. Again, the Vikings faced a team that they, unfortunately, were not capable of matching.

Things looked up for the Vikings, as they were able to start from a clean slate in their first league game of the season against a tough Wilcox team at home on Oct. 3. Wilcox dominated the first half of the game, 20-6.

The Vikings’ new starting quarterback, junior Justin Hull, was able to lead an exciting and furious comeback, which climaxed with a jaw-dropping touchdown pass to junior Eli Givens with 17 seconds left. The Vikings decided to go for the two point conversion to win the game, yet were unsuccessful.

While this game put the Vikings in a hole in the standings, they are still proud of what they have accomplished and are confident for the future.

“Obviously losing four straight has been disappointing, but we’re moving in the right direction. That game showed us that we can play with the best teams in the league,” junior linebacker Shaun Pike said.