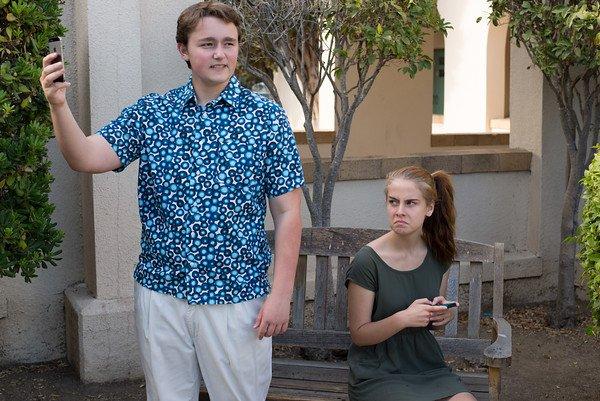 The Theatre 1 and 2 Showcases are decided within each class every year.

“Check Please” is about a series of blind dinner dates that take wrong turns just when it seems that situations couldn’t get any worse.

This year, Theatre 1’s showcase will include several monologues chosen by the theatre students. It will be held at the same time as the Theatre 2 showcase, which will be a British dialogue.

“Basically, [Theatre 2 is] going to do a bunch of scenes that are written or adapted for an English accent to show off our new accent skills we’ve been working on,” O’Reilly said. “Most of these scenes will be comedy but some are serious.”

In addition to the two showcases, Paly’s theatre is also planning to host its Play in a Day event, which happens once a year.

“Play in a Day is probably the coolest thing we do at Paly  Theatre,” O’Reilly said. “We get split into groups, and each group has a leader who writes a script the night before. Then, we get one day to block, costume, work on and perform the play in front of [the class].”

From Nov. 5 through Nov.  7 and Nov. 13 through Nov. 15, the theatre presented the play “Server of Two Masters” in the Haymarket Theatre. It was an adapted version of Carlo Goldoni’s Commedia dell’arte play called “The Servant of Two Masters.”

“The Servant of Two Masters” follows the character development of a male character, Truffaldino, who is always hungry. The characters are derived from “stock characters,” which are often used in commedia dell’arte. By the end of the play, after a special kiss with Smeraldina, Truffaldino realizes that he was also hungry for love. Some other themes in the play include confrontations between young and old people.

Paly’s theatre had its “The Drowsy Chaperone” auditions Nov. 18 through Nov. 21. “The Drowsy Chaperone” is the second semester major production and is a musical comedy that, ironically, mocks musicals. The show will be set in 1928, like the original script, and will include many students since it has an unlimited cast.