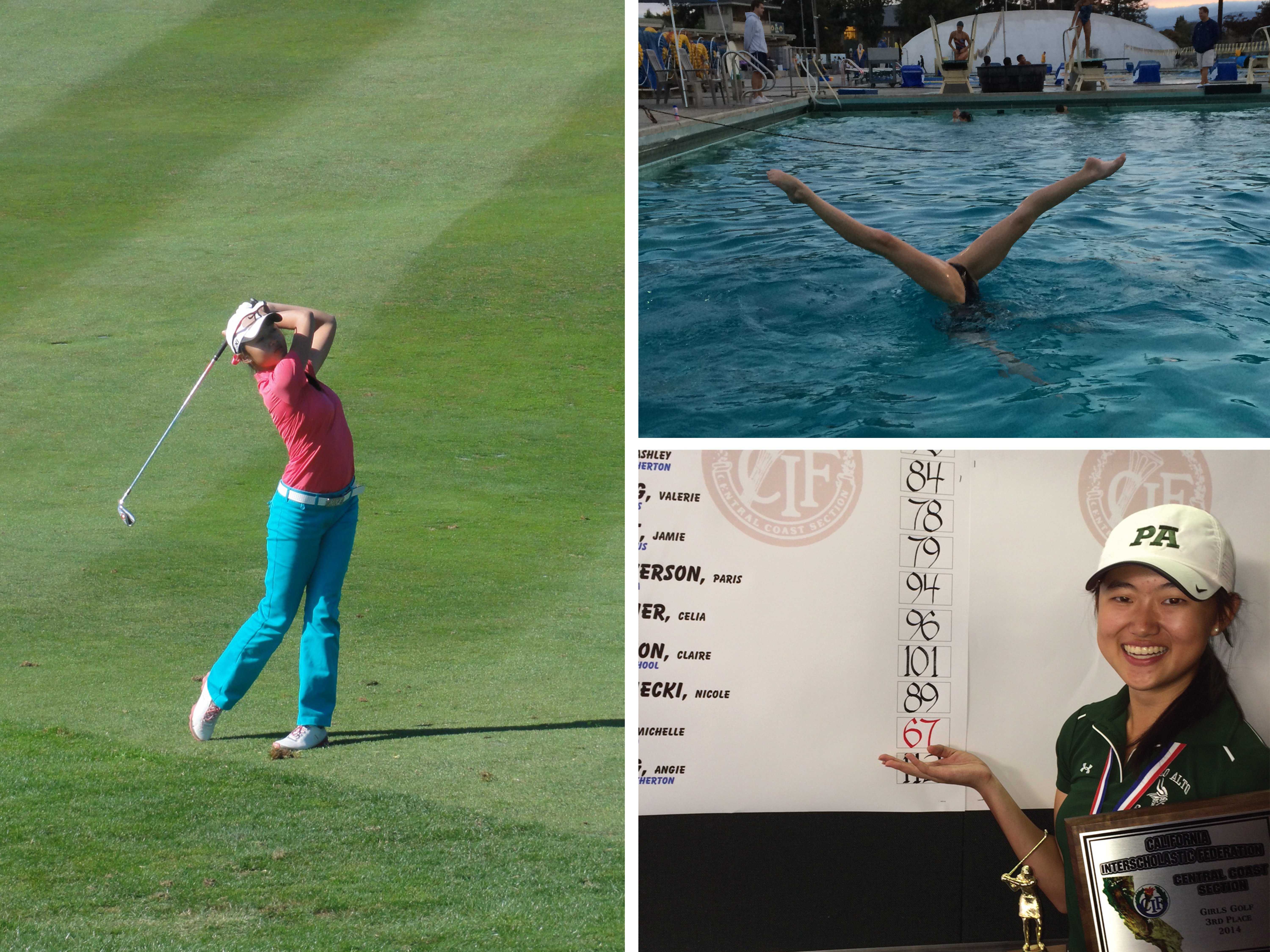 Let’s face it: for many, applying to colleges is no easy task. From filing regular applications and anxiously awaiting early action and early decision results to maintaining good first semester grades, most students are by no means alleviated from the pressures that come with being a first semester senior. Simply balancing school and college applications is a great feat. Adding on extracurricular activities adds much more to an already congested student schedule.

However, both senior synchronized swimmer Elle Billman and senior golfer Michelle Xie have already hopped over one of senior year’s huge hurdles, committing to attend their first choice schools. At Stanford University and Harvard University respectively, Billman and Xie will continue to compete next year at the National Collegiate Athletic Association (NCAA) Division I level. Both athletes’ offers have come as a result of remarkable academic and athletic success.

Billman began her synchronized swimming career in fourth grade, at the age of nine. For the past nine years, Billman has swam for the same club, the Santa Clara Aquamaids, and continues to practice for upwards of 30 hours throughout six practices per week. Since joining her synchronized swim team, Billman has also accomplished numerous awards and recognitions. Most notably, Billman represented the United States Junior National Synchronized Swimming Team in the 13-15 year old age group as a flyer, where she would perform while being held up in the air.

“I swam on the [ages] 13-15 National team when we made it to Nationals over the summer of my sophomore year,” Billman said. “We trained over the summer and went to Colombia, where we represented the United States at the Pan American Championships. We placed second in overall team events and second in combination events. I finished in third place in my duet and also placed sixth individually.”

On top of that, Billman survived a two and a half year battle at the age of three with Childhood Acute Lymphoblastic Leukemia and has since raised awareness in Leukemia-related organizations like Light the Night.

Xie, a three-year year member of Paly’s golf teams, has also golfed for the majority of her life. Now a two-time consecutive Central Coast Section (CCS) individual champion, Xie has qualified twice for the California Interscholastic Federation (CIF) State Finals, culminating her career at the 2014 CIF State Championship. During Paly’s offseason, Xie continues her passion for golf by practicing year-round and competing at national tournaments throughout the summer.

Golf has proven to be a great time commitment for Xie, as she is often out teeing up at golf courses across the nation while others may spend their summers in internships, traveling with family or serving the community, among other things.

“Golf is a time-consuming, money-consuming sport, so unlike many of my peers, I wasn’t able to apply for summer internships or community service opportunities or camps because I was out traveling around the nation for golf tournaments,” Xie said. “Summer vacation is about 10 weeks long, and I usually play in seven national tournaments. The other three weeks dispersed throughout consist of lessons, practices and local or regional tournaments, which are only a day or two.”

Xie’s hard work has clearly paid off, as she has received awards for both her athletic and academic success. She has placed in the top six at four national tournaments this summer, most notably qualifying for the Junior Professional Golfers Association Championship, winning the nationally televised Pro-Junior at the Nature Valley First Tee Open and placing second at the California Girls State Amateur Tournament in 2013.

In addition, Xie has been named to the American Junior Golf Association HP All-American Team twice, joining an elite group of 12 girls nation-wide with both golf and academic achievements.

For many top athletes, their final commitments to colleges come as early as sophomore year. Billman’s recruitment process ran much more smoothly, even as Billman began contacting college coaches at the end of her junior year.

Although Billman only received two offers from athletic programs, she was very happy that she had the option of Stanford University. According to Billman, Stanford seemed like the most natural fit.

“I only received offers from Stanford and University of Richmond,” Billman said. “I was really only considering my offer from Stanford because I prefer to stay in California and there aren’t many schools around here that have synchronized swimming.”

However, Xie’s involvement in golf recruitment proved to be very challenging as a result of unique Ivy League school procedures.

“Golf recruitment was kind of tricky and stressful for me,” Xie said. “Ivy League schools can’t make a decision very early, meaning that some players can verbally commit sophomore year, but I had to wait until the end of junior year to even know if I had a likely shot at college golf. This is due to the importance of academics in Ivy League schools, especially at Harvard. The coaches don’t have the final say; the Admissions Office does, so they need all my final grades and test scores in order to make a decision.”

Xie also considered Stanford and Yale University, but she opted to wait it out in hopes of a shot at playing at Harvard.

“I was juggling between just making a decision early and verbally committing at Yale or Stanford and going for it and waiting until September for Harvard,” Xie said. “Ultimately, Harvard was my first choice, so I stuck it out.”

Although Billman and Xie’s experiences in communicating with colleges as potential recruits were vastly different, both acknowledge that the process has the potential to be very tedious and tricky. Despite this, Billman believes that those who are very dedicated to their sport ought to continue and hope for the best.

“I definitely would tell others to stick with it [sports]; I know it’s really hard to commit so much time,” Billman said. “There have definitely been times [when] it’s been hard for me to go to practice all the time, but I’ve still been able to get through both school and swimming.”

Upon reflection of the overall recruitment process and continuous practices in the pool, Billman is greatly satisfied with her success, although she sacrificed a great deal.

“Looking back now, I probably could have balanced everything better, between going to school and having a greater social life,” Billman said. “But continuing synchronized swimming has definitely been worth it. Beyond getting into Stanford, I’ve accomplished so much in and out of my sport.”

Xie expresses similar sentiments, as she looks forward to continuing her academic and golf career at Harvard.

“Harvard is my top choice for college, so I’m really excited to be playing on their women’s golf team starting next fall,” Xie said. “Harvard has the emphasis on academics that I was looking for, and they also take their golf seriously. I’m excited to see what it’s like having an off-season and having time to pursue any major or career that interests me while also being able to become a better player with the help of the best Ivy team.”