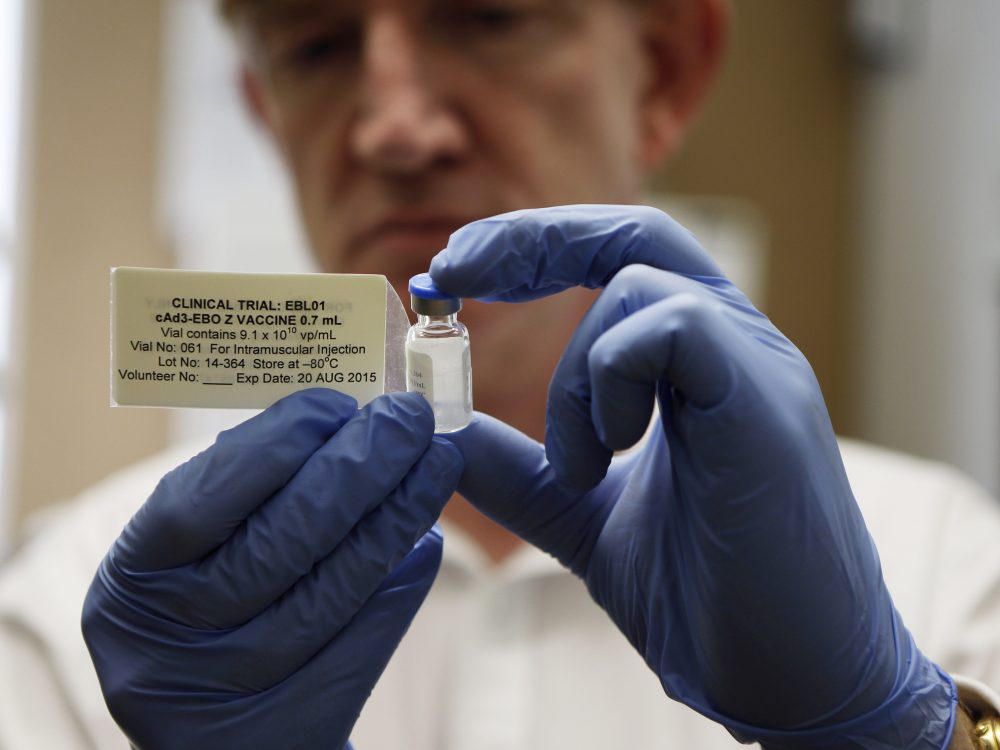 Director of the Jenner Institute and chief investigator of the trials, Adrian Hill, holds a vial of the Ebola vaccine his organizaiton developed.

Researchers are planning to test the Canadian-made Ebola vaccine in Lausanne, Switzerland in order to identify the correct dosage.

The largest Ebola vaccine trial to be held, the tests in Switzerland will include about 120 volunteers. Scientists may also hold similar trials in the African countries. These tests are a continuation of the earlier tests in the U.S. and the vaccine will be administered in higher dosages.

The trials are supported by the World’s Health Organization and were approved by Swissmedic, the Swiss regulatory authority for therapeutic products.

The vaccine was approved to be used at on about 120 individuals at the Lausanne University Hospital (CHUV).

“These trials show an almost unprecedented mobilisation on the part of countries, health agencies and industry to pitch in and help to curb the current Ebola epidemic,” Dr Marie-Paule Kieny, Assistant Director-General for Health Systems and Innovation at the World’s Health Organization (WHO) said. “If the vaccines prove to be safe and effective and we move to production and distribution scale-up, this will be the fastest vaccine roll-out we have had in response to a public health emergency to date.”

Twenty vials of the Canadian vaccine had been donated to the U.S. for the first ever Ebola vaccine trial on humans, which began in early September.

The U.S. trials were able to successfully determine the safety of the vaccine in low dosages in 13 people.

“This provides hope because if the Canadian vaccine is shown to be safe and effective, it will stop this devastating outbreak,” Canadian Health Minister Rona Ambrose said during a conference call from Calgary on Fox News.

The Canadian vaccine has progressed greatly since developed. This progression has not only relieved scientists and people directly affected by Ebola, but it has also provided comfort to the general population.

“The fact that they’ve made an Ebola vaccine is a good thing because it can keep us from having an epidemic,” senior Cameron Aishin said. “Plus there’s a ton of people who are not super sanitary.”

The vaccine is licensed to Newlink Genetics Corporation, which is based in Ames, Iowa. The vaccine had only been tested on animals previous to all human trials.

With the rush to test the vaccine and create sufficient amounts of it, the small biotech company is under pressure.

NewLink Genetics has been working efficiently and safely so far, but there has been much doubt as to whether or not the company has the ability or experience to keep pushing the project forward.

“I definitely think they need to expand their project to include other major companies,” junior Alby Leng said. “There will be faster progress and greater efficiency and there won’t be much conflict either because everyone will be working towards the same goal because Ebola is a global issue.”

“It sort of tricks your body into thinking there might be Ebola around, but you don’t get sick from it, you don’t get Ebola,” Dr. James Campbell, a researcher at the University of Maryland’s School of Medicine, said on CTV News.

The creation and testing of the vaccine is only the beginning of a long process.