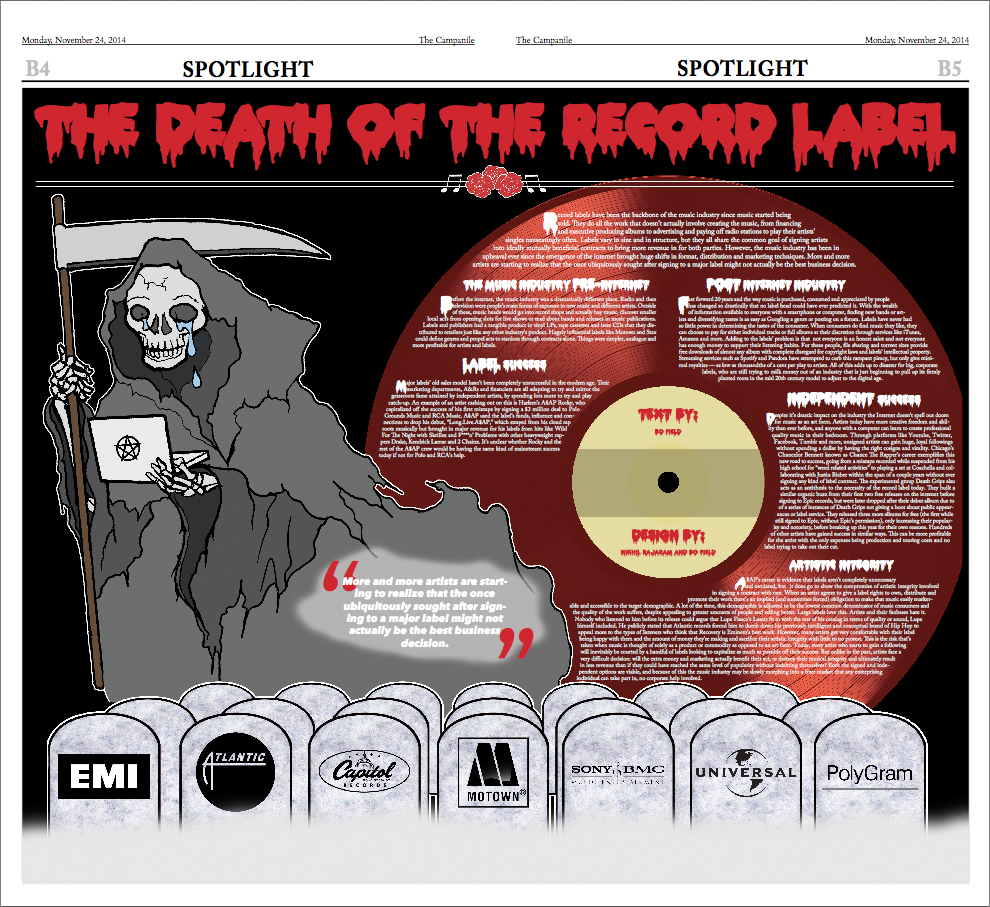 The Death of the Record Label

Record labels have been the backbone of the music industry since music started being sold. They do all the work that doesn’t actually involve creating the music, from financing and executive producing albums to advertising and paying off radio stations to play their artists’ singles nauseatingly often. Labels vary in size and in structure, but they all share the common goal of signing artists into ideally mutually beneficial contracts to bring more revenue in for both parties. However, the music industry has been in upheaval ever since the emergence of the internet brought huge shifts in format, distribution and marketing techniques. More and more artists are starting to realize that the once ubiquitously sought after signing to a major label might not actually be the best business decision.

Before the internet, the music industry was a dramatically different place. Radio and then television were people’s main forms of exposure to new music and different artists. Outside of these, music heads would go into record shops and actually buy music, discover smaller local acts from opening slots for live shows or read about bands and releases in music publications. Labels and publishers had a tangible product in vinyl LPs, tape cassettes and later CDs that they distributed to retailers just like any other industry’s product. Hugely influential labels like Motown and Stax could define genres and propel acts to stardom through contracts alone. Things were simpler, analogue and more profitable for artists and labels.

Fast forward 20 years and the way music is purchased, consumed and appreciated by people has changed so drastically that no label head could have ever predicted it. With the wealth of information available to everyone with a smartphone or computer, finding new bands or artists and diversifying tastes is as easy as Googling a genre or posting on a forum. Labels have never had so little power in determining the tastes of the consumer. When consumers do find music they like, they can choose to pay for either individual tracks or full albums at their discretion through services like iTunes, Amazon and more. Adding to the labels’ problem is that  not everyone is an honest saint and not everyone has enough money to support their listening habits. For these people, file sharing and torrent sites provide free downloads of almost any album with complete disregard for copyright laws and labels’ intellectual property. Streaming services such as Spotify and Pandora have attempted to curb this rampant piracy, but only give minimal royalties — as low as thousandths of a cent per play to artists. All of this adds up to disaster for big, corporate labels, who are still trying to milk money out of an industry that is just beginning to pull up its firmly planted roots in the mid 20th century model to adjust to the digital age.

Major labels’ old sales model hasn’t been completely unsuccessful in the modern age. Their marketing departments, A&Rs and financiers are all adapting to try and mirror the grassroots fame attained by independent artists, by spending lots more to try and play catch-up. An example of an artist cashing out on this is Harlem’s A$AP Rocky, who capitalized off the success of his first mixtape by signing a $3 million deal to Polo Grounds Music and RCA Music. A$AP used the label’s funds, influence and connections to drop his debut, “Long.Live.A$AP,” which strayed from his butt rap roots musically but brought in major revenue for his labels from hits like Wild For The Night with Skrillex and F****n’ Problems with other heavyweight rappers Drake, Kendrick Lamar and 2 Chainz. It’s unclear whether Rocky and the rest of the A$AP crew would be having the same kind of mainstream success today if not for Polo and RCA’s help.

Despite it’s drastic impact on the industry the Internet doesn’t spell out doom for music as an art form. Artists today have more creative freedom and ability than ever before, and anyone with a computer can learn to create professional quality music in their bedroom. Through platforms like Youtube, Twitter, Facebook, Tumblr and more, unsigned artists can gain huge, loyal followings without spending a dollar by having the right cosigns and virality. Chicago’s Chancelor Bennett known as Chance The Rapper’s career exemplifies this new road to success, going from a mixtape recorded while suspended from his high school for “weed related activities” to playing a set at Coachella and collaborating with Justin Bieber within the span of a couple years without ever signing any kind of label contract. The experimental group Death Grips also acts as an antithesis to the necessity of the record label today. They built a similar organic buzz from their first two free releases on the internet before signing to Epic records, but were later dropped after their debut album due to of a series of instances of Death Grips not giving a hoot about public appearances or label service. They released three more albums for free (the first while still signed to Epic, without Epic’s permission), only increasing their popularity and notoriety, before breaking up this year for their own reasons. Hundreds of other artists have gained success in similar ways. This can be more profitable for the artist with the only expenses being production and touring costs and no label trying to take out their cut.

A$AP’s career is evidence that labels aren’t completely unnecessary and outdated, but sit does go to show the compromise of artistic integrity involved in signing a contract with one. When an artist agrees to give a label rights to own, distribute and promote their work there’s an implied (and sometimes forced) obligation to make that music easily marketable and accessible to the target demographic. A lot of the time, this demographic is adjusted to be the lowest common denominator of music consumers and the quality of the work suffers, despite appealing to greater amounts of people and selling better. Large labels love this. Artists and their fanbases hate it. Nobody who listened to him before its release could argue that Lupe Fiasco’s Lasers fit in with the rest of his catalog in terms of quality or sound, Lupe himself included. He publicly stated that Atlantic records forced him to dumb down his previously intelligent and conceptual brand of Hip Hop to appeal more to the types of listeners who think that Recovery is Eminem’s best work. However, many artists get very comfortable with their label being happy with them and the amount of money they’re making and sacrifice their artistic integrity with little to no protest. This is the risk that’s taken when music is thought of solely as a product or commodity as opposed to an art form. Today, every artist who starts to gain a following will inevitably be courted by a handful of labels looking to capitalize as much as possible off their success. But unlike in the past, artists face a very difficult decision: will the extra money and marketing actually benefit their act, or destroy their musical integrity and ultimately result in less revenue than if they could have reached the same level of popularity without indebting themselves? Both the signed and independent options are viable, and because of this the music industry may be slowly morphing into a freer market that any enterprising individual can take part in, no corporate help involved.