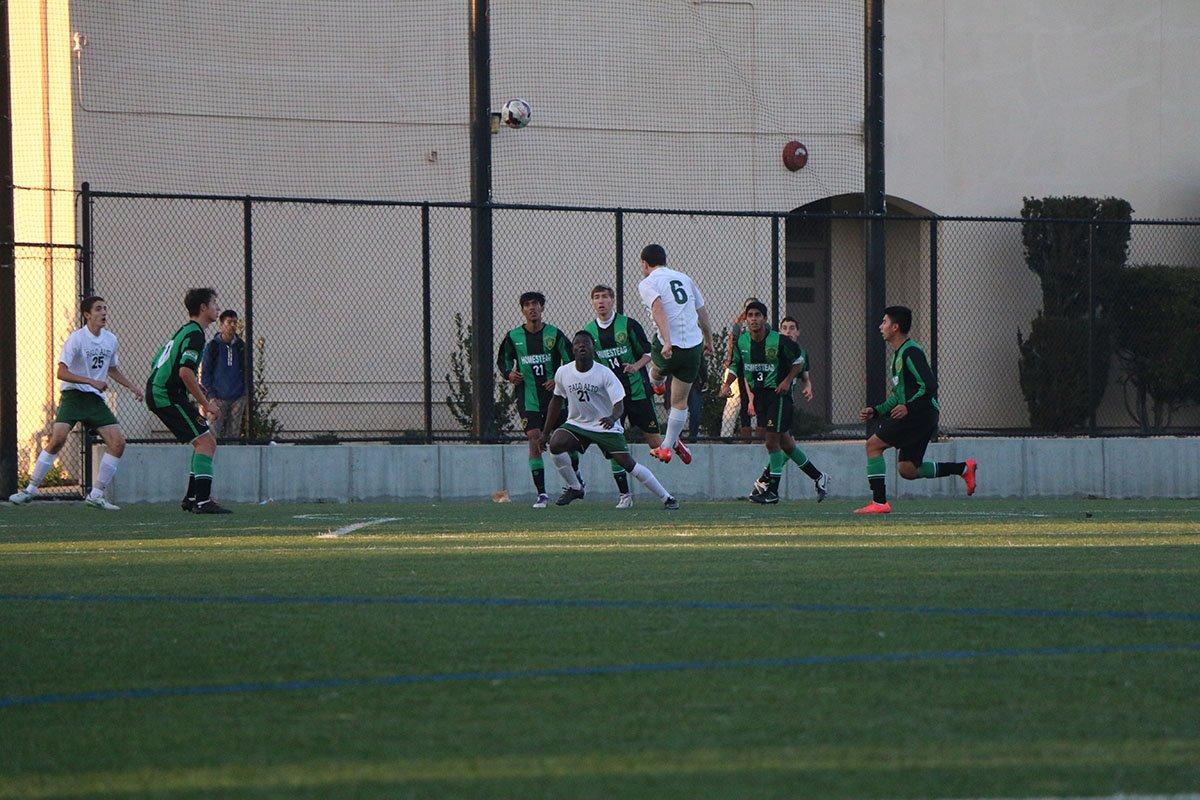 Varsity player Michel Siaba intensely watches the ball as it comes back down during Paly’s game against Homestead. The Vikings went on to win the game by a score of 1-0. Paly has yet to give up a goal to its opposition.

At 4:04 p.m. on Thursday, Jan. 22, Palo Alto High School was second in the De Anza Division, below Homestead only on goal difference. At 5:45 p.m., the referee blew a penalty in Homestead’s favor. Homestead has the best attack in the league, having scored eight goals in four games prior to their matchup with Paly. A goal seemed inevitable. Only it wasn’t. At 5:46 p.m., Paly was still top, still on track to maintain their blank slate: in seven games, Paly has yet to concede a goal. It is true Paly hasn’t scored too many goals either, having won all but one game by a score of 1-0.

It would be hard to look past Paly’s defense as the key factor in this victory, especially in sophomore goalkeeper Eli Friedlander’s performance. As fatigue began to set in for Paly’s usually solid defense, it grew apparent that excellence seems to run throughout the squad, all the way to the keeper. Friedlander dove sharply to his left to save the penalty and impressively dominated his area throughout the second half.

The game promised to be one fought with tension from the opening exchanges, with the first foul called moments into the game. The referee proved his low tolerance early on in the game by freely issuing yellow cards. However, the game continued to be marked by brutal clashes and crunching tackles, which the Paly defenders seemed to win more often than not. Paly’s attitude throughout the game, and more importantly, throughout the season so far was exemplified by its forwards. As the game was generally fought out in the middle of the pitch, the forwards saw little to run on to, but they continued to press throughout the game. Paly has a set of forwards-Edward Chen, Dami Bolarinwa, Ariya Momeny and Michel Siaba-capable of pushing the team forward.

Their persistence on the field was rewarded when Siaba was able to score a goal by running  through onto senior midfielder Wesley Woo’s through ball to get past the oncoming keepers.

The last few minutes provided some gripping drama, with wave after wave of Homestead attack being held off by rugged defending, and some excellent positioning from Friedlander. There were even a couple of chances for Paly to extend its lead, but both Bolarinwa and Siaba were unfortunate as last ditch tackles from Homestead defenders stopped the forwards.

Paly’s defensive showings have led to the team being ranked 24th in the nation, a feat that speaks for itself. Although there are murmurs of a potential playoff challenge, coach Don Briggs was quick to play down Paly’s prospects this year.  Briggs said, “It’s way too early [to discuss playoffs]. We aren’t even at the halfway spot, and it’s going to be a tough second half too, as these teams now know how we play.”

Nonetheless, spirits remain high in the Paly dressing room as they look forward to a second round of games. If the team continues to play with the same sort of solidity, they may not  need Friedlander’s penalty spot heroics to win their games.

Paly then proceeded to win at Los Altos High School, by the now standard 1-0 scoreline. Barring a minor setback in a 0-1 loss to Monta Vista, Paly’s season so far has been marked by impressive defensive solidity and a certain efficiency in attack that always provides the necessary goal that the defense can then consolidate and hold on to until the final whistle.