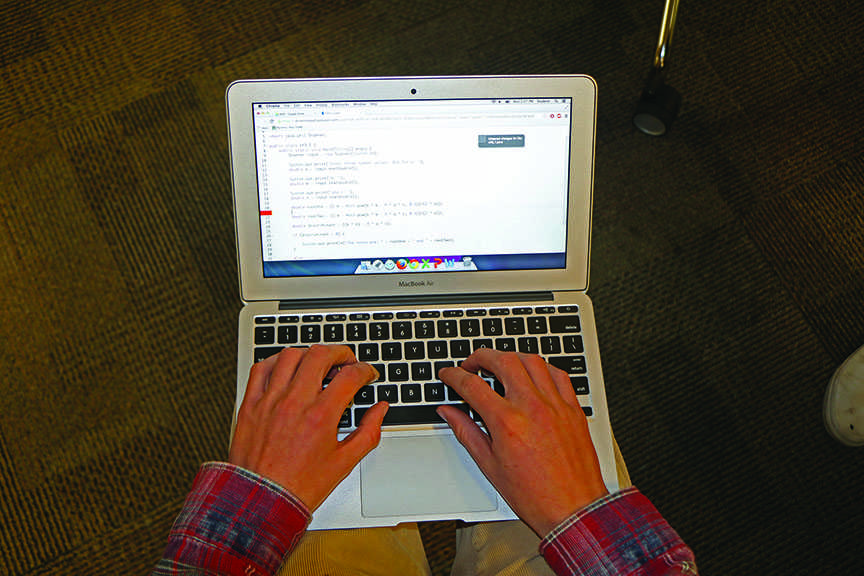 A student studies intently for his computer science class in the Media Arts Center.

We as students have always been encouraged to learn foreign languages as early as possible in order to retain the knowledge and culture of different countries. Now, we are required to take at least two years of a foreign language in order to graduate from Palo Alto High School. Students generally continue to approach foreign languages in one of two general manners. Some students genuinely enjoy learning to grasp firsthand the ability to learn foreign literature and culture. Other students, however, cram verb and adjective forms, vocabulary and basic customs in order to endure the year just to fulfill the world language requirement.

Given the recent demand for jobs and other future opportunities spanning from the continuous advancement and domination of technology in society, we as a school should continue in that direction and recognize computer science courses as an alternative to our current world language classes and as a means worthy of obtaining world language credit.

World language classes maintain an inherent goal of teaching students to communicate and interpret foreign languages by synthesizing vocabulary words into coherent speech and writing. Only allowing languages deemed conversational just to humans in everyday actions to meet Paly’s world language requirement remains a flawed position, as the programming courses that Paly offers arguably maintain the same core goals and values but do not fulfill the same academic requirements as language counterparts do.

Coding at the secondary school level provides a stronger foundation for students who first learn programming languages in a similar manner to the way in which languages are easier to solidify in one’s brain at a young age. In the same way languages possess their own spelling and grammar conventions, programming language syntaxes serve as predefined rules that any functioning program must follow.

In order for a sentence to be cohesive and preserve meaning in a conversation, it must be grammatically correct to an extent; if there exists even one syntactical or logical dysfunction in a program, runtime and compile time errors overtake the program.

For  example, multiple grammatical or spelling mistakes may appear and are even sometimes expected in a satisfactory essay; a spelling mistake or a logical fallacy in a line of code earns you partial credit at best for what is still broken to an extent.

While computer science classes teach the same general skill set that foreign languages do, it seems unreasonable to not grant such similar classes the same world language credit.

Not many high schools across the nation provide an AP Computer Science class, let alone the opportunity to take four years of programming. Attending a school fortunate enough to offer top computer science classes, students ought to be encouraged to take advantage of such opportunities as a world language.

Compared to our counterparts on the Eastern Hemisphere, American secondary school systems as a whole have underemphasized the importance of coding in today’s economy. According to a study conducted by the National Center for Education Statistics, high school participation in computer science has actually decreased six percent over a span of 20 years, from 25 percent to 19 percent of high school students. On the other hand, the Bureau of Labor Statistics projects employment in all computer occupations is expected to increase by 22 percent by 2020, showing a disconnect between computer science programs in secondary schools and current information and computer technology job figures across the nation.

Although Paly’s computer science program has expanded with a great influx of new students pursuing related fields, revising the world language requirement would allow more Paly students to prepare and thrive in an increasingly demanding technological workforce environment. As a result of opportunities in computer science, we as a society may advance through means of merging with other subjects; in order to reflect this advancement in society, students should be encouraged to pursue such fields as a world language.