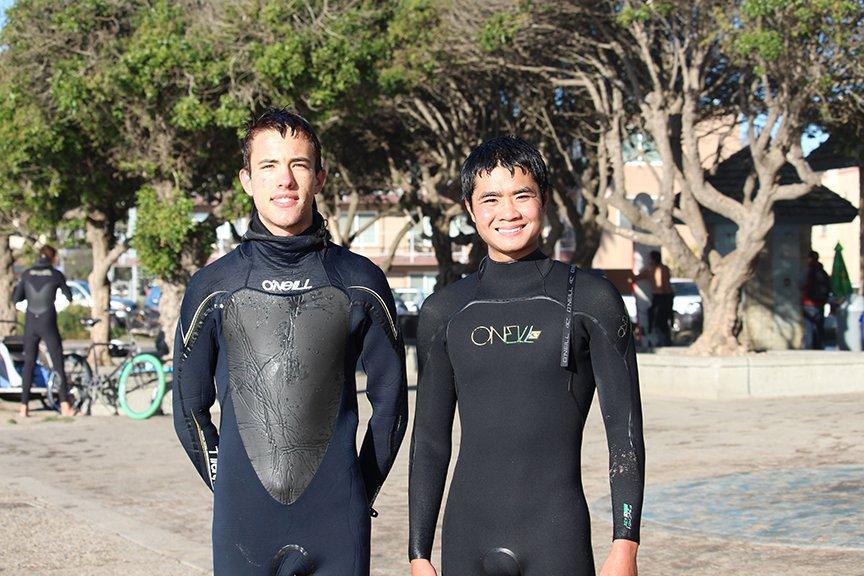 At 8:03 in the morning, Kai and I strap our stiff leashes to the boards and get ready to launch into the water. The rising sun is just starting to warm the coarse sand, but our feet are freezing as we walk toward the water. Head high waves crash against the rocks further down the beach. Already, there were roughly 60 surfers in the water.

Kai had been surfing since he was five-years-old and decided to teach me. According to Kai, the day we picked to surf was just about perfect. I had my doubts about the seven-foot waves which spit foam high into the air. Nevertheless, I stood on the sand of Capitola beach, which, according to Kai, is the friendliest beach in Santa Cruz.

The first thing I noticed when I got into the water was how cold it was. The slightly baggy neoprene wetsuit that was supposed to keep me warm smelled of rubber. Kai and I paddled out to where the waves were breaking, and I watched Kai catch a ride all the way to the beach. How hard could this be?

After ten minutes battling the waves, Kai suggested that we paddle down the beach where the waves were a bit smaller and less crowded. Seconds after arriving at the spot, he pointed the nose of my board toward shore and screamed at me to paddle. As the wave approached he gave me a push to increase my speed. The wave propelled me forward and I managed to push myself to a standing position. Suddenly, I was rocketing towards shore feeling excited, exhausted and terrified that I got up on my first try. After about an hour I started to get so cold that I had to get out of the water. I sat and watched Kai surf with the experts.

Thomas may make surfing sound exciting and hip, but like any other sport, there are a few risks. When I was ten years old another surfer smashed into the back of my head, giving me a concussion and opening a gash that required four staples. I have seen people get swept about a half mile out from the beach by strong currents. The worst part is the rocks. They will cut up your feet, your board or pretty much anything that comes close to them. However, most risks can be avoided by being cautious and not paddling out into conditions you cannot handle. So when I said that the seven foot waves were perfect for Thomas, I lied.

There are three things you need before you can ride in style: a board, a leash and a wetsuit. You can get a longboard, shortboard, fish, hybrid or malibu surfboard. Trust me, the eight foot Costco Wavestorm is the perfect board for every novice surfer. Once you get that fancy board you need something to prevent it from flying into the rocks (and other people). This is where that leash comes in, tethering the board to your ankle. Finally, there is the wetsuit. Santa Cruz is not Hawaii, and the water is cold. How cold? Try fifty-three degrees. Without a wetsuit, you’ll become friends with hypothermia. O’Neill usually makes the best wetsuits, though Body Glove and Ripcurl are also good options.

So you’ve got the equipment and the knowledge, now all you need is to head out to a break that is right for you. Within Santa Cruz, there are three breaks that cater to beginners. Capitola beach, 38th Avenue and Cowells beach are all excellent places for first time surfers.

Surfing in California has taken on a localized, almost aggressive, vibe as it became more popular. Even the “recreational” surfers will shout at people to get off waves and even threaten physical violence. However, surfing for me is about losing track of time in the rolling waves. If you ever want to head out and experience the thrill of one of the best activities,  Santa Cruz, one of the greatest spots, is just a mere hour away.