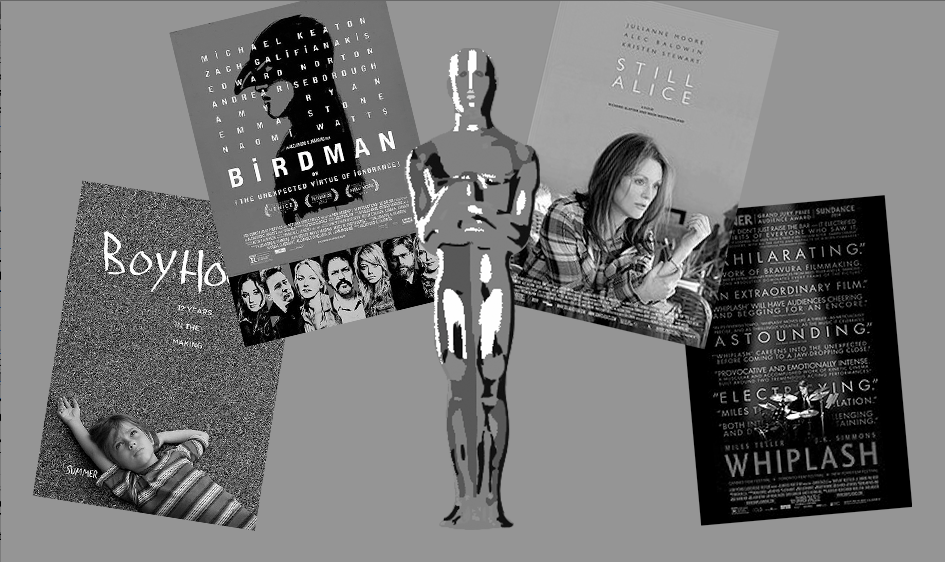 Predictions for the 2015 Academy Awards winners

It would be a shame and a waste of twelve long years of hard work if “Boyhood” did not take the Oscar for Best Picture. The film follows Mason Evans Jr. and his broken family from his childhood to his late teenage years, with the same actors portraying the same characters for all 12 years. Nothing in this film is as intense or dramatic as many of the other films nominated in this category, but that is the very reason why “Boyhood” touches audiences the most. Watching the movie is like watching life, and we get to see Mason grow and more inspiringly, his parents, grow before our eyes in a manner that everyone can relate to. There is no climax and there is no closure, but that’s life, and “Boyhood” does an exceptional job of depicting it.

Following the trend of winning Best Picture and Director, Linklater seems to be the most obvious choice for the Oscar for his work on “Boyhood.” Being dedicated to one film project for 12 years is a feat in itself, and Linklater manages to bring out truthful performances from all his actors throughout the process. His filming of simple scenes like Mason going to college and emotional scenes like the mother saying goodbye are all weighted with meaning, and no scene is sloppily done. Linklater deserves this Oscar not only for the quantity of work he put in, but also for the quality of work he produced.

In what some critics are calling his “comeback” performance, Michael Keaton’s  portrayal of Riggan Thomson in “Birdman” has made him the frontrunner for Best Actor. Keaton’s character attempts to stage a comeback in his acting career by starring in a Broadway show, while also dealing with confusing hallucinations that sometimes are hard to distinguish from reality. In his portrayal of  Thomson, Keaton exhibits a wide range of emotions throughout the film from pathetic desperation to extreme anger while also managing to weave in humor. Keaton’s performance is a once in a lifetime portrayal that has been a long time coming for the experienced actor, and it seems that it would only be fair and respectful to give him the long awaited Oscar.

Next Best: Eddie Redmayne, “The Theory of Everything”

Julianne Moore’s exceptional acting in “Still Alice” is the clear choice for Best Actress. Moore plays an accomplished linguistics professor at Columbia University who is diagnosed with early-onset Alzheimer’s Disease at age 50. She and her family must adjust to her diagnosis as her condition worsens every day. Moore portrays her character’s gradual deterioration with chilling accuracy, sometimes using only her eyes and voice tones to convey her confusion of who and where she is. She leaves her dignity behind the camera in several scenes, leaving everyone feeling uncomfortable while she pees in her pants when she can’t find the bathroom and while she sits in the corner like a child as her own children discuss what to do with her. Julianne Moore never left viewers doubting what pain she was going through and experiencing throughout the film and deserves the Oscar for what might be her best performance yet.

J.K. Simmons pushes the boundaries of what role a teacher should play in a student’s success in his portrayal of Terrence Fletcher in “Whiplash.” In the film, teenager Andrew Neimann, played by Miles Teller, joins Fletcher’s band as a drummer, and soon realizes that maintaining his position will take more than just hard work. Fletcher shows his true colors when he begins to verbally and physically abuse Neimann, a teaching style Fletcher believes will help his students achieve greatness. Simmons’ terrifying performance overshadows all other roles in the film, including Teller’s performance as the main character. Just when you begin to think that Fletcher may have a warm, beating heart, Simmons strikes back with another angry tirade and cruel punishment that sends everyone pressed back against their seats.

Patricia Arquette’s portrayal of Mason’s single mother in “Boyhood” is definitely the standout performance of the film and should earn her the Best Supporting Actress award. The audience gets to see her character work so hard to provide and care for her children, always putting them first even when they seem to disregard her. And after all her blood, sweat and tears, in a scene where we expect her to revel in her success after raising two kids, we see her break down during what is definitely her Oscar winning moment. Arquette makes no attempt to glorify her role and shows us the gritty reality of being a single mother: putting everyone first but having no one put you first. Throughout the film, we watch Arquette give a shockingly realistic portrayal of a woman who never seems to have it all.