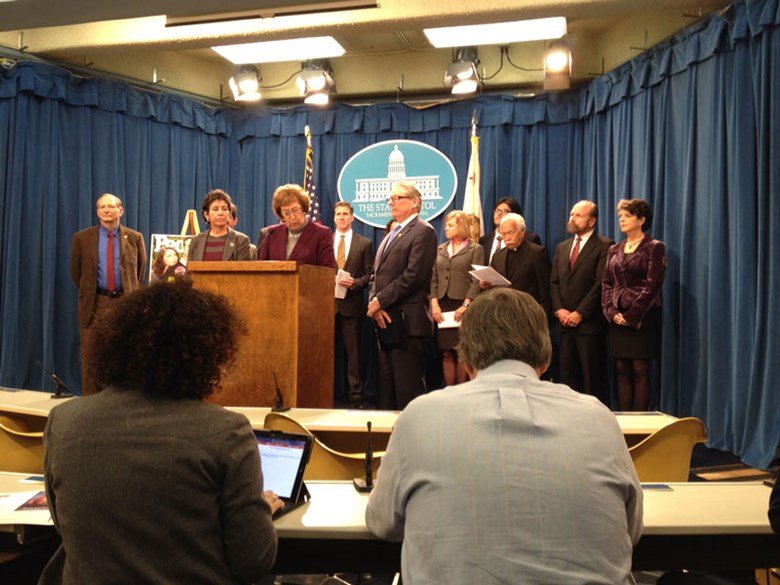 Members of the California State Senate present the new right-to-die bill in front of a public panel duirng a recent press conference at the State Capitol in Sacramento, Calif.

Terminal patients have the right to end their lives

Recently, California lawmakers have proposed a new right-to-die bill – one that would allow doctors to legally give terminally ill patients lethal doses of medications to end their lives. This new legislation touches on the controversial topic of assisted suicide, an issue which has not been discussed by the California legislature since 2007.

California’s new bill closely follows Oregon’s “death with dignity” law, a law which has had remarkable success in the past 20 years — the bill would allow a patient with a prognosis of death within six months to obtain a physician’s prescription for a lethal dose of medication.

For Californians who are terminally ill and suffering through pain, choosing their own manner of death should be an integral right.

This bill gives people full free will over their own health and bodies, and while opponents claim that assisted suicide too closely compares to committing suicide, Brittany Maynard, a 29-year-old who suffered from brain cancer and moved from her home in California to Oregon in order to end her own life, insisted that the right to end her painful suffering was not the same as suicide.
“Cancer [and not myself] is ending my life,” Maynard said to CBS News a few weeks before her death. “I am choosing to end [my life] a little sooner and in a lot less pain and suffering.”

In the United States, the pursuit of happiness and the freedom to live according to one’s own beliefs and choices are recognized as important rights for all people. Despite these fundamental rights, patients like Maynard who wish to die with dignity versus dying in prolonged pain still struggle with being able to do so. Denying terminally ill individuals their own choice to peacefully die is denying them not only their freedom of choice but also their sense of autonomy and self-determination.

Junior Tiffany Cai agrees with this sentiment, believing that California’s law should not be able to deny those who are suffering the option of dying on their own terms.

“I think it should be okay to help someone do what [he or she] wants when he or she is not capable of doing it himself or herself,” Cai said. “It’s never a good thing to encourage someone to commit suicide, but there should not be legal repercussions.”
California’s recent bill ensures that suicide is not encouraged and furthermore does not pressure patients into choosing death, which is a concern that many people have with this law. In fact, California’s law would issue a 15-day waiting period between a doctor’s agreement to prescribe life-ending medication and the patient’s choice of whether or not to take the lethal medication. Patients are encouraged to make the right decision for themselves and ought to be awarded the ability to determine their own future. Oregon’s “death with dignity” law, which has been in effect for many years, has proven to be remarkably successful for its residents.

Oregon’s success with its law not only demonstrates the benefits of legalizing assisted suicide, but also suggests that California can heavily rely on Oregon’s assisted suicide law as a template for its own legislature if passed.

In the past 20 years, Oregon’s annual reports emphasize that there has not been any abuse of the law, as well as stating that people have not been encouraged by health insurance companies to choose death over costly treatments.

With substantial proof from Oregon that the right-to-die bill is an effective and viable option for patients who are terminally ill, there is no reason to prevent Californians from making their own choices about their lives.

Sophomore Timothy Liu agrees that assisted suicide should be a legalized choice that patients can make for themselves.

“I think that assisted suicide should be an option that people are able to consider,” Liu said. “If someone is in a state in which [he or she is] incapable of enjoying certain human emotions or joys, and [he or she] feels as though life is no longer worth living, [he or she] should have the option of ending [his or her] life.”

According to Time Magazine, 91 percent of patients who seek a lethal prescription for assisted suicide do so because they feel that they are losing their autonomy over their lives. As a result, by legislating a “death with dignity” bill, California would be able to give its residents a final measure of choice and self-determination, a right which ought to belong to all citizens.