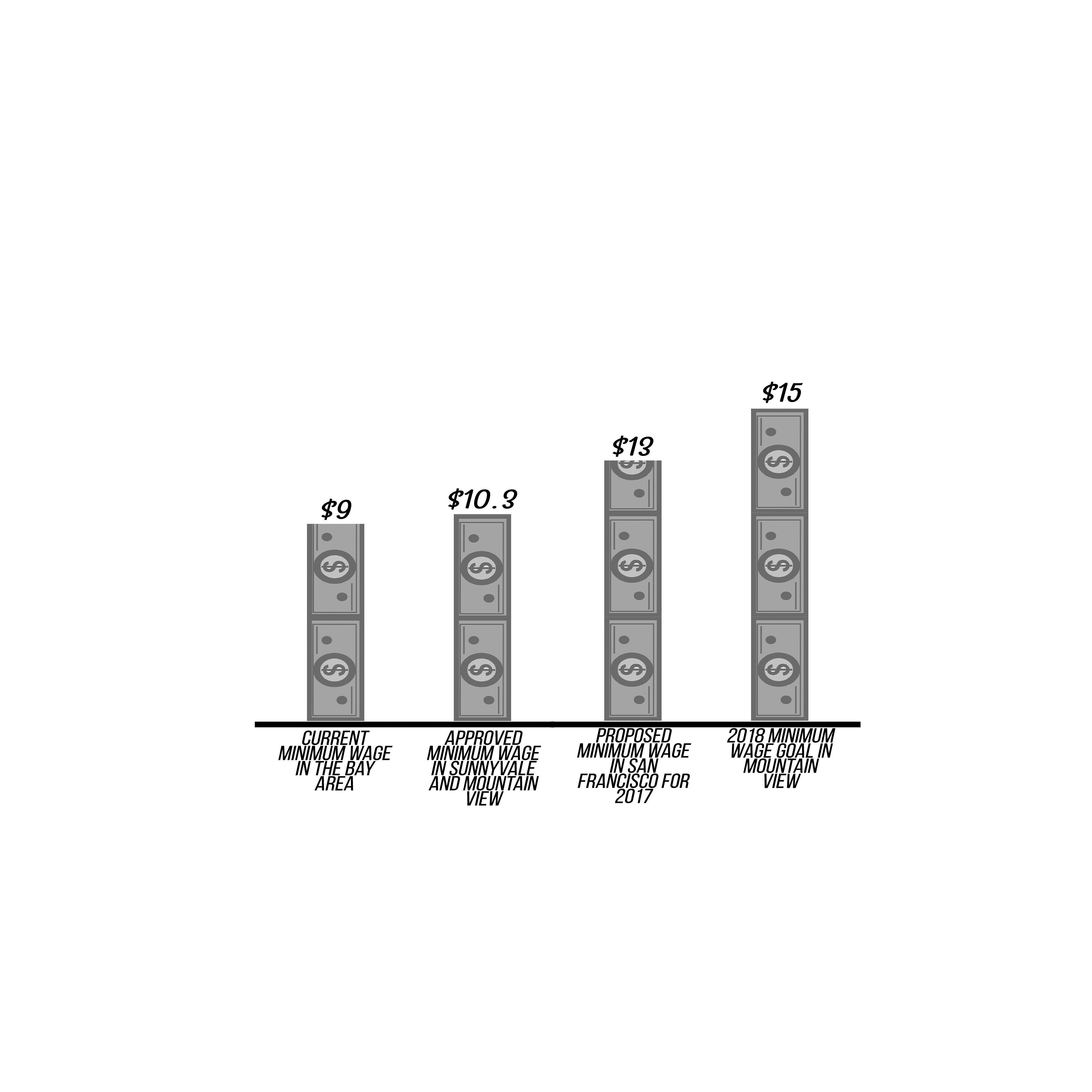 The Palo Alto City Council voted 8-0 to send a proposal to establish an increased citywide minimum wage to its Policy and Service Committee on Feb. 9. The proposal to set a higher minimum wage was suggested by councilmen Marc Berman, Pat Burt, Tom DuBois and Cory Wolbach to the rest of the council.
The statewide minimum wage is set to increase fro­­m $9 to $10 per hour in January of 2016. Despite this, Palo Alto councilmen back up their proposal for an even higher minimum wage because living expenses in Palo Alto are substantially higher than the standards in other cities in of California.
“Despite our general affluence, along with high costs of living and working in Palo Alto, we currently have the same minimum wage as low cost regions of California and lower minimum wages than some neighboring cities,” the memo states.
Carol Lamont, a single mother of four who moved to Palo Alto over 40 years ago on welfare, stresses that the issue of raising minimum wage is more than an economic matter.
“This is a moral issue,” Lamont said in an interview with the the San Jose Mercury News. “It’s way beyond an economic issue. We’re talking about survival. I urge you to take action on this and bump this wage up as high as we can.”
The councilmen add in their proposal that the purpose of the minimum wage ordinance would help serve to promote economic equality in the city.

“Our lowest wage workers perform valued services in Palo Alto and often have to work multiple jobs with long commutes to barely make ends meet,” the memo stated. “A local minimum wage would be a modest step in supporting these workers who are vital to maintaining the services we value and that are essential to our local economy.”

Councilman Eric Filseth feels that the only opposing argument to raising minimum wage would be that the raise could potentially destroy service jobs.

“[But that] doesn’t seem likely to happen in Palo Alto,” Filseth said in an interview with Palo Alto Online. “So, I think we ought to go for it.”

The passed proposal will allow for the matter to be analyzed by the Palo Alto Policy and Service Committee. The committee will then take action to propose a new and higher minimum wage, inflationary adjustments and long term goals. Lastly, the committee will develop a strategy for outreach and implementation of the new ordinance and how to deal with violations of the ordinance. The impact of the ordinance on staff and resources are anticipated to be low, as stated in the memo. The Santa Clara County Cities Association made minimum wage one of its top priorities for 2015. By passing the proposal, Palo Alto is following in the footsteps of cities such as Sunnyvale and Mountain View. These cities have detected similar issues within their communities and have taken steps to raise the minimum wage as well. Both cities have approved a minimum wage of $10.30. This change has already taken place in Sunnyvale for the 2015 year. Mountain View, who will be making this change in July, also aspires to raise their minimum wage to $15 by 2018. The councilmen hope for the Palo Alto Policy and Service Committee to use both these cities’ ordinances as models.

In hopes of raising minimum wage in Bay Area cities, San Francisco Senator Mark Leno has introduced legislation which proposes to up the state minimum wage to $13 by 2017.

“Raising incomes for millions of Californians will reduce poverty and provide them a better shot at the American Dream,” Senate President Pro Tem Kevin de Leon said in a statement. “Senator Leno’s measure will make sure this opportunity is real for all of [them].”