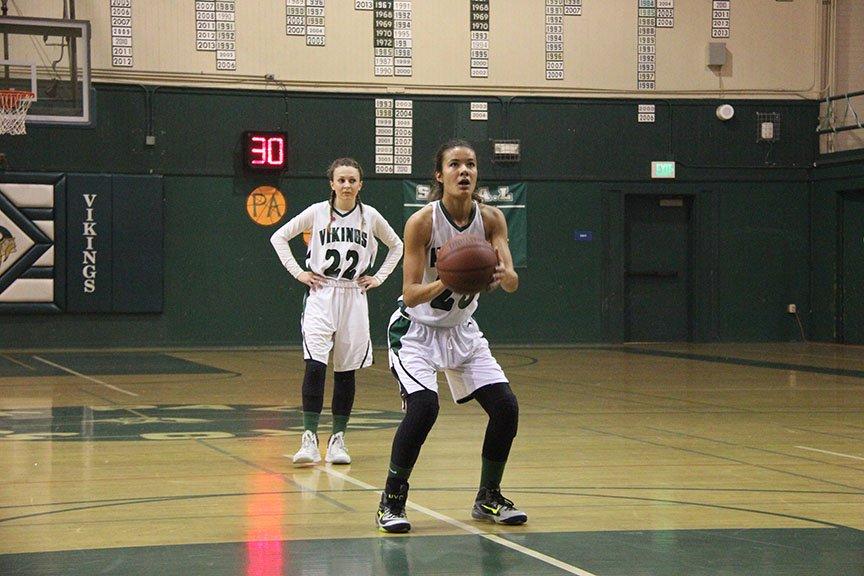 Junior Courtney Lovely shoots a free through against Los Gatos Wildcats. The Lady Vikings squeaked by with a 64-62 victory.

The Palo Alto High School girls basketball team has finished their season on top of the league leaderboard. On Feb. 18, the hosting Lady Vikes scored a tight 64-62 triumph over the Los Gatos High School Wildcats. The final records for the league season are 22-2 overall and a perfect 12-0 for league games.

“It was a game where we really had to prove the title that we had earned. We already were league champs after our game against Mountain View, but we knew this game against Los Gatos would test us both physically and mentally,” junior Skylar Burris said. “We’re a team that has learned to fight through adversity and stress, so being down nine at the start of the fourth quarter was nothing new to us. After we finished…with Maddy’s great final shot, it felt like a huge weight had been lifted off our shoulders. We’d always talked about winning league and going undefeated, but now that it’s reality, there’s no better feeling.”

The Lady Vikes were losing at the beginning of all quarters, yet prevailed with both offensive and defensive strength in the last quarter.

“During the first half of the game, we didn’t play our best defense,” sophomore Lauren Koyama said. “In the last quarter, we stepped up and were able to stop Los Gatos offensively, and were able to score more too. It was super exciting that we won on a buzzer beater, but maybe too exciting.”

Junior Maddy Atwater leads the team in assists, averaging three a game, and star shooter Koyama leads the team in baskets, making an average of 10 a game. Overall, the Lady Vikes average 52 points and 10 steals per game.

Paly is guaranteed participation in at least three games at Central Coast Sectionals, and their performance in these will determine their state championship. Their first CCS game took place on Feb. 27 against St. Ignatius High School, where they lost 63-33. On Mar. 3, the Lady Vikes went into their away game against Scotts Valley High School with high hopes of a victory, but lost 76-60.

“It was a hard loss, we went into the game expecting a lot more and when our tracks didn’t fall we definitely got down mentally,” Burris said. “We executed well on defense but we just did not pull through on offense.”

The next game will take place on Tuesday, March 10 but the opponent has not been determined. Despite the loss, the girls still have high hopes.

“We want to go all the way,” Burris said. “We want to show everyone that Paly is a force to be reckoned with.”