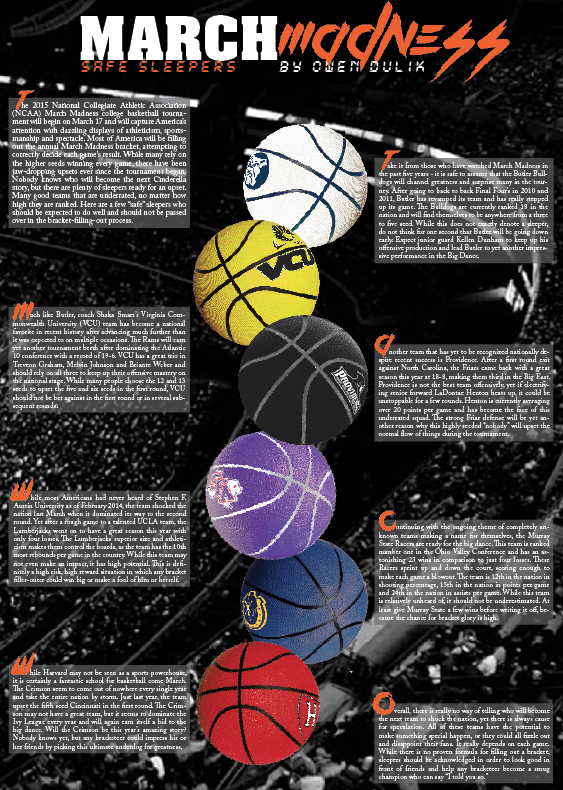 The 2015 National Collegiate Athletic Association (NCAA) March Madness college basketball tournament will begin on March 17 and will capture America’s attention with dazzling displays of athleticism, sportsmanship and spectacle. Most of America will be filling out the annual March Madness bracket, attempting to correctly decide each game’s result. While many rely on the higher seeds winning every game, there have been jaw-dropping upsets ever since the tournament began. Nobody knows who will become the next Cinderella story, but there are plenty of sleepers ready for an upset. Many good teams that are underrated, no matter how high they are ranked. Here are a few “safe” sleepers who should be expected to do well and should not be passed over in the bracket-filling-out process.

Take it from those who have watched March Madness in the past five years – it is safe to assume that the Butler Bulldogs will channel greatness and surprise many in the tourney. After going to back to back Final Four’s in 2010 and 2011, Butler has revamped its team and has really stepped up its game. The Bulldogs are currently ranked 18 in the nation and will find themselves to be anywhere from a three to five seed. While this does not exactly denote a sleeper, do not think for one second that Butler will be going down early. Expect junior guard Kellen Dunham to keep up his offensive production and lead Butler to yet another impressive performance in the Big Dance.

Much like Butler, coach Shaka Smart’s Virginia Commonwealth University (VCU) team has become a national favorite in recent history after advancing much further than it was expected to on multiple occasions. The Rams will earn yet another tournament berth after dominating the Atlantic 10 conference with a record of 19-6. VCU has a great trio in Treveon Graham, Melvin Johnson and Briante Weber and should rely on all three to keep up their offensive mastery on the national stage. While many people choose the 12 and 13 seeds to upset the five and six seeds in the first round, VCU should not be bet against in the first round or in several subsequent rounds.

Another team that has yet to be recognized nationally despite recent success is Providence. After a first round exit against North Carolina, the Friars came back with a great season this year at 18-8, making them third in the Big East. Providence is not the best team offensively, yet if electrifying senior forward LaDontae Henton heats up, it could be unstoppable for a few rounds. Henton is currently averaging over 20 points per game and has become the face of this underrated squad. The strong Friar defense will be yet another reason why this highly seeded “nobody” will upset the normal flow of things during the tournament.

While most Americans had never heard of Stephen F. Austin University as of February 2014, the team shocked the nation last March when it dominated its way to the second round. Yet after a rough game to a talented UCLA team, the Lumberjacks went on to have a great season this year with only four losses. The Lumberjacks’ superior size and athleticism makes them control the boards, as the team has the 10th most rebounds per game in the country. While this team may not even make an impact, it has high potential. This is definitely a high risk, high reward situation in which any bracket filler-outer could win big or make a fool of him or herself.

Continuing with the ongoing theme of completely unknown teams making a name for themselves, the Murray State Racers are ready for the big dance. This team is ranked number one in the Ohio Valley Conference and has an astonishing 23 wins in comparison to just four losses. These Racers sprint up and down the court, scoring enough to make each game a blowout. The team is 12th in the nation in shooting percentage, 15th in the nation in points per game and 24th in the nation in assists per game. While this team is relatively unheard of, it should not be underestimated. At least give Murray State a few wins before writing it off, because the chance for bracket glory is high.

While Harvard may not be seen as a sports powerhouse, it is certainly a fantastic school for basketball come March. The Crimson seem to come out of nowhere every single year and take the entire nation by storm. Just last year, the team upset the fifth seed Cincinnati in the first round. The Crimson may not have a great team, but it seems to dominate the Ivy League every year and will again earn itself a bid to the big dance. Will the Crimson be this year’s amazing story? Nobody knows yet, but any bracketeer could impress his or her friends by picking this ultimate underdog for greatness.

Overall, there is really no way of telling who will become the next team to shock the nation, yet there is always cause for speculation. All of these teams have the potential to make something special happen, or they could all fizzle out and disappoint their fans. It really depends on each game. While there is no proven formula for filling out a bracket, sleepers should be acknowledged in order to look good in front of friends and help any bracketeer become a smug champion who can say “I told you so.”