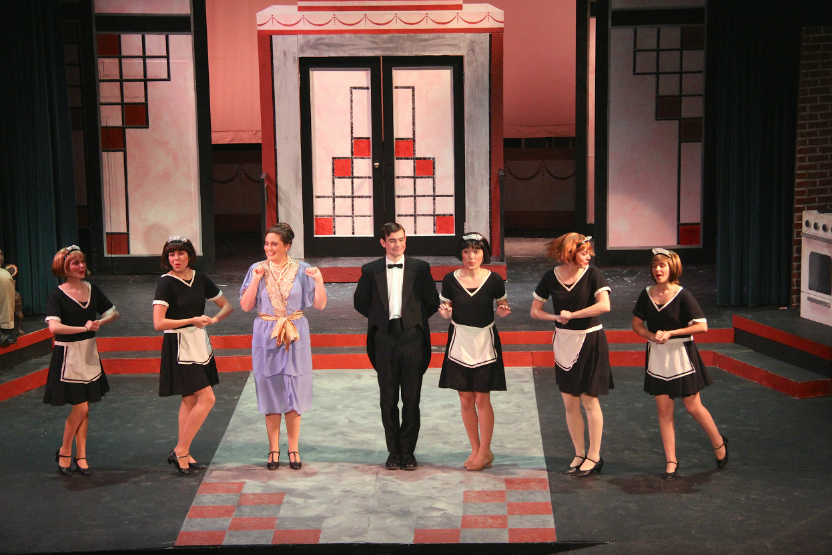 The cast of “The Drowsy Chaperone” performs a dress rehersal to prepare for it’s first show for the public, set to open March 6.

There have been two early showings of “The Drowsy Chaperone” —  one that was held for the press on Feb. 23, and one presented as a free preview,  targeted towards middle school students on March 5.

According to Assistant Director and senior Hannah Nguyen, the publicity visit went well. There was a level of coverage Paly Theatre had not had previously. Nguyen also commented on how the preparations for the show have gone.

“The songs and dances are looking really great,” Nguyen said. “We have started working with the student orchestra, and the show is coming together very nicely.”

According to Nguyen, the show contains humor that will appeal to all young adults.

“It’s a really entertaining comedy and anyone who comes is guaranteed to laugh,” Nguyen said.

Tickets are currently on sale online for all the showings of “The Drowsy Chaperone.”

Paly Theatre is also preparing for several festivals many students will be attending in the coming months. Seniors Nguyen and Cara Kienitz, junior Sophie Swezey and sophomore Joelle Dong plan to participate in California Youth in Theatre, an event on March 16 and 17 in which students gather in Sacramento to perform for California legislators and explain the importance of theater education.

“I’m really looking forward to [California Youth in Theatre] because I feel like emphasis on the importance of the arts, theatre in particular, is often neglected in a world that’s trying to train engineers and mathematicians,” Nguyen said. “This is a day where we get to show them why theatre is important to us, and  why it should be taken seriously in high school education.”

From March 27 to 29, 20 to 30 of Paly’s theater students will be attending the California State Thespian Festival in Upland, Calif. The conference lasts three days and features performances as well as technical workshops.

“It’s a really high-energy environment and being surrounded by 1,000 other theatre kids for an entire weekend is an experience like no other,” Nguyen said.

Other upcoming events in theater include One Act auditions in the first week of April and the Oregon Shakespeare Festival in Ashland, Ore. from April 23 to 26.