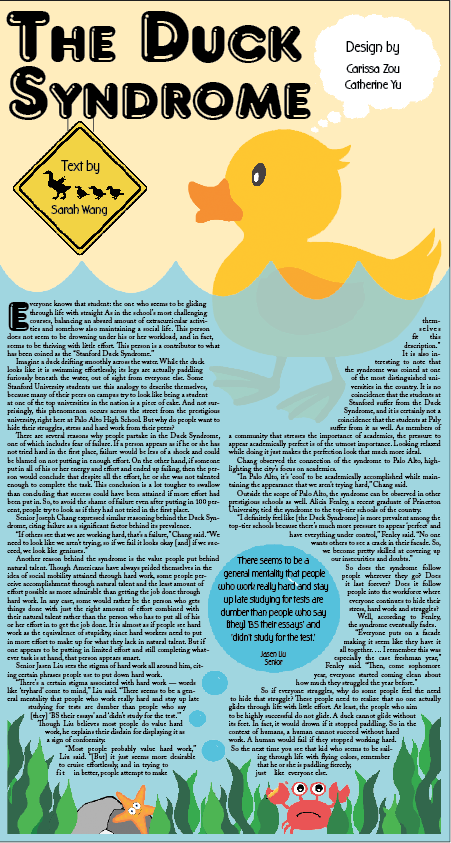 Everyone knows that student: the one who seems to be gliding through life with straight As in the school’s most challenging courses, balancing an absurd amount of extracurricular activities and somehow also maintaining a social life. This person does not seem to be drowning under his or her workload, and in fact, seems to be thriving with little effort. This person is a contributor to what has been coined as the “Stanford Duck Syndrome.”

Imagine a duck drifting smoothly across the water. While the duck looks like it is swimming effortlessly, its legs are actually paddling furiously beneath the water, out of sight from everyone else. Some Stanford University students use this analogy to describe themselves, because many of their peers on campus try to look like being a student at one of the top universities in the nation is a piece of cake. And not surprisingly, this phenomenon occurs across the street from the prestigious university, right here at Palo Alto High School. But why do people want to hide their struggles, stress and hard work from their peers?

There are several reasons why people partake in the Duck Syndrome, one of which includes fear of failure. If a person appears as if he or she has not tried hard in the first place, failure would be less of a shock and could be blamed on not putting in enough effort. On the other hand, if someone put in all of his or her energy and effort and ended up failing, then the person would conclude that despite all the effort, he or she was not talented enough to complete the task. This conclusion is a lot tougher to swallow than concluding that success could have been attained if more effort had been put in. So, to avoid the shame of failure even after putting in 100 percent, people try to look as if they had not tried in the first place.
Senior Joseph Chang expressed similar reasoning behind the Duck Syndrome, citing failure as a significant factor behind its prevalence.

“If others see that we are working hard, that’s a failure,” Chang said. “We need to look like we aren’t trying, so if we fail it looks okay [and] if we succeed, we look like geniuses.”

Another reason behind the syndrome is the value people put behind natural talent. Though Americans have always prided themselves in the idea of social mobility attained through hard work, some people perceive accomplishment through natural talent and the least amount of effort possible as more admirable than getting the job done through hard work. In any case, some would rather be the person who gets things done with just the right amount of effort combined with their natural talent rather than the person who has to put all of his or her effort in to get the job done. It is almost as if people see hard work as the equivalence of stupidity, since hard workers need to put in more effort to make up for what they lack in natural talent. But if one appears to be putting in limited effort and still completing whatever task is at hand, that person appears smart.

Senior Jasen Liu sees the stigma of hard work all around him, citing certain phrases people use to put down hard work.

“There’s a certain stigma associated with hard work — words like ‘tryhard’ come to mind,” Liu said. “There seems to be a general mentality that people who work really hard and stay up late studying for tests are dumber than people who say [they] ‘BS their essays’ and ‘didn’t study for the test.’”
Though Liu believes most people do value hard work, he explains their disdain for displaying it as a sign of conformity.

“Most people probably value hard work,” Liu said. “[But] it just seems more desirable to cruise effortlessly, and in trying to fit in better, people attempt to make themselves fit this description.”

It is also interesting to note that the syndrome was coined at one of the most distinguished universities in the country. It is no coincidence that the students at Stanford suffer from the Duck Syndrome, and it is certainly not a coincidence that the students at Paly suffer from it as well. As members of a community that stresses the importance of academics, the pressure to appear academically perfect is of the utmost importance. Looking relaxed while doing it just makes the perfection look that much more ideal.
Chang observed the connection of the syndrome to Palo Alto, highlighting the city’s focus on academics.

“In Palo Alto, it’s ‘cool’ to be academically accomplished while maintaining the appearance that we aren’t trying hard,” Chang said.

Outside the scope of Palo Alto, the syndrome can be observed in other prestigious schools as well. Alicia Fenley, a recent graduate of Princeton University, tied the syndrome to the top-tier schools of the country.

“I definitely feel like [the Duck Syndrome] is more prevalent among the top-tier schools because there’s much more pressure to appear ‘perfect’ and have everything under control,” Fenley said. “No one wants others to see a crack in their facade. So, we become pretty skilled at covering up our insecurities and doubts.”

So does the syndrome follow people wherever they go? Does it last forever? Does it follow people into the workforce where everyone continues to hide their stress, hard work and struggles?

Well, according to Fenley, the syndrome eventually fades.

“Everyone puts on a facade making it seem like they have it all together. … I remember this was especially the case freshman year,” Fenley said. “Then, come sophomore year, everyone started coming clean about how much they struggled the year before.”

So if everyone struggles, why do some people feel the need to hide that struggle? These people need to realize that no one actually glides through life with little effort. At least, the people who aim to be highly successful do not glide. A duck cannot glide without its feet. In fact, it would drown if it stopped paddling. So in the context of humans, a human cannot succeed without hard work. A human would fail if they stopped working hard.

So the next time you see that kid who seems to be sailing through life with flying colors, remember that he or she is paddling fiercely, just like everyone else.