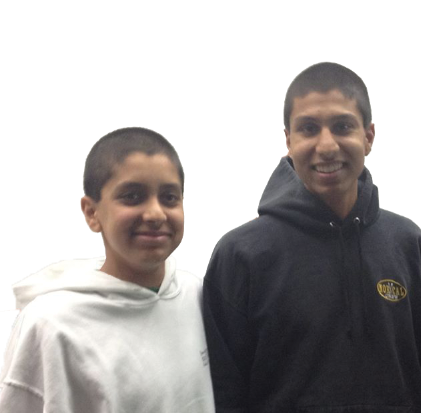 Jaisel Sandhu (BJS): Well, I’d say that nothing captures my essence as well as the word ‘moist’, and I think the word ‘hooligan’ best describes my brother.

TC: What words would you use Jaiveer?

Jaiveer Sandhu (LJS): I would say ‘fly’ for myself and ‘embarrassment’ for my brother.

TC: So, Jaisel, will you be handing over the reigns of Even-Period-Weatherman-In-Chief to Jaiveer next year?

BJS: We’ll see, we’ll see, I don’t think he has what it takes. There really isn’t any substitute for raw talent in weather-casting.

TC: Now, Jaiveer, the question on the tip of everyone’s tongues: do you think Claire’s asking would even have had a chance at succeeded without your solo?

LJS: I mean, honestly, I’m surprised Claire didn’t just change her mind and ask me after that solo.

TC: I think we’re all a little surprised.

LJS: Yeah, I gotta say that I’m done with prom askings for this year. I don’t want to end up hijacking an asking after coming so close with this last one.

TC: How did you feel about your brother’s performance, Jaisel?

BJS: I think that Lil’ J really broke it down out there on the quad, but let’s not forget who he learned all those moves from.

LJS: Jaisel, you suck at dancing. You can’t even dance.

TC: Can you tell us about the balance of power within the Sandhu residence?

BJS: I wouldn’t say that there is even a balance of power since I hold it all. It’s pretty clear that I am the dominant male within the Sandhu household.

LJS: As if. I run this family.

TC: Jaisel, would you say that sophomore Clay Watson is even more of a younger brother to you than Jaiveer?

BJS: Yes and no, Clay is more like a son-in-law.

LJS: Don’t talk in that tone.

TC: Any shout-outs you’d like to give, seeing as you’ll be graduating this year Jaisel?

TC: What about you Jaiveer?

LJS: Shout out everyone who voted Jaiveer. Your support is appreciated.

TC: Now, Jaisel, I’ve got to ask about the mindset behind the rigorous bulk-up plan you’ve been undertaking, and whether Jaiveer will be doing something in the future?

BJS: It’s a philosophy really: eat big, get big. I don’t think there’s any hope for Jaiveer getting any kind of gains at this point though.

LJS: Only because I’ve maxed out my gains already.

TC: Jaiveer, how would you say you’ve adjusted in your first year at Paly?

LJS: I think the better question would be how has Paly adjusted to me?