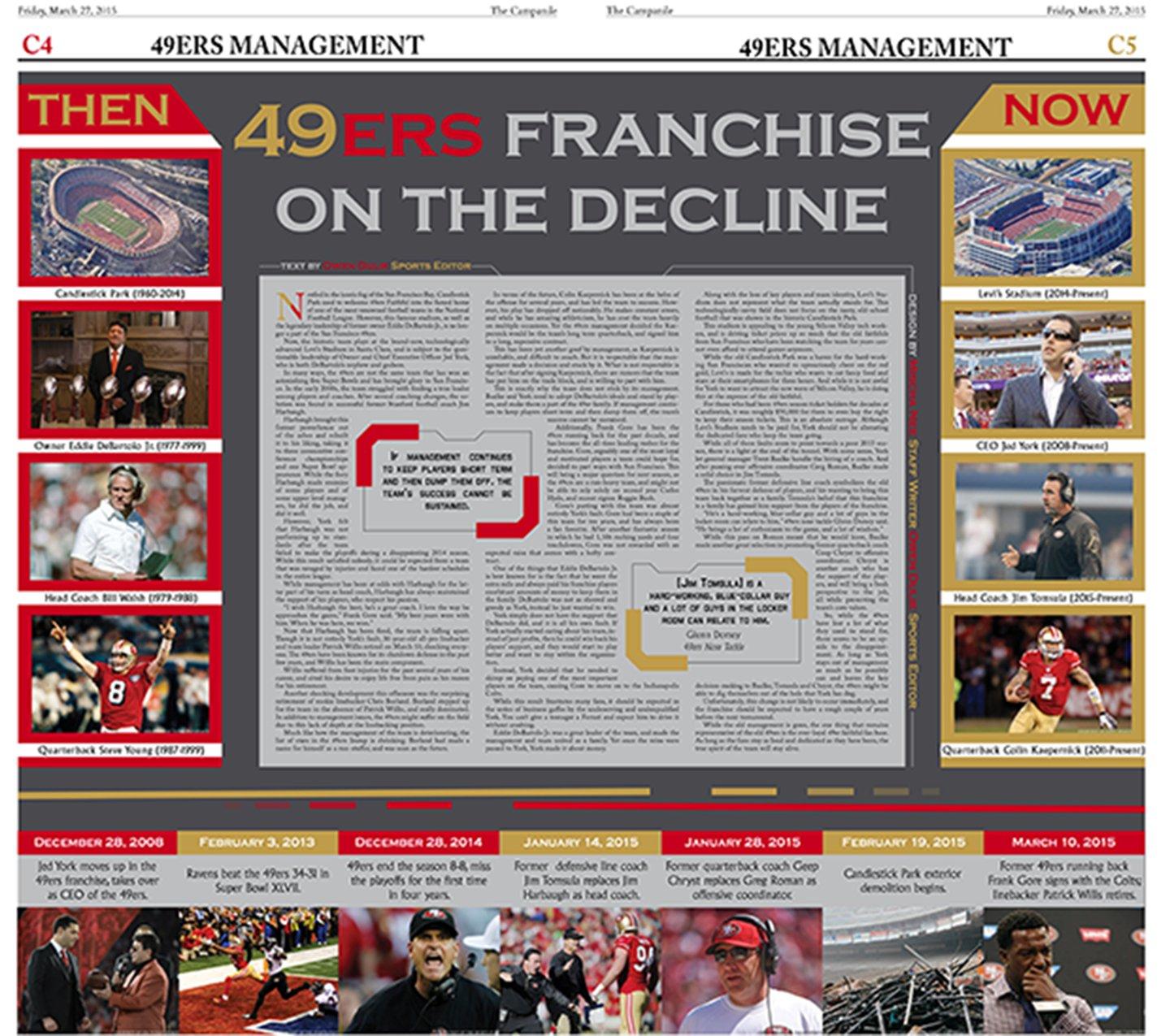 49ers Franchise on the decline

Nestled in the iconic fog of the San Francisco Bay, Candlestick Park used to welcome 49ers Faithful into the famed home of one of the most renowned football teams in the National Football League. However, this famous stadium, as well as the legendary leadership of former owner Eddie DeBartolo Jr., is no longer a part of the San Francisco 49ers.

Now, the historic team plays at the brand-new, technologically advanced Levi’s Stadium in Santa Clara, and is subject to the questionable leadership of Owner and Chief Executive Officer Jed York, who is both DeBartolo’s nephew and godson.

In many ways, the 49ers are not the same team that has won an astonishing five Super Bowls and has brought glory to San Francisco. In the early 2000s, the team struggled with finding a true leader among players and coaches. After several coaching changes, the solution was found in successful former Stanford football coach Jim Harbaugh.

Harbaugh brought this former powerhouse out of the ashes and rebuilt it to his liking, taking it to three consecutive conference championships  and one Super Bowl appearance. While the fiery Harbaugh made enemies of some players and of some upper level managers, he did the job, and did it well.

However, York felt that Harbaugh was not performing up to standards after the team failed to make the playoffs during a disappointing 2014 season. While this result satisfied nobody, it could be expected from a team that was ravaged by injuries and faced one of the hardest schedules in the entire league.

While management has been at odds with Harbaugh for the latter part of his term as head coach, Harbaugh has always maintained the support of his players, who respect his passion.

“I wish Harbaugh the best; he’s a great coach. I love the way he approaches the game,” Frank Gore said. “My best years were with him. When he was here, we won.”

Now that Harbaugh has been fired, the team is falling apart. Though it is not entirely York’s fault, 30-year-old all-pro linebacker and team leader Patrick Willis retired on March 10, shocking everyone. The 49ers have been known for its shutdown defense in the past few years, and Willis has been the main component.

Willis suffered from foot injuries for the past several years of his career, and cited his desire to enjoy life free from pain as his reason for his retirement.

Another shocking development this offseason was the surprising retirement of rookie linebacker Chris Borland. Borland stepped up for the team in the absence of Patrick Willis, and really dominated. In addition to management issues, the 49ers might suffer on the field due to this lack of depth at the linebacking position.

Much like how the management of the team is deteriorating, the list of stars in the 49ers lineup is shrinking. Borland had made a name for himself as a run-stuffer, and was seen as the future.

In terms of the future, Colin Kaepernick has been at the helm of the offense for several years, and has led the team to success. However, his play has dropped off noticeably. He makes constant errors, and while he has amazing athleticism, he has cost the team heavily on multiple occasions. Yet the 49ers management decided the Kaepernick would be the team’s long term quarterback, and signed him to a long, expensive contract.

This has been yet another goof by management, as Kaepernick is unreliable, and difficult to coach. But it is respectable that the management made a decision and stuck by it. What is not respectable is the fact that after signing Kaepernick, there are rumors that the team has put him on the trade block, and is willing to part with him.

This is exactly why the team does not stick by its management. Baalke and York need to adopt DeBartolo’s ideals and stand by players, and make them a part of the 49er family. If management continues to keep players short term and then dump them off, the team’s success cannot be sustained.

Additionally, Frank Gore has been the 49ers running back for the past decade, and has become the all-time leading rusher for the franchise. Gore, arguably one of the most loyal and motivated players a team could hope for, decided to part ways with San Francisco. This will bring a major question for next season, as the 49ers are a run-heavy team, and might not be able to rely solely on second year Carlos Hyde, and recent signee Reggie Bush.

Gore’s parting with the team was almost entirely York’s fault. Gore had been a staple of this team for ten years, and has always been a fan favorite. After another fantastic season in which he had 1,106 rushing yards and four touchdowns, Gore was not rewarded with an expected raise that comes with a hefty contract.

One of the things that Eddie DeBartolo Jr. is best known for is the fact that he went the extra mile and always paid his franchise players exorbitant amounts of money to keep them in the family. DeBartolo was not as shrewd and greedy as York, instead he just wanted to win.

York simply does not have the support that DeBartolo did, and it is all his own fault. If York actually started caring about his team, instead of just profits, then he could win back his players’ support, and they would start to play better and want to stay within the organization.

Instead, York decided that he needed to skimp on paying one of the most important players on the team, causing Gore to move on to the Indianapolis Colts.

While this result frustrates many fans, it should be expected in the series of business gaffes by the undeserving and underqualified York. You can’t give a teenager a Ferrari and expect him to drive it without crashing.

Eddie DeBartolo Jr. was a great leader of the team, and made the management and team united as a family. Yet once the reins were passed to York, York made it about money.

Along with the loss of key players and team identity, Levi’s Stadium does not represent what the team actually stands for. This technologically-savvy field does not focus on the nasty, old-school football that was shown in the historic Candlestick Park.

This stadium is appealing to the young Silicon Valley tech workers, and is driving ticket prices up so much that the old faithfuls from San Francisco who have been watching the team for years cannot even afford to attend games anymore.

While the old Candlestick Park was a haven for the hard-working San Franciscan who wanted to uproariously cheer on the red gold, Levi’s is made for the techie who wants to eat fancy food and stare at their smartphones for three hours. And while it is not awful for York to want to attract the new wave of Silicon Valley, he is doing this at the expense of the old faithful.

For those who had been 49ers season ticket holders for decades at Candlestick, it was roughly $50,000 for them to even buy the right to keep their season tickets. This is an absolute outrage. Although Levi’s Stadium needs to be paid for, York should not be alienating the dedicated fans who keep the team going.

While all of these faults seem to point towards a poor 2015 season, there is a light at the end of the tunnel. With some sense, York let general manager Trent Baalke handle the hiring of a coach. And after passing over offensive coordinator Greg Roman, Baalke made a solid choice in Jim Tomsula.

The passionate former defensive line coach symbolizes the old 49ers in his fervent defense of players, and his wanting to bring this team back together as a family. Tomsula’s belief that this franchise is a family has gained him support from the players of the franchise.

“He’s a hard-working, blue-collar guy and a lot of guys in the locker room can relate to him,” 49ers nose tackle Glenn Dorsey said.  “He brings a lot of enthusiasm to the game, and a lot of wisdom.”

While this pass on Roman meant that he would leave, Baalke made another great selection in promoting former quarterback coach Geep Chryst to offensive coordinator. Chryst is another coach who has the support of the players, and will bring a fresh perspective to the job, all while preserving the team’s core values.

So, while the 49ers have lost a lot of what they used to stand for, there seems to be an upside to the disappointment. As long as York stays out of management as much as he possibly can and leaves the key decision-making to Baalke, Tomsula and Chryst, the 49ers might be able to dig themselves out of the hole that York has dug.

Unfortunately, this change is not likely to occur immediately, and the franchise should be expected to have a rough couple of years before the next turnaround.

While the old management is gone, the one thing that remains representative of the old 49ers is the ever-loyal 49er faithful fan base. As long as the fans stay as loud and dedicated as they have been, the true spirit of the team will stay alive.