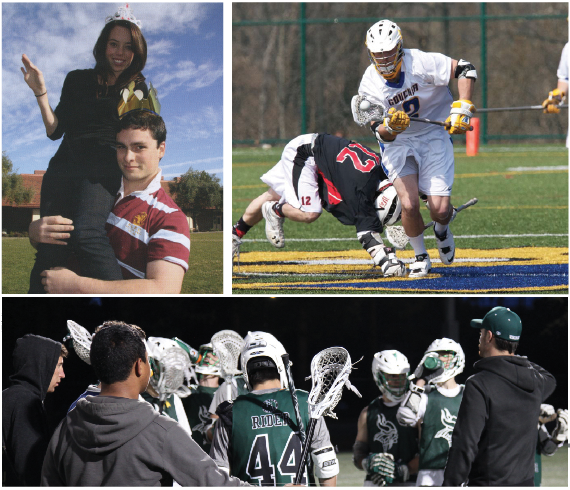 Left: Shelton is recognized as the “Biggest Drama King” in the 2008 edition of the Paly Madrono. Right: During his time at Goucher College, Shelton drives down the field after a winning face-off during a lacrosse match. Bottom: Paly’s lacrosse coach D.j. Shelton talks to the boys varsity team during practice, as the boys take a water break. Shelton has been coaching at Paly, the high school he graduated from in 2008, since the 2014 lacrosse season.

A coach’s love for lacrosse and his high school

Fuschia argyle socks finish off his obviously well planned outfit, and a half full Peet’s iced coffee sits on the table of his office in the social studies department. Although D.j. Shelton may have studied international relations and history in college, his true calling was found early in the sport of lacrosse.

Shelton, or “Djeezus” as the Palo Alto High School varsity boys lacrosse team calls him, graduated from Paly in 2008 and went on to play lacrosse for Goucher College, a small liberal arts school in Baltimore, Md.

“Going to college was a very humbling experience, because I went from being one of the better kids on the team and winning the state championship to going back east and being on the bottom of the ladder for two straight years,” Shelton said.

Shelton was not just known to the Paly student body and faculty as a stellar athlete but also as a kid with quite a vivacious personality. Upon graduating, Shelton won “Biggest Drama King” and was an honorable mention for “Biggest Gossip” in his class senior polls.

Shelton never played lacrosse as a Viking because the boys lacrosse program began after he graduated. Rather, he played for the Tomahawks Lacrosse Club, one of the most prominent clubs in the Bay Area. He coached for the Tomahawks his high school senior year and at Mountain View High School after college. Along with coaching the varsity team at Paly, Shelton is now the head coach of the NorCal Platinum team.

“Some things about Paly are literally the exact same as when I attended,” Shelton said. “I walk through the quad to the office and students are sitting in the exact same place, it’s kind of eerie actually. The physical parts of campus have changed, but otherwise, it is so similar. Unless you go to a really large school for college, I don’t think you will ever experience the same level of school spirit as there is at Paly.”

Shelton describes his coaching style as intense and tries to infuse as much energy into practices as he can.

“I would never say I am laid back, but I never belittle my players,” Shelton said.

He tells the boys, “Don’t ever listen to the tone of my voice but rather what I am saying.”

Shelton is working on strengthening the team’s coherence and dynamic, as well as developing all the players’ skills.

“I have to take a step back from the X’s and O’s of strategy, because the tools needed to implement the strategy are not solidified yet,” Shelton said.

Although Shelton may nearly perfectly embody the “lax bro” aesthetic with his brightly colored shorts and boat shoes, he has grown to despise the term. Despite thinking it was funny in high school and being characterized as a “lax bro” while he played in California, where the sport had not yet reached popularity, once he got to the east coast, everyone referred to him as a “Cali bro” solely because he wore flip flops instead of boat shoes.

“That term is such a perpetuation of the upper middle class white population that plays lacrosse,” Shelton said. “I think the overall outreach of the sport has developed tremendously, but if you look at the top tier schools — Syracuse University, John Hopkins University and Georgetown University — there won’t be any kids of color playing.”

Lacrosse originated as a tribal game played by the Iroquois Native Americans. However, the sport was extensively modified by European immigrants who made it exclusively available for white people. According to Shelton, the evolution of lacrosse has made it develop into a “prep boy” sport.

“I was a junior at Paly when the Duke University rape case happened, and people thought it was acceptable to jokingly call me a rapist just because I played lacrosse,” Shelton said. “Lax bro culture perpetuates things like that, which kids [high schoolers] that age aren’t really capable of understanding yet. Football is going through the same thing right now in terms of negative publicity: safety issues of concussions and the domestic abuse cases. We’re finding that there are elements of culture related to sports that aren’t good, when it comes to a violent sport like football, you can’t act shocked when a player acts violent off the field. When it comes to lacrosse, its not a reflection of how the game is played, it’s a reflection of how the players band together, and that exclusivity continues the segregation of the sport.”

Although Shelton says he can not control what the boys on the team do outside of practices, he tries his best to set a high standard of conduct for the team to follow.

Shelton attributes his extremely diligent work ethic to a set of skills he developed through his time playing in college. Originally falling in love with the sport in fifth grade after receiving his own stick, Shelton now brings not only his appreciation for lacrosse, but also his devotion to education, in order to give the Paly boys their best experience with lacrosse possible.

“Over the long term I’m a better coach than player,” Shelton said. “I always played specialized positions in lacrosse, I’ve never been the most athletic kid, I have good hand-eye coordination and a good sense of the field.”