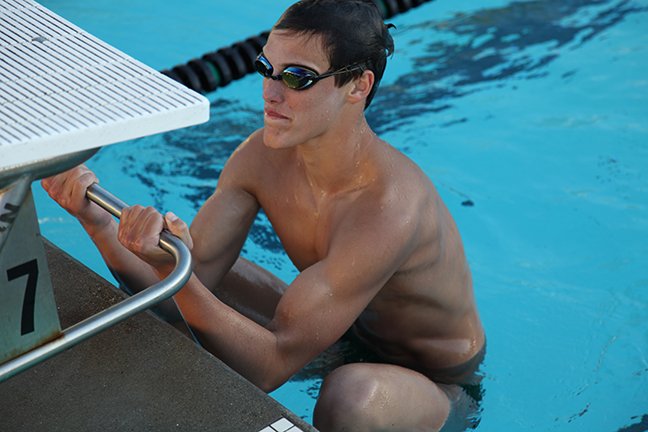 Sophomore Tommy Smale gets ready on the block to prepare for the meet on Friday. The boys team is looking to avenge a loss to Gunn High School earlier in the season.

The boys swim team had a nail-biting victory recently at its last match against Homestead High School on March 20.

The boys swim team has started their season strong and are looking forward to beating Henry M. Gunn High School after an unfortunate loss earlier in the season, according to junior Kevin Bowers.

“The team did well,” Bowers said. “It was close though, which we didn’t want, but we did pull off the win. I think we’re just looking to beat Gunn at leagues and that’s basically our main goal.”

The team wants to eventually be at top of the Santa Clara Valley Athletic League (SCVAL) league and go to league championships to get revenge against Gunn as well as hopefully moving on to Central Coast Sections (CCS).

Both Bowers and Varsity Coach Danny Dye believe that the team must work on its fundamentals to be ready for its next match against Monta Vista High School.

“Right now they’re just working on their base training,” Dye said. “It’s just kind of a short season, so they’re putting in some yardage right now; trying to build up some some toxins, in the muscles so that they can have a good taper at the end of the year.”

Bowers thinks that each swimmer must work hard in their events so that they can divide and conquer at their next match.

“[Improvement] differentiates for each person,” Bowers said. “I know that distance is trying to improve their time specifically, and they’re not doing as hot as they were early in the season — but that’s alright we have a lot of time.”

The team’s eventual goal is to beat Gunn at the league tournament at the end of the season.

Its next match is against Monta Vista, and Dye expects another close match between the two  teams.

“It’s going to be a close one,” Dye said. “It’s all going to depend on how the guys feel that day. How much they want it and how hard they’re willing to try.”

Dye currently remains neutral on the topic of victory because he is unsure if the team feels prepared enough for the tough competition next week.

However, Bowers is confident in the boys swim team’s ability to pull our a win for Palo Alto High School.

“I think we’re gonna win it,” Bowers said. “We’re going to try switching up the races, maybe try to put some new people in some different kinds of races and see how it goes from there.”

Bowers feels confident that the boys team will have a positive reaction to the new change of events for the upcoming races.

Mixing up what events the boys usually do could potentially be the answer to defeating Monta Vista in their next meet, according to Bowers.

“We could possibly move some people around because it’s still early enough to try it out so we’ll just have to see how it goes,” Bowers said.

The boys swim team is sure to provide a great match to watch against MontaVista on Friday, March 27.