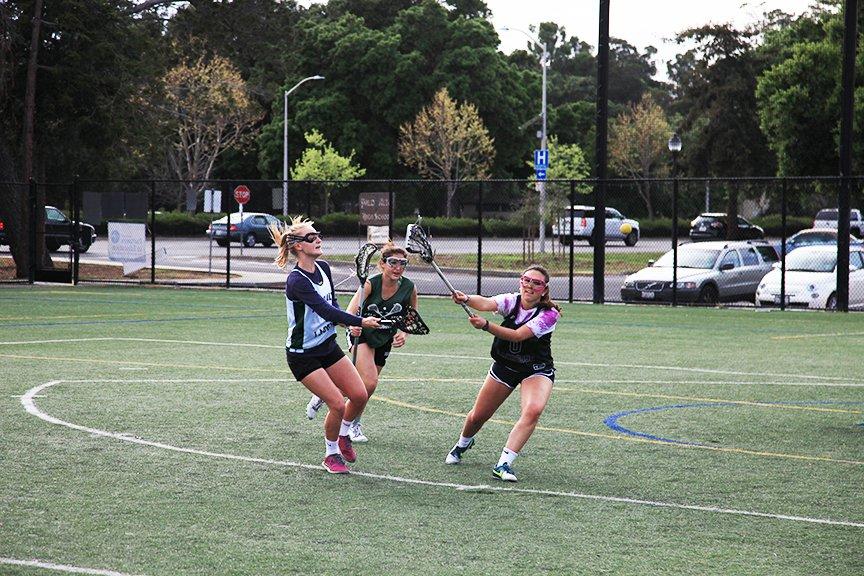 Girls lacrosse off to good start

Palo Alto High School girls varsity lacrosse team has started off its season with a 6-1 record. The team’s first game was on Feb. 27 in which it competed against the Burlingame  High School Panthers and won 12-2.

On March 12, the team faced off against Henry M. Gunn High School and defeated the cross town rivals 9-5. Paly outscored Gunn 4-2 in the first half and 5-3 in the second half. The game featured goals from seniors Paige Bara, Allie Peery, Claire Chevallier, Lisa Rogge and junior Maya Benatar. Paly’s goalkeeper, junior Meredith Kinnaman, made seven saves against the Titan offense.

The Lady Vikes were defeated by St. Francis Catholic High School on March 14., ending their initial 4-0 winning streak. After the upsetting lost against St. Francis, the team won against Los Gatos High School 20-8.

According to junior Kylie Callan, there are many reasons for the team’s success so far this season.

“Everyone on the team is very supportive of one another while also pushing each other to improve and play their best, which just creates a good atmosphere,” Callan said.  “Also, everyone is enthusiastic about the sport and shows up every day ready to give 100 percent, whether it’s a game or just a practice.”

Even though the girls varsity lacrosse team is off to a great start, there is still room for improvement.

“When we face teams that aren’t as good, we can play down to their level and make games be closer than they should be,” Callan said.

The Paly girls varsity lacrosse team ended last season with a Santa Clara Valley Athletic League (SCVAL) division title, and this year the team hopes to have a similar outcome.

“So far we’re undefeated in league, so we hope to continue with that success and hopefully win SCVALs at the end of the season,” Callan said. “Unfortunately there’s no CCS [Central Coastal Sections] playoffs for girls lacrosse, so we can’t win anything division-wise, just league.”

The girls varsity lacrosse team’s next game will be on March 27 against Pioneer High School, and will begin at 5:30 p.m.