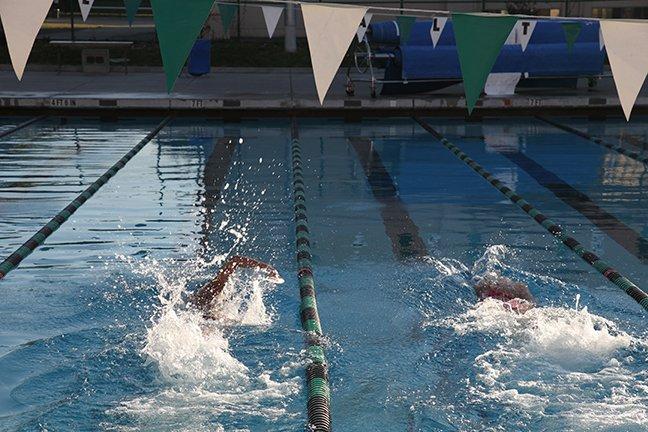 Palo Alto High School’s girls swimming and diving team began its season with an easy win at its first meet of the year.

The dual meet was on March 12 at Henry M. Gunn High School and the Paly Spring Invite resulted in a second place medal on March 6 and 7.

The meet on March 20 against Homestead High School ended with a win for the girls swimming and diving team.

“I think everyone is playing a part in meets and I think that’s really good,” junior swim captain Katie Francis said. “Everyone’s doing really well, especially this early in the season. We have a lot of really good freshmen and sophomores coming in, so we have a very young group, and that’s really cool to see.”

Although the team peformed exceptionally well during the last meet, each team member recognizes that there is more to work on in order to continue their wins.

“It is definitely different for each  and every swimmer because we all have our own individual weaknesses and strengths, but collectively we are focusing a lot on our turns and breakouts,” sophomore varsity swimmer Catherine Passarello said.

The girls varsity swim team has been working hard through each of its daily afterschool practices, along with a maximum of three morning practices.

Girls varsity swim and dive coach Danny Dye hopes for the team to define the techniques of its strokes and prepare for racing during practices.

The team hopes to improve its ability to work well as a team and creating a dynamic between the team members by focusing on creating friendships and doing activities outside of practice.

“We’re working on bonding, getting to know each other and trusting each other,” Francis said.

The varsity diving team has also begun the season successfully with a win against Homestead on March 19. It hopes to continue to improve on uniformity of its dives so it can get a higher accumulative score.

“We’re really trying to keep our dives consistent and trying to improve our degrees of difficulty,” Sophmore diver Emma van der Veen said. “So hopefully we’ll all be able to place at CCS this year and contribute to the team,”

The girls varsity swimming and diving teams have won or received second place in all of their meets.

“They have been doing well. The girls are young so they’ve been kind of getting used to the training and learning how to work in races,” Dye said. “They are competitors and they’re working really hard, so I’m proud of them.”

Girls swim and dive teams will compete in the St. Francis Yamamoto Invitational on Saturday, March 28.