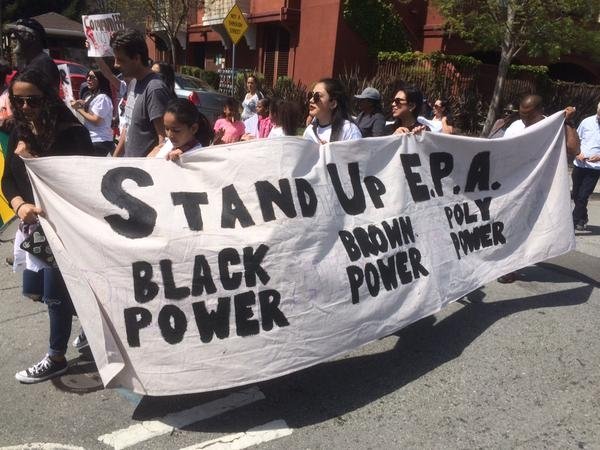 Residents march towards the East Palo Alto City Hall in a rally against gentrification.

In order to unite and build a stronger coalition of families throughout East Palo Alto (EPA), the city’s residents marched to City Hall in mid-April to protest the gentrification of EPA’s low-income areas and to raise awareness about this growing problem in EPA.

Gentrification, which is urban renewal that replaces low-income families with upper or middle-class residents, has been an increasing threat to East Palo Altans for many years — but this month, the city’s residents finally decided to take a stance against this rising issue in EPA.

Stand Up EPA, coined as the name of the residents’ recent rally against gentrification, aimed to bring together all EPA citizens — no matter their age, race or ethnicity. Ultimately, this coalition of residents and citizens hopes to collaborate upon common, positive goals and inspire the rest of EPA’s community to protest against important issues to create its own future.

Currently, EPA residents are facing the pressure of gentrification, a problem which many surrounding communities such as San Francisco and Oakland are also facing, due to the exponential rise in housing costs throughout the Bay Area. These rising costs of living in neighboring cities are likely to pressure property owners in EPA to also increase housing prices in their own community. Eventually, this would force low-income residents to move out of homes and ultimately allow higher-income families to occupy these areas.

According to EPA city Councilman Ruben Abrica, 70 percent of the city’s low-income housing currently lies in the hands of one corporate landlord — meaning that gentrification is very possible and very likely.

While the rally mainly consisted of adults, Stand Up EPA also incorporated younger residents from EPA. Students from Cesar Chavez Elementary School contributed to the community’s protest against gentrification by stenciling shirts with unification messages and helping create banners which were used throughout the march to City Hall.

Palo Alto High School sophomore Daniel Li believes that this proactiveness shown by EPA’s community is both impressive and necessary for combating other important issues in the future.

“I think it’s really cool that students — even elementary school kids — are involving themselves in these protests and rallies in East Palo Alto,” Li said. “By becoming involved this early in their lives, it’ll definitely teach them to have their voices be heard in the future, which will help them and their communities.”

The organizers of the march, nonprofit Live in Peace, called the event a “visible symbol of the beauty and power of East Palo Alto.” The organization works to empower the city’s youth and to build a stronger, more united community through classes, creative endeavors and peer support. In the future, this coalition of residents in EPA hopes to create genuine change in the community.

With the recent Stand Up EPA rally and movements to make change in EPA, Li hopes that this ongoing trend of continues in the future.