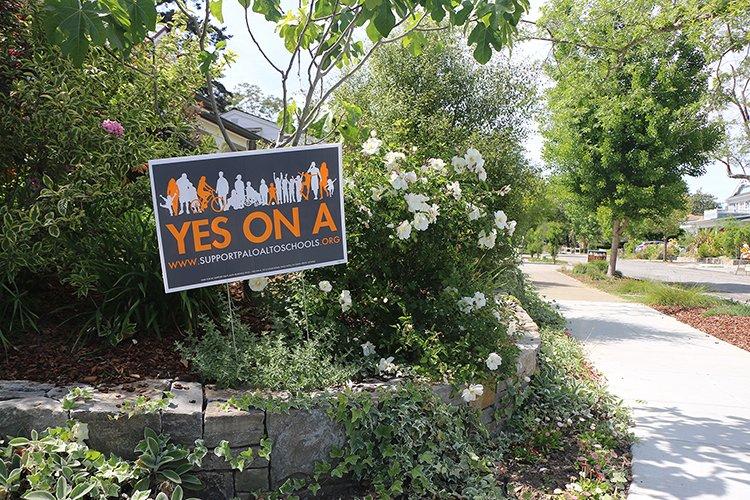 The parcel tax increase, paid for by all Palo Alto residents except for seniors and renters, will be voted on the May 5 ballot.

Measure A, the Palo Alto Unified School District (PAUSD) parcel tax increase, will be on the ballot on May 5. Palo Alto voters must decide whether or not to renew the current tax, which expires on July 1 of next year, for a new six year term.
Measure A includes an increase in the tax amount, from the current tax of $638 to a new tax of $759. If Measure A is approved, it will generate an estimated $14.7 million in revenue for the district to pay for investments in student health and wellness efforts, academic supports for struggling students, and for Science, Technology, Engineering, Arts and Mathematics instruction (STEM).

Parcel taxes are paid by all property owners, with the exception of renters and seniors, as part of the annual property tax. The tax is paid regardless of whether the owners have students enrolled in the school district.

Many opponents of Measure A, and of a parcel tax in general, argue that the tax is unfair because people who do not use the school still have to pay it, and because different people with different income levels all have to pay the same amount.

Others, however, believe that setting such a standard of contribution will be beneficial for the community and schools in Palo Alto.
“Any way you calculate the amount to be paid will be deemed unfair by someone,” an anonymous Palo Alto High School parent said. “As far as whether those who don’t have children in schools should pay for the tax, one must think of this just like any item in a community that is being shared by everyone regardless of usage.”

PAUSD uses this tax to fund about seven percent of its budget. The previous parcel tax, approved by voters in May 2010, generated about $12.4 million per year. These funds are managed locally by PAUSD and cannot be taken away by the State or other school districts.

“I would rather support the tax expenses,” junior Jenny Xin said. “I don’t want to see programs cut because we, on our city’s average income, can afford to provide our students with a well-rounded education but choose not to.”

PAUSD Board member Ken Dauber said in a statement that the parcel tax not only pays for 85 full-time school staff but also supports various programs such as social and emotional wellness of students of PAUSD district, addressing the achievement gap and the introduction of foreign languages in elementary schools.

“Some elections present hard choices,” Dauber said in the statement. “This isn’t one of them.”

However, opponents of the measure even complain that the information about Measure A available to voters is confusing, lacking clarity on whether or how the funds will be applied to elementary or high schools.

“[We should] review the current budget and expenses,” an anonymous Paly student said. “Without reviewing where this tax money is going into, there is no way to know whether money is being spend on meaningful things or not. Instead of increasing tax no matter what, I think it’s important to have a good idea of where it’s being used toward.”

Other critics argue that voters should withhold funds until PAUSD addresses some of the fundamental problems facing the district such as academic pressure, stress and the overall mental health of the school students. This is a particularly sensitive subject in light of the student suicides that that have impacted the district in recent times.

The city must receive at least two thirds of the votes from the of the approximately 44,000 registered voters in the district. Residents will recieve and must return their ballots by mail by Election Day, May 5, to be counted. Voters have the alternative of dropping ballots off at the County Government Center.