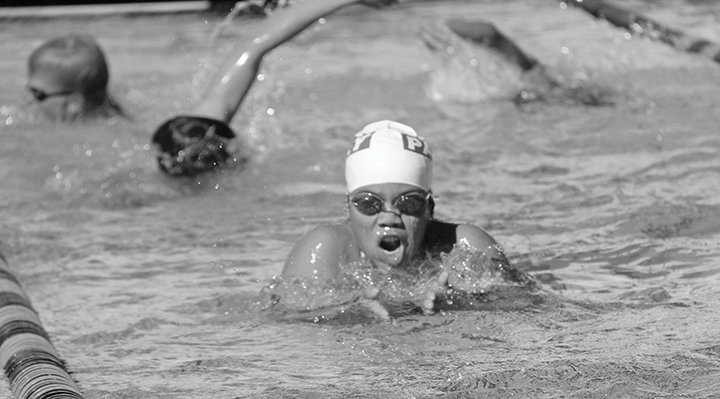 Palo Alto High School’s girls swimming and diving team has continued its stride through the season, finishing some recent meets in wins.

“Since the season is almost over, we are all putting in as much effort as possible at each practice and staying positive. We are also trying harder to focus more on each other and less on ourselves to make our team as a whole faster for the best results at our final meets,” sophomore swimmer Haley Chalmers said.

A recent match against Monta Vista High School on March 26 resulted in a precarious win. The meet required more focus from the team than previous matches.

“We just wanted to win because they’re kind of hard, and we barely scraped through, but we did, we won,” freshman swimmer Emily Zhang said.

After that meet the team made goals for a matchup against Saratoga High School on April 16 and 17,  which paid off in another win.

“I’ve been making sure that I go to every practice offered and take every opportunity I’m given to make myself a better swimmer and to get the results I’ve been wanting at CCS,” Chalmers said.

The team believes that it has good chemistry from team bonding and constantly working to build team dynamics.

The team has added the goal of qualifying for CCS to goals of winning meets. Practices have intensified, building pressure to train harder.

“I think we have a chance at CCS this year and next year too, but this year is the first year we have actually had a solid chance at winning,” Zhang said.

For its meet against Los Gatos High School on April 30, the team has planned to improve technique in order to drop times.