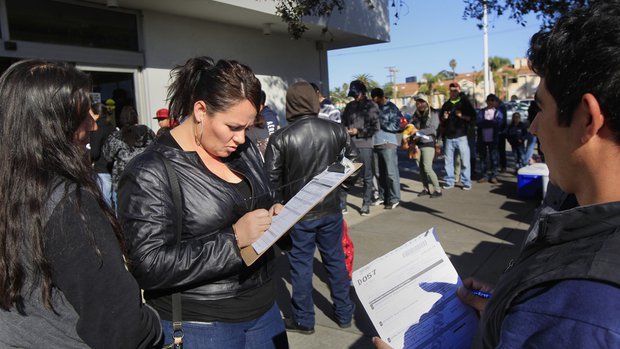 Immigrants line up infront of the DMV to register for the new licensing services.

A California law went into effect on Jan. 2, giving undocumented immigrants residing in the state the ability to apply for and receive state driver’s licenses. Since then, the law, known as Assembly Bill 60 (AB60), has induced far more license applications than expected which in turn has aided in bringing immigration debates to national attention.

“The interest in this program is far greater than anyone anticipated,” California Department of Motor Vehicles (DMV) Director Jean Shiomoto said in April in a press release. “We projected receiving 500,000 applications by July 2015, but have already reached that level and are on track to continue at double the anticipated number of applications.”

AB60 licenses differ from California Driver’s Licenses in that beyond state limits, government and law enforcement officials do not have to accept the AB60 licenses.
In just the first three days of the AB60 program, 46,200 applications were filed and by April 5, a whopping 493,998 applications had been recorded. Over 200,000 immigrants in California have received licenses thus far, with an estimated total 1.5 million undocumented immigrants expected to have applied for licenses by Jan. 2018. In order to accommodate the growing number of license applicants, the California DMV recently hired 900 new employees. Additionally, the state has passed new laws to provide auto insurance at lower costs for those protected under AB60.

“We’re ramping up capacity,” Chris Shultz, deputy commissioner of the California Department of Insurance, said in an interview with The Wall Street Journal.

Prior to 1994, undocumented immigrants could obtain licenses under California law. However, immigration influxes prompted California to revoke license privileges for people illegally living in the state. Now, due to safety risks, illegal immigrants will once again be able to get AB60 Driver’s licenses. With an AB60 license comes an increased level of safety; car accidents and hit and run incidents are expected to be reduced.

“I had to learn how to drive, even if it was a big risk.” Adilene Sanchez, an illegal immigrant, said in an interview with The San Jose Mercury News. Sanchez was pressured to get behind the wheel to drive her children to school and herself to work. With nearly three hours of driving per day, she did not have any other choice.
“Why wouldn’t you want to better identify people who are going to be here?…We could increase safety on roads,” Los Angeles Police Chief Charlie Beck said in a press release.

However, immigrants who receive licenses put themselves in danger. As AB60 licenses are not protected under federal law, the national government could at any time subpoena the DMV for information to stage a mass expulsion of illegal immigrants from the United States.

With far more people receiving licenses than anticipated, hundreds of thousands of immigrants who illegally live in California are now at risk of being deported. Of the estimated total 11.5 million illegal immigrants in the United States, approximately 2.5 million of them reside in California, giving it the largest illegal population. A new era of immigration protection, ushered in by President Obama’s executive order shielding 5 million illegal immigrants from deportation “[America] has given me hope, work, a home and education for my children,” Sanchez said.”