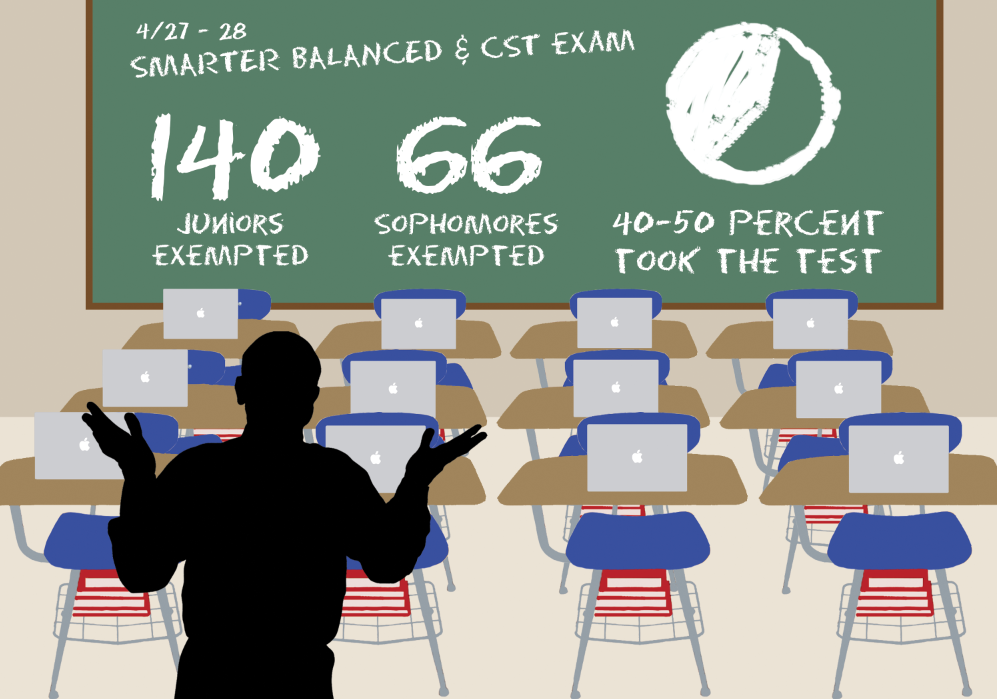 Over half of students skip mandated test

Between 40 and 50 percent of Palo Alto High School juniors took the Smarter Balanced Assessment Consortium (SBAC) experimental exam on April 27 and 28, according to Dean of Students Adam Paulson following preliminary estimates. As of April 29, 140 juniors had opted out of SBAC, almost 30 percent of the class. More are expected to opt out retroactively.

Under California Education Code §60615, any student may decline to take the test by signed written consent, however the California Department of Education typically seeks 95 percent attendance for state-mandated tests. For those that do not opt out, a retake will be given on a future date.

“We will send a list out to teachers and then the students will come to the testing room and take it during class,” principal Kim Diorio said. “But we don’t want juniors missing AP’s, so that makes it more difficult.”

Gov. Jerry Brown has stated that this year’s results will not count towards funding; however, a low turnout will put districts on a high-risk list with the possibility for federal Title I funding to be taken away.

The low attendance will also result in inaccurate data for judging students’ retainment of the Common Core Standards. This invalidity has angered some students that made the decision to take the test.

“I don’t understand why they would make us go through five hours of testing when they knew that it would all be for nothing,” junior Clara Wolfe said.
However, many students chose to opt out due to the poor timing of the test.

“[SBAC] is a waste of four hours and I could use that time to be studying for AP’s and making significant progress in other subjects,” junior Karina Chan said.
The district had a 12-week period in which to administer the exam and historically has given state-mandated tests the week after AP testing, but altered the testing dates to early April, a month before AP testing, during the pilot run of SBAC in 2014, receiving positive feedback.

“We were trying to coordinate our calendar with Gunn, so these were the best two dates we could come up with,” Diorio said. “In hindsight, we would not have done it this week. But we’ll fix that for next year and go back to after AP’s again.”

“Teachers and students lost two instructional days before the AP tests,” Diorio said. “But I think we received important information that will certainly help next year in terms of the time management aspect.”

Sixty sophomores opted out of the CST Life Science test, more than 12 percent of the grade; more are expected to do so in the coming weeks. In comparison, 20 opted out in 2013. Its effect on Academic Performance Indicator scores is unknown to Diorio, but she believes the upward trend is in part caused by recent suicides.

“We just had a student suicide six weeks ago,” Diorio said. “You’ve got to pick your battles as a principal sometimes. I wish more kids took the test but I certainly understand why for some people it wasn’t the best time or best use of their time and I can appreciate that.”

The low turnout rates for SBAC are not unique to Paly, and the protest of excessive testing is becoming a national trend. Recently, in Seattle, Wash. at Nathan Hale High School, 100 percent of the junior class opted out of the test. There have been reports of multiple other high schools in Seattle having turnout rates of less than 15 percent, resulting in a threatening press release by Washington State Superintendent Randy Dorn.

In New York, just over 250,000 students are predicted to opt out. The test has also been criticized for its increased difficulty. On the pilot test, 91 percent of English Language Learners and almost 80 percent of low-income students fell below the proficiency level, which puts districts at risk of losing funding under the No Child Left Behind Act. However Diorio does not predict this for Paly.

“I’m not worried about our results,” Diorio said. “I think our kids are really quite capable of doing well on an exam like this.”